(Note to readers: many longtime fans of 'View From The Cape' will remember the Cape May Birding Hotline, which sporadically called this space home over the past few years. While it is our opinion that a "birding hotline" is no longer truly necessary in this age of instant communication, we do feel that periodical and comprehensive snapshots of Cape May's birdlife are important and beneficial to current and future birders. Observers are encouraged to submit their sightings to Tom Reed [coturnicops at gmail dot com], who will be compiling these weekly reports.)

The period began with the passage of a cold front 14 Sep, which produced decent hawk and songbird flights. A second, weaker cold front cleared Cape May 16 Sep, and was followed by strong easterly winds 17 Sep. High pressure took hold for the rest of the period, with above-average temperatures and southerly winds. Notable birds during the past week included Brown Booby and Lark Sparrow.


WATERFOWL THROUGH CORMORANTS
Two Brant were observed in the back bays 15 Sep (DL et al.), potentially the same pair that spent the summer in the area. A rather unfortunate high count involved 34 Mute Swans on Bunker Pond 15 Sep (TR). The season's first Northern Pintails came by way of a southbound flock of nine over Cape May Point 14 Sep (TR). Interesting was a Northern Bobwhite seen near Davey's Lake 14 Sep (EO). A southbound Common Loon was observed from Cape May Point 20 Sep (TR). Birders who chartered a fishing boat out of Cape May 19 Sep reported a juvenile Brown Booby less than 15 miles offshore Cape May (BE et al.). Northern Gannets are being seen from Cape May Point almost daily, and small flocks of Double-crested Cormorants are now on the move every day.

HERONS THROUGH SHOREBIRDS
An American Bittern put on a great show at Bunker Pond 16 Sep (m. ob.). A noticeable nighttime movement of Great Blue Herons occurred 17 Sep, while at least three Little Blue Herons continue to show nicely at Cape May Point State Park. Raptor flights have been rather light. Selected daily maxima for the period included 36 Bald Eagles, 152 Ospreys, and 201 American Kestrels on 14 Sep, and 179 Sharp-shinned Hawks on 20 Sep (TR). At least one Sora has been reported from the SCMM in recent days. Strong northeast winds likely helped bring five Hudsonian Godwits over the CMHW 17 Sep (TM, m. ob.). Two Marbled Godwits were viewed in the back bays from The Osprey tour boat 16 Sep (fide VE). The season's first Buff-breasted Sandpiper finally flew past the CMHW 19 Sep (TR), and a Baird's Sandpiper flew past the CMHW 16 Sep (TR). 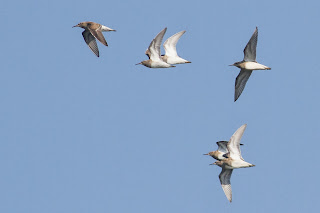 [Shorebirds continue to trickle through Cape May Point. This flock of Pectoral Sandpipers
flew past the hawk watch 18 Sep. Photo by Tom Reed.]


GULLS THROUGH WOODPECKERS
Lesser Black-backed Gulls have been easy to find along the CMPSP and SCMM beachfront, with eight present 16 Sep (TR, EM). Multiple Parasitic Jaegers can be seen in "the rips" from Cape May Point on a daily basis. There have been no reports of the juvenile Long-tailed Jaeger since 13 Sep. At least two Eurasian Collared-Doves remain at Cape May Point. Black-billed Cuckoo reports have been few, so it's worth noting one present at the CMHW 17 Sep (TM). Two Red-bellied Woodpeckers and a Hairy Woodpecker that flew past the CMHW 19 Sep were likely migrants (TR). 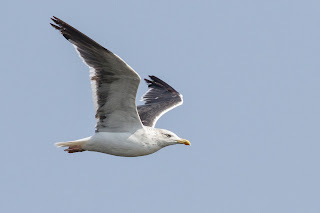 
FLYCATCHERS THROUGH THRUSHES
Single Olive-sided Flycatchers were found at the Beanery (RH, KH, et al.), Higbee Beach (m. ob.), and Reed's Beach (KK, DR) 14 Sep. Philadelphia Vireos have been rather scarce this year, with only a handful of recent reports. Noticeable swallow movements occurred on multiple days during the past week. Small numbers of lingering Purple Martins could still be found throughout the period, and 40+ Cliff Swallows were over Cape May Point 19 Sep. The season's first Ruby-crowned Kinglets descended upon Cape Island 14 Sep (m. ob.). Observers who have spent time listening for nocturnal migrants were rewarded with the season's first Gray-cheeked Thrushes calling over multiple locations 15 Sep (MO'b, DF, TR).

WARBLERS THROUGH FINCHES
Warbler numbers during the period were unremarkable. A post-frontal movement on 14 Sep was headlined by three Connecticut Warblers and a late Cerulean Warbler at the Higbee Dike (GD, SG). Reports of birds on the ground have been sparse, though a Kentucky Warbler was reported at Higbee 20 Sep and small, mixed species feeding flocks can be found around Lily Lake some days. News from the sparrow department is still quiet, though that should soon change. A Lark Sparrow was found near Davey's Lake 14 Sep (EO).