It's official - Michael O'Brien doesn't play fair!! What would we all give to have Michael's sharpness of ear and keenness of eye? And also his ability seemingly to never sleep and always be working the local patch. Michael was driving (yes, he even finds rare birds when he's driving!) along Lighthouse Avenue and paused just for a second to check for butterflies at the small triangle garden on the corner of Lighthouse and Coral - when he heard a Calliope Hummingbird calling. That's right, not seen, heard calling!

This gem of the Western US spent time feeding at the wonderful clumps of Pineapple Sage that grow along the edge of the triangle garden, just behind the Cape May Point boat that adorns this corner of Lighthouse Avenue. Between feeding sessions, it perched high in Persimmons and oaks on either side of Lighthouse and Coral Avenues. If you are looking for this bird tomorrow, be sure to park wisely and be mindful of traffic coming into the north end of Coral Avenue from Lighthouse Avenue.

This individual is only the seventh Calliope Hummingbird to be found in New Jersey and the fifth for Cape May County, with all records to date occurring in October or November. Compared with Ruby-throated Hummingbird, Calliope is even smaller, being just 3.25 inches long (compared with 3.75 inches for Ruby-throated), but at least some of this difference in size is due to Calliope's relatively shorter tail and bill. It is amazing to imagine a bird, weighing in at just one tenth of an ounce, heading all this way from breeding grounds in western North America - Calliopes breed from southern British Columbia, south to eastern California and Utah and breed no closer to New Jersey than Western Wyoming; they are essentially a bird from West of the Rockies. Their migration takes them south to the Pacific slope of southern Mexico for the winter. 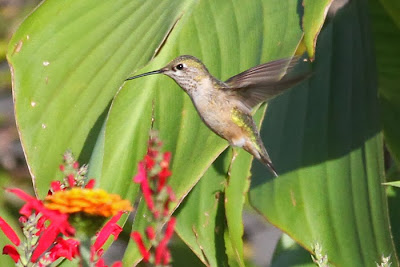 Two pictures (above) of today's Calliope Hummingbird at Cape May Point, with one picture (below) of a Ruby-throated Hummingbird for comparison. Identification of the smaller hummingbirds can be very difficult in the field but, comparing the two species here, note the Calliope's relatively finer bill and shorter tail. Note also that Ruby-throated has a solidly black loral area between the eye and bill, while Calliope has a small but diagnostic white stripe above the gape line at the base of the bill [photos by Mike Crewe]. 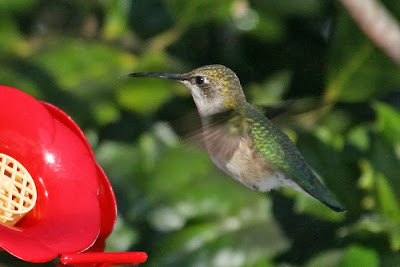