After yesterday's yucky, rainy weather, it was nice to be back out in the field today and doing some preliminary scouting for our New Year birding walk on January 1st. Though we have had the odd cold snap, this winter has so far been pretty mild, meaning that a good range of birds can be found around Cape May right now. Of course, right up at the top of the list of targets for January 1st will be a Snowy Owl and, with perhaps five birds still around in the area, there's a reasonable chance that we will stumble across one. Ducks will no doubt feature strongly too, and with the weather looking chilly but dry over the next couple of days, hopefully there will be no big freeze to push birds off the Cape May Point ponds. Today, I found Redheads at two locations, including four males and a female at the state park, while Hooded Mergansers and Buffleheads were in full display at several sites. In The Rips, a good movement of Northern Gannets, Long-tailed Ducks and Surf Scoters was taking place this morning, a Bald Eagle made a fine sight as it headed out (over a Snowy Owl!) to hunt and Purple Sandpipers were on the jetties.

Two Western Kingbirds look set to spend the winter with us (if the weather holds) at Cresse Lane, off Route 9 in Erma. The birds favor the edge of a vineyard at the east end of the lane, just north of the wildlife management area. Please note that this vineyard is private property and should not be entered without the owner's permission - I hear that one or two visiting birders have recently forgotten this common courtesy.

Other recent birds include a Ross's Goose with the Snow Goose flock north of Reed's Beach on 26th (which may still be present but this is a difficult site to view), Orange-crowned and Nashville Warblers and a Common Yellowthroat at Cresse Lane on 27th and a White-winged Dove at Cape May Point on 27th to 29th at least. A Rufous Hummingbird also continues at a feeder at Cape May Point. 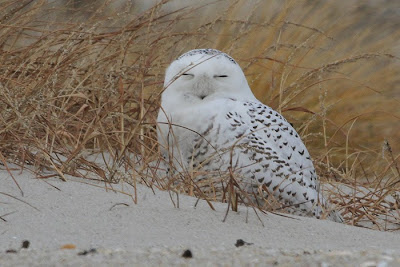 Snowy Owls continue to delight birders along the Jersey Shore and offer us a great opportunity to share some great viewing with members of the public. This male has put in a few guest appearances around Cape May Point over the past 10 days or so but mostly seems very good at staying out of the limelight. While much media concern continues to get people stressed over the plight of these 'starving' birds, studies of trapped birds have shown them to overall be fit and healthy [photo by Mike Crewe]. 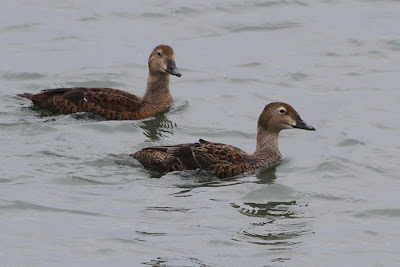 These two female King Eiders have been hanging around the free bridge at Nummy's Island for some time and hopefully will continue to do so into the new year [photo by Mike Crewe]. 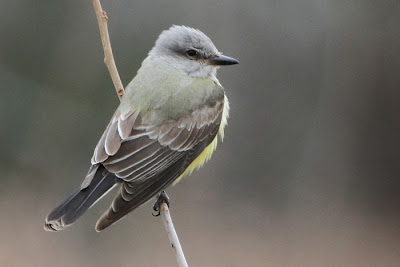 One of two Western Kingbirds that have been along Cresse Lane in Erma since at least December 15th [photo by Mike Crewe]. 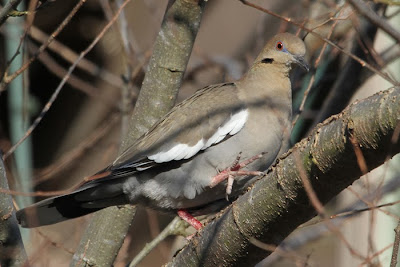 This White-winged Dove was an unexpected bonus to the end of the year and has most often been seen along Harvard Avenue, Cape May Point since it was first discovered on December 27th. It was quite a few feathers missing from the left wing so may perhaps have clipped an overhead cable [photo by Mike Crewe]. 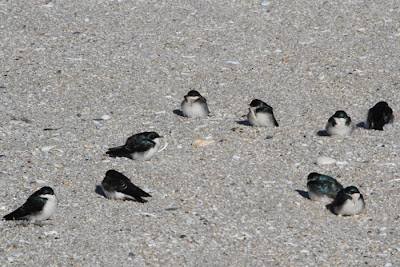 As if to highlight how mild it has been, this group of Tree Swallows, resting on the South Cape May Beach was part of a flock of 24 birds seen there on Christmas Day [photo by Mike Crewe]. 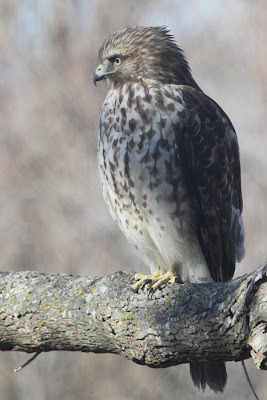 And finally, don't forget two things: a) always keep an eye on your own back yard and b) always keep the camera handy! This juvenile Red-shouldered Hawk was photographed one-handed, through my living room window, while I was in the middle of a phone call with Richard Crossley - thank heavens for image-stabilized lenses!!! [Photo by Mike Crewe]

With the CMBO offices closed between now and New Year, booking for our January 1st Kick off your year list walk is tricky - and there are still just a few places left. If you wish to attend and haven't booked yet, you can show up at Cape May Point State Park for a 10AM start, but do come with cash in hand to pay on the day.
Posted by Mike Crewe at 3:29 PM