The best of starts to the New Year

CMBO's annual New Year's day in the field event could not have gone better yesterday. The day was chilly but easily bearable as cloudless skies accompanied our group pretty much all day, right through to a magnificent sunset over Stone Harbor Point. We started at a comfortable 10AM, allowing the early birders time to do their own thing first thing if they wished - you know how some people simply can't resist being up at first light - while others could ease themselves into the New Year after some heavy celebrating the night before.

Cape May Point State Park always serves as a good starting venue for this event and Bunker Pond provided a few ducks and other waterfowl to get us going. Raptors were up early too and Bald Eagle and Red-shouldered Hawk were both early additions to the day's list. Indeed, I think we managed to notch up no less than four Red-shouldered Hawks before the first Red-tailed Hawk made it onto our list. Having broken ourselves in early with a nice run of the regular stuff, we quite quickly found ourselves plunging headlong into one good bird after another - almost without time to catch our breath. An American Tree Sparrow beside Bunker Pond is certainly a common bird in northern North America, but remains a much desired species for the regulars of Cape May. While only the back two or three members of our party managed to see this bird, it looked like being 'bird of the day' for some, or at least it did for not much more than 20 minutes! That's because the message got through to us that a Painted Bunting had just been found  - and it was almost within sight of us! We quickly changed direction, headed for Harvard Avenue and, before long, our entire group was enjoying an emerald green beauty as it fed acrobatically on grass seeds. Now the quick fire birding began, for we only needed to cross the road to add White-winged Dove to our list, then headed just a couple of blocks to enjoy the Rufous Hummingbird that has taken up residence at Bill and Edie Schul's feeder. Birding really shouldn't be this easy! By way of a busy party of Dark-eyed Juncos, House Finches, Cedar Waxwings and a Red-breasted Nuthatch, we headed back to the state park via Lighthouse Pond and quickly added Eurasian Wigeon and Redhead to our lists.

During the short days of winter, the afternoons always seem to just disappear while you are not looking; after a lunch break, we met back up at Two Mile Beach and braced ourselves for the chilly seafront. The walk was well worth the effort and a magnificent male Snowy Owl was our main prize. Hmmm, Painted Bunting, Snowy Owl, White-winged Dove  - look at the distribution maps and see if you can work out where in the world that could happen!! The beach also gave us a nice run of seaducks, loons and shorebirds, before we headed a little further north to take in Greater and Lesser Scaups, Horned Grebe and courting Buffleheads at Sunset Lake. It's not too far from Sunset Lake to Nummy's Island - though a little convoluted by road - and before long we were back into the thick of good birds yet again. This time our highlights included the two female King Eiders that have been hanging out at the free bridge as well as a good gathering of American Oystercatchers and a perched Northern Harrier. Still a little daylight left and one last chance for the keenest members of the group to round the day off with a couple of Semipalmated Plovers and, finally, close encounters with a busy party of Snow Buntings as the sun set gloriously behind us.

What an amazing start to the year we had and what a great way for Cape May to show - yet again - why it draws birdwatchers from near and far. I hope you all had as great a New Year as we had, where ever you are and whatever you were doing. Here at CMBO we stride forward into a new year, and we hope that our program of events offers something of interest to you. Check out our event calendar, pick a weekend and come and share some great times in the field with us.... 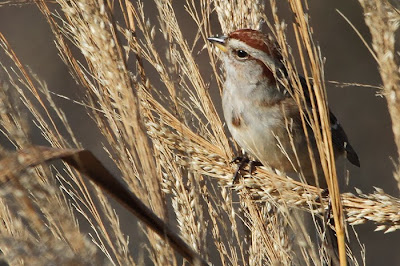 This American Tree Sparrow may not have hung around too long on the day, but it was certainly a nice addition to some people's lists as it fed with Field Sparrows beside Bunker Pond. Interestingly another was reported from Sea Isle City later the same day [photo by Mike Crewe]. 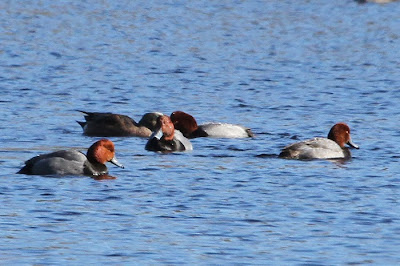 As with the tree sparrow above, Redhead is a species that is common further north but remains a good bird to see in Cape May. Recently up to six Redheads have been reported from Lighthouse Pond at the state park, including this smart group of fine males (wtih an American Wigeon) that we saw on New Year's Day [photo by Mike Crewe]. 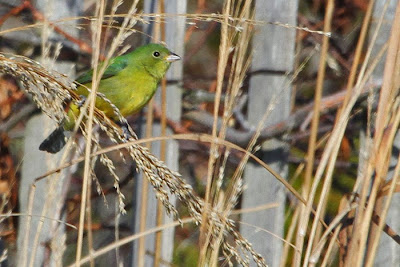 This stunning Painted Bunting was found by Stephanie Brown in the dunes at the south end of Whilldin Avenue at Cape May Point as she tried to find a better spot to view the White-winged Dove from - some people get all the luck! [Photo by Mike Crewe] 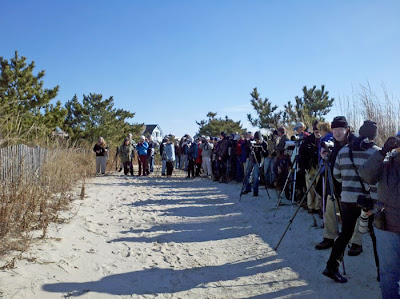 Can you pick yourself out in the crowd? The Painted Bunting drew quite a crowd yesterday and, though its presence in our area now appears to have been short-lived, it showed really well to all those present on the day - and the White-winged Dove was in the pines to the left! [Photo by Mike Crewe] 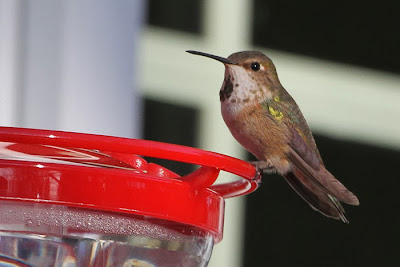 Rufous Hummingbird at Cape May Point yesterday - the forecast looks decidedly bad for this bird over the next few days as a winter storm menaces its way through our area. Expect a lull in birding for a couple of days, then we'll head out to see what's happening out there... [photo by Mike Crewe] 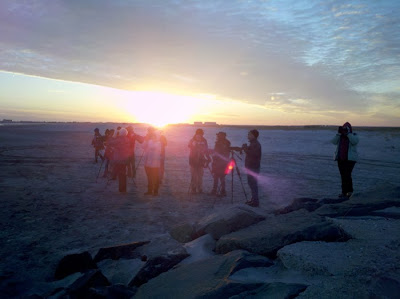 And so the day draws to an end. A little seawatching then Snow Buntings at Stone Harbor rounded off a great day in the field. Check out our Field Trips page for a list of species enjoyed by the group [photo by Mike Crewe].
Posted by Mike Crewe at 5:17 PM