What a difference a day makes - or two anyway! It seems barely five minutes ago that we were enjoying wonderful sunny skies and a great selection of rather exotic birds for the time of year. But that was January 1st and it was a very different Cape May that greeted the eyes of local birders this morning. Snow lay round about after an overnight front passed through and temperatures plummeted. Despite temperatures well below freezing (17F/-8C according to my car), most of us were out in the field first thing and experiencing some great birding. Here's a resume of Cape May today in pictures. 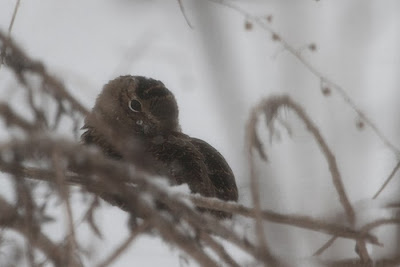 You know it's going to be a good day when....... you look out of the window and see a woodcock in the flowerbed! American Woodcock are most easily found when there is snow on the ground, as their wonderfully cryptic plumage is designed to hide them in the browns and goldens of fallen leaves [photo by Mike Crewe]. 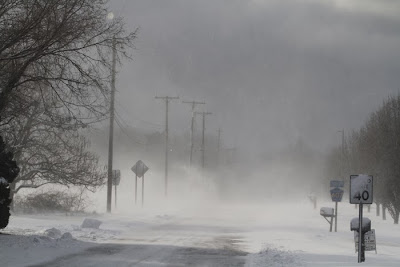 I must admit that when I set off for Cape May Point this morning, conditions didn't look all that inviting! Gray skies and drifting snow obscure Bayshore Road [photo by Mike Crewe]. 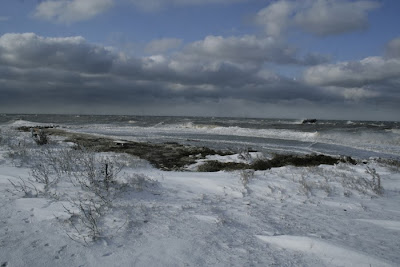 Things were no better at Sunset Beach - indeed, Sunset Beach was actually nowhere to be seen as storm surges washed right across the sand to the edge of the parking lot. The concrete ship looks suspciously as though it has taken a big hit overnight too [photo by Mike Crewe]. 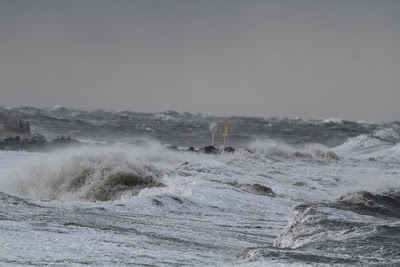 Despite harsh conditions (here's a view of the stone jetty at Alexander Avenue), Mike Pasquarello, Sam Galick, Chris Marks and I dug in for a while and witnessed southbound movements of Long-tailed and Snow Geese out over the bay [photo by Mike Crewe]. 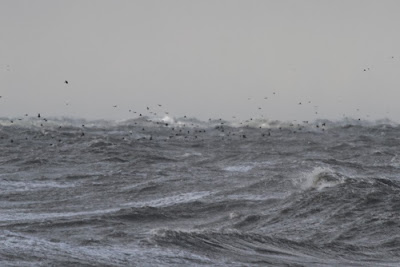 Most obviously on the move today - Common Grackles. Scores of them were pouring out into the turbulent winds over Delaware Bay and many of them returned pretty quickly! [Photo by Mike Crewe] 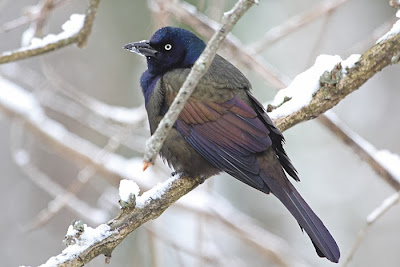 Common Grackles were everywhere at Cape May Point today and ravenous flocks of them took charge of every backyard feeder they could find. But this gave an opportunity for closer scrutinty of what is a pretty snazzy bird at close quarters. Unlike our locally-breeding Common Grackles which are largely glossed bluish-purple, many of the birds around now have bronze-olive body feathers, indicating that they are from more northerly breeding populations [photo by Mike Crewe]. 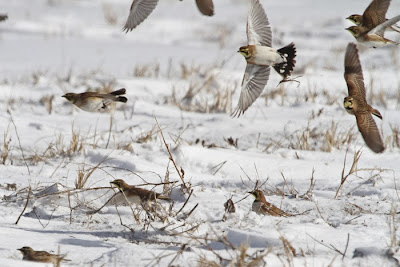 Braving the tough conditions, at least 32 Horned Larks were feeding on the Rea Farm fields at the intersection of Stevens Street and Bayshore Road. Small flocks of this species were coasting along the beaches at the point today too [photo by Mike Crewe]. 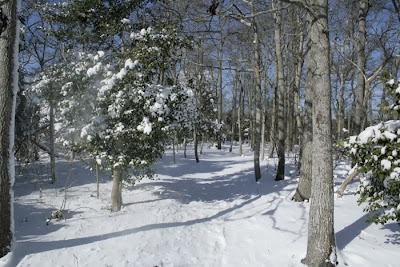 Calm is restored! As the morning wore on, blue skies and bright sun brought more bearable weather, though temperatures remained well below freezing and is really wasn't easy staying out for too long without regular tea breaks. Cape May Point State Park looks very different in January to autumn views that most visitors are familiar with [photo by Mike Crewe]. 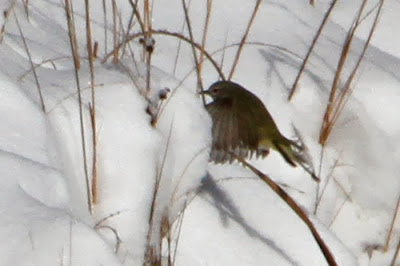 A walk around the state park revealed a great many birds present, all intent on finding enough food to survive in the sudden, harsh conditions. Some must surely wish they had headed further south for the winter, such as this Orange-crowned Warbler which constantly flicked its way along the back edge of the Plover Ponds. A good camera lens can do wonders for your identification skills when it comes to distant birds! [Photo by Mike Crewe] 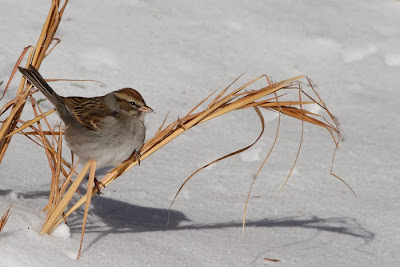 As if further proof were needed. Sadly, so much native habitat around Cape May has disappeared under a 'devil may care' attitude toward wildlife. Manicured lawns provide zero feeding opportunities for hungry birds at this time of year and Chipping Sparrows were flocking to feed on stands of seeding Virginia Beard-grass at the state park today. There's no need to turn the whole 'back forty' over to a disheveled appearance, but there's no harm in leaving a few uncut borders so that our native wildlife has a chance to make it through the winter [photo by Mike Crewe]. 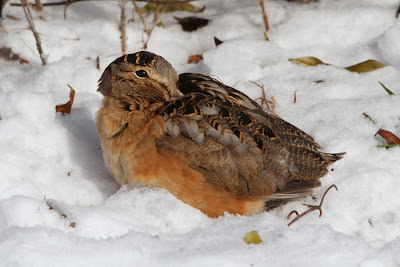 With improved weather, it was easier to get better views of American Woodcock that had been driven out of frozen woods to seek food on the unfrozen edges of roads. This bird was one of three seen along Sunset Boulevard today [photo by Mike Crewe]. 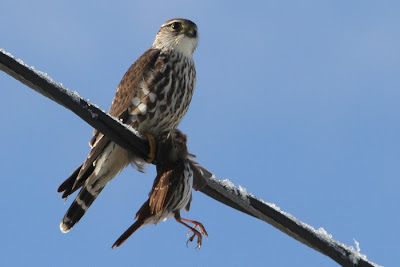 Nature red in tooth and claw. Severe weather always highlights the 'eat or be eaten' world that birds must exist in. This Merlin had just caught a Fox Sparrow on Lighthouse Avenue, which certainly drew out divided loyalties in me... [photo by Mike Crewe] 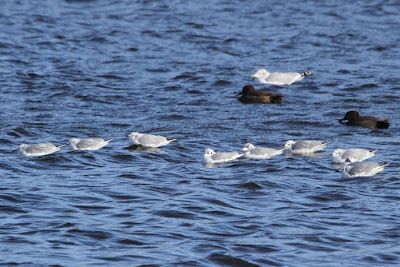 Rounding the tour of the point off just after lunch, a quick check of Lake Lily revealed a flotilla of Bonaparte's Gulls roosting out on the water - a sure sign that things are rough offshore, as these birds rarely alight on the freshwater ponds around Cape May [photo by Mike Crewe]. 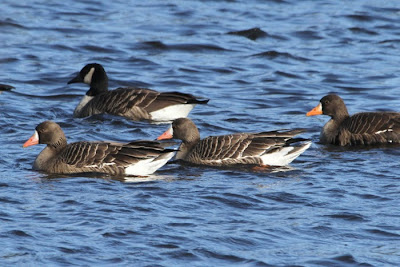 The final highlight of the day - for me at least - was a party of five Greater White-fronted Geese on Lake Lily (I hear that others reported seven in total here today). This is a scarce bird in Cape May and a group of this size is certainly unusual. Normally, I would expect a group of five birds to be a family party, but it is hard to be sure of the age of geese at this time of year. Juvenile White-fronts have no white on the forehead, but this is progressively molted in from mid-winter onward. Looking closely at the birds, the individual on the right is rather different to the others, having less white on the forehead, but a brighter orange bill and signs of black barring on the belly [photo by Mike Crewe].

Temperatures look set to remain low for some time to come, but south-east winds tomorrow may make it worth checking for seabird movements, especially Razorbills and maybe Dovekies. If you aim to set out into the field tomorrow, be sure to check the weather forecast, stay warm and stay safe...
Posted by Mike Crewe at 8:33 PM