It's been pretty chilly here lately and the forecast is promising more to come but, so long as the roads remain clear, there's no reason not to be out birding. Just remember to keep wrapped up in a lot of layers and always know just how many minutes away the next supply of hot tea or coffee is (maybe we should mark that on our bird maps!!).

So what to do, where to go when the weather is like this. Well, winter is mostly about raptors and ducks, two groups of birds that spend the colder months in good numbers with us here at Cape May. As we head toward February, seaducks are really starting to get into their courtship behavior now, so the inlets between the barrier islands are great places to spend some time. Scoters and Long-tailed Ducks are really getting into full swing now and the latter should be magnificent around the time of our Longtails in Love program, which we always set around the nearest weekend to Valentine's Day (see, we're all heart!). Many species of ducks pair up during the winter and, because of this, the drakes look at their best at this time of year. For me, two of the very best sounds of the entire year are the caterwauling of male Long-tailed Ducks and the long, drawn out and slightly forlorn whistles of Black Scoter, noises that really make a winter's day on the coast.

As long as the local lakes stay ice free, ducks that favor freshwater areas can be fun to watch in winter too. Many of these ducks are also in their very best finery now and there will be much whistling as well as pushing and shoving among the American Wigeon hordes. If you are watching groups of ducks at this time of year, look for the different feeding strategies that they employ. Diving ducks such as Ring-necked Ducks and Redheads dive below the surface to bring up weed to eat, while habitual 'thieves' such as American Wigeon and Gadwall will steal morsels away from the diving ducks once they bring food to the surface. In contrast, Northern Shovelers perform an amazing ballet as pairs, or sometimes small groups, circle around each other, each bird filtering through the food-rich water that is kicked up by the feet of the other bird.

So now you are out of the house, wrapped up warm and you've had a great time watching ducks. As the sun sinks lower in the sky, it's time to head to the backbay saltmarshes, for it is now that wintering raptors will be starting to gather before going to roost. Many species of raptor have the habit of roosting communally; this may partly be because good, safe roost sites are at a premium and it may partly be because there is safety in numbers. If you are birding the Cape May area, use our online bird map to identify locations around the saltmarsh where there are good watchpoints - or head for similar places closer to home if you are not in our area. Be there an hour before the posted sunset time and just scan carefully and see what happens. Sometimes it can be quiet, but other times, the birds will amaze you. This past weekend saw the first count of our annual wintering raptor survey and early results suggest that it is a good year locally for Northern Harriers, and the best year for some time for Short-eared Owls. On Sunday evening, one of my sweeps of the backbay marshes produced 15 Northern Harriers, five Bald Eagles and three Short-eared Owls all in flight, with two Red-tailed Hawks perched neraby too. All of this is an encouraging sign since so many raptors suggests a healthy environment rich in prey and perhaps indicates that small mammal populations have recovered well after the crash in their numbers caused by Hurricane Sandy. 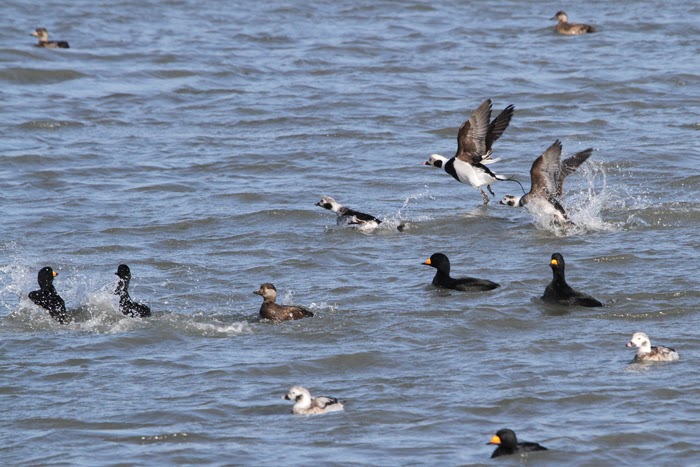 Seaducks are gathering around the inlets now and there's much activity as courting comes into full swing [photo by Mike Crewe]. 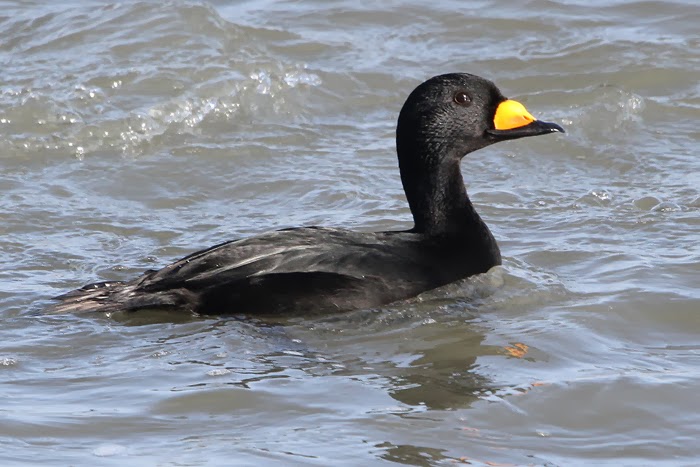 Shining like dayglow beacons, the orange snout of a male Black Scoter can't be missed and makes this a really eye-catching duck - despite the very plain plumage [photo by Mike Crewe]. 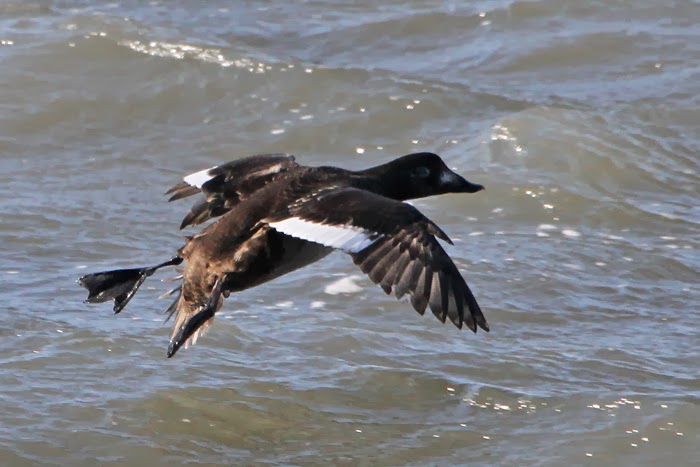 In contrast to Black Scoter, sadly I have to say that White-winged Scoter comes across to me as the most tedious duck in the world - and that's from someone who likes ducks! If you can get one to fly in and land next to you though, you do at least get to see that nice white wing patch! Note that White-winged Scoter has the white at the back of the wing, not as a bar in the middle of the wing like many other ducks [photo by Mike Crewe]. 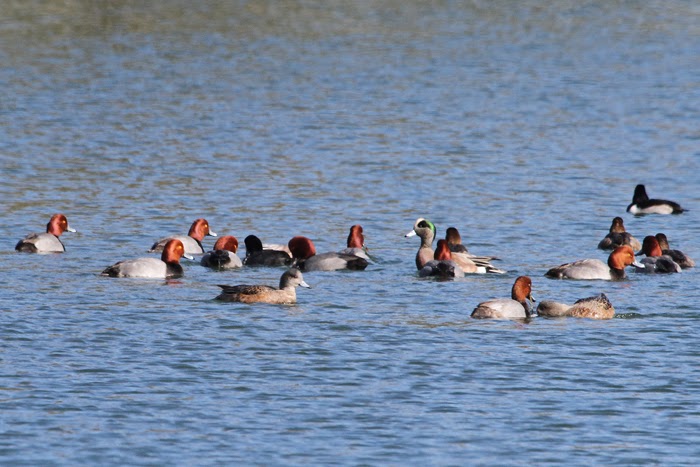 Though Redhead is a common wintering species in North America, it is regular but scarce in Cape May, with a sighting of three together being noteworthy. This year, however, we have been graced with a nice gathering of these smart birds and the picture shows part of a flock of 18 (12 males) on the main lake at Cox Hall Creek WMA in Villas. Note the female American Wigeon, bottom right, pinching weed from the male Redhead! [Photo by Mike Crewe] 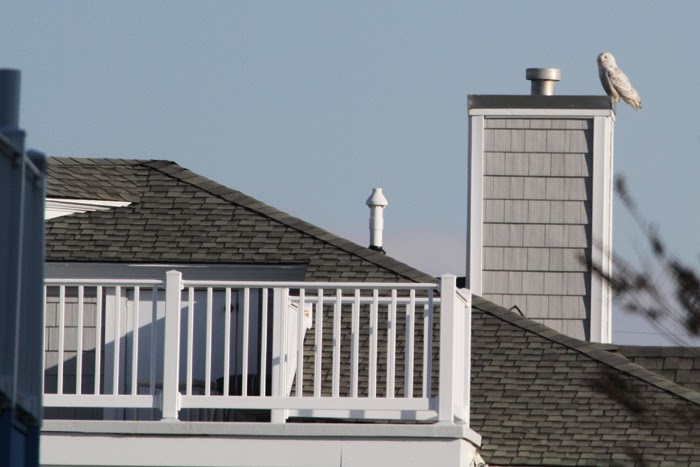 Of course, if you are out and about in the area this winter, you have the added bonus of the chance of a Snowy Owl when you least expect it. It seems that the Snowy invasion has settled down a little now and those with wanderlust have moved on, while those that are left are settling into regular routines and maintaining winter feeding territories. Some of these birds are resorting to roof sitting - the bird above has become a regular in the streets at the south end of Stone Harbor for some weeks now, while a rather elusive bird pops up periodically around the streets of Cape May City. Next time you see one of those plastic owls atop a building on the barrier islands - give it a second look..... 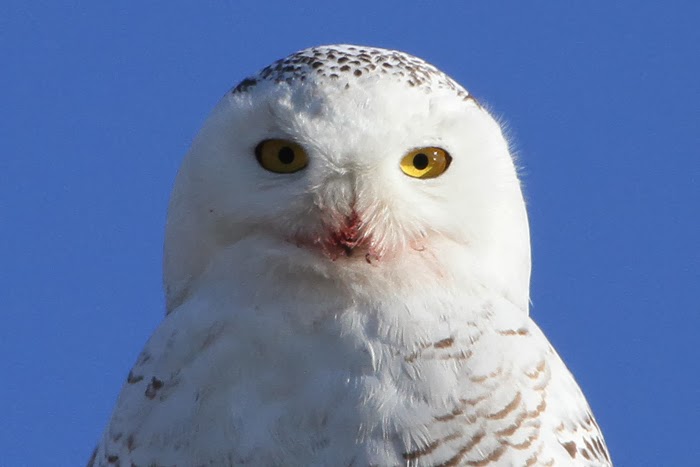 .....because it might be looking back at you!! Do please remember to give these birds a bit of space though. A quick photo taken from your car, and the bird still sat there after you drive away is a good sign. We're still getting all too many reports of birds on the beaches being pushed from pillar to post. Just remember, you might be the 20th person that has enjoyed that bird today. At least in the picture here, you can see that this guy has had a good meal lately! [Photo by Mike Crewe] 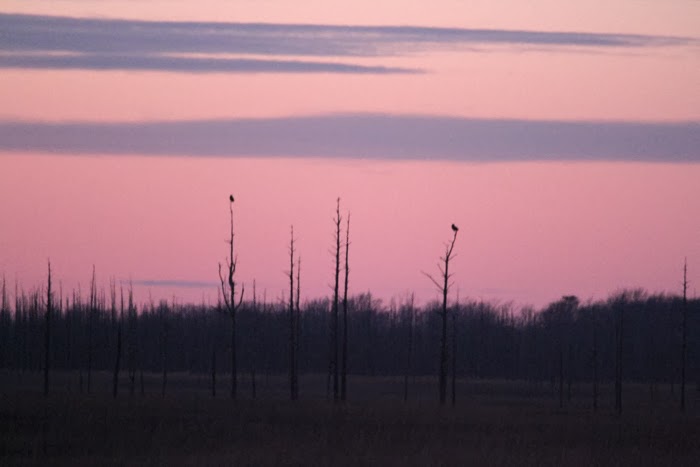 The very best way to round off a day in the field in winter - the pastel pink and purple shades of a watery winter sunset, set off by the sinister silhouettes of a pair of Great Horned Owls. Don't forget that the Cumberland Eagle Festival comes around again on February 8th and we shall be out there lining up the birds in the scopes for you - and traditionally, we often finish with Great Horned Owls at Turkey Point... [photo by Mike Crewe]
Posted by Mike Crewe at 2:30 PM