One of the hardest - perhaps the hardest - identification problems that east coast birders find themselves faced with from time to time is that of sorting out Black-capped and Carolina Chickadees. Here at Cape May, we can often afford to be a little glib by saying "That's a Carolina Chickadee, you don't get Black-caps here". Well all that is changing it seems; as recently as December 2010, Mike Fritz got kudos for the first fully accepted record of Black-capped Chickadee for Cape May County. This bird had been at Mike's back yard feeder in Seaville and had obligingly stayed for good photographs to be obtained. It also stayed long enough for a number of other birders to get to see the bird and stayed into early January 2011. Tom Reed found a Black-capped Chickadee at Palermo on March 4th 2011 which, being but a stone's throw from Seaville, may perhaps have been the Seaville bird, but it stands as the second county record.

For the rest of us, we had to wait until January 2014 and a fortunate turn of events. Michael O'Brien and Louise Zemaitis were waiting for a plumber to show up to a leak on Lincoln Avenue at Cape May Point and decided to casually watch the birds visiting a neighboring feeder. Low and behold, one of the chickadees looked decidedly different and before you know it, Cape May's third Black-capped Chickadee is safely in the record books! Such chance encounters as this of course help us to realize that many unseen birds no doubt go unrecorded and the official record is merely a list of those birds that have been duly found, correctly identified and finally accepted by the relevant records committees.

So what chance is there for the rest of us in either finding and identifying the current Black-capped Chickadee at the point, or of finding one of our own? Well first off is location of course. The two eastern species of chickadee (Black-capped and Carolina) are classic 'replacement' species, ie one replaces the other as you head north/south or up/down the hill. Black-capped is the northern form, only occurring southward if you head up into the Appalachians. A quick look at the range maps in any North American field guide should help you to work out which species occurs where you live - or where you are visiting. Thankfully, the two species are pretty much sedentary and vagrants outside of the normal breeding range are uncommon; however, there is a catch (of course!). Where the two forms meet, there is a small overlap zone where you could find either species; if you live there, you will have to be really careful. To make matters even worse, the two species interbreed with each other along this overlap zone and there is now a substantial area within which confusing hybrids abound. This hybrid zone is being closely studied - mostly in north-eastern Pennsylvania and New Jersey - and the zone appears to be moving very slowly northward, suggesting that Carolina Chickadees are pushing their range further north.

Putting the complexities of hybrids aside for a moment, it's time to consider the important identification points of the two species. The differences between the two are all rather subtle, but when you take all of the differences together, they add up to make two reasonably different species which can be identified fairly readily if you get a good view - or better still, good photos. Here's some photos of the Cape May Point bird to get you headed in the right direction. 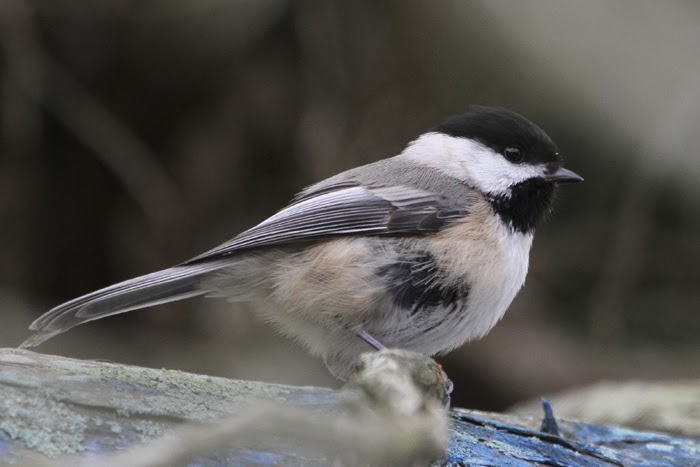 Black-capped Chickadee at Cape May Point on January 5th 2014. The bird has been visiting a feeder in the front yard of 102 Lincoln Avenue, easily found by the blue-painted tree in the front yard. If you go looking for this bird, do remember that this is a residential area and behave appropriately [photo by Mike Crewe]. 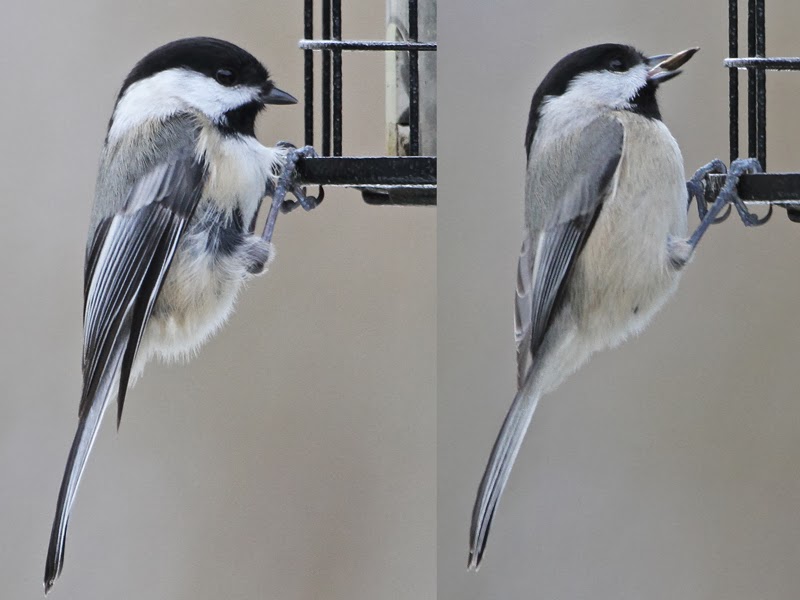 Photo composite of Black-capped (left) and Carolina (right) Chickadees, visiting the same feeder at Cape May Point. Seeing the two side by side like this should hopefully help you to pick out the key differences - a bit like those puzzles where you have two versions of a single picture, one slightly altered, and you have to spot the ten differences. In these unedited pictures, note that the Black-cap has a dark patch over the right leg, caused by a bunch of missing feathers [photos by Mike Crewe]. 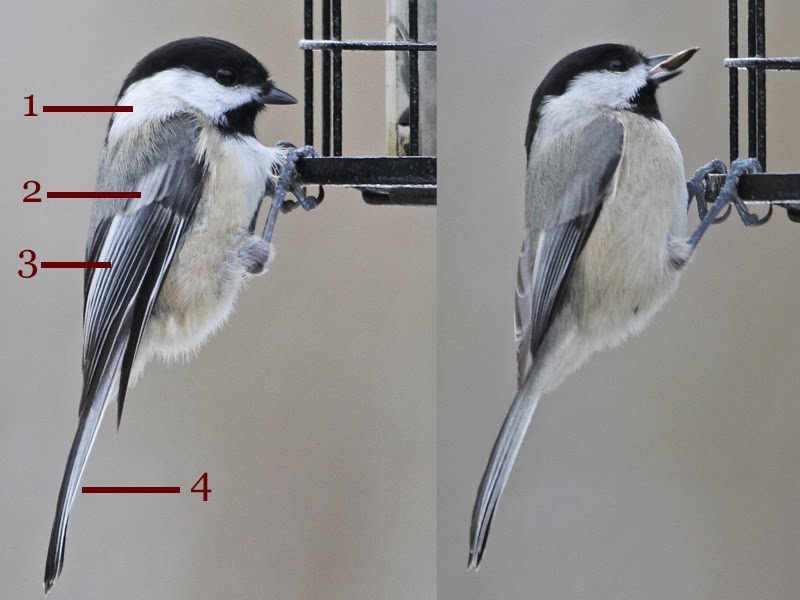 Here's the same photo composite as above, but edited. I have removed the dark patch on the flank of the Black-capped Chickadee to stop it hindering direct comparison with the Carolina Chickadee on the right. The text below works through the four useful identification pointers marked in the photo [photos by Mike Crewe].

1. Structurally, Black-capped looks subtly a little larger headed than Carolina and it is slightly larger overall (averages 5.25" long versus 4.75" for Carolina according to the Sibley Guide). You should view any possible rare bird for as long as possible, to assess differences in a variety of poses and under different lighting conditions as this will help to eliminate false effects that may be caused by shadow, strong light, or simply viewing two birds in very different postures. In ideal conditions, the white on the face of a Black-cap extends further back onto the side of the neck. In Carolina, this white area shades slightly to grayish behind the ear coverts, onto the side of the neck.

2. Perhaps the most obvious feature if seen well in a good side view is the color of the greater coverts. In Black-capped Chickadee, at least the inner four or five greater coverts are noticeably white and, together with the clean white edges to the secondaries form a bold splash of pale on the wing. Some caution is needed here as this feature is a little variable, depending on the time of year and the stage of molt, but generally it's a good identification feature. Notice on the Carolina Chickadee on the right that the white is limited to the secondary edges, while the greater coverts are similar in color to the rest of the wing and the back.

3. The white edges to the secondaries are more extensive and more obvious on Black-capped than on Carolina. Again, this can be variable according to the time of molt and should always be used in association with the color of the greater coverts (see 2 above).

4. Though subtle, Black-capped Chickadee is relatively longer tailed than Carolina. This can be a difficult feature to use if you only have the one species present but in direct comparison - as here - it is certainly noticeable. Studying your local chickadees a lot will get a 'feel' fixed in your head of what your local birds look like, so that if the other species should show up, you may instantly get a feeling of something a little odd about the bird.

Something I haven't mentioned is call and song. While there are a number of subtle differences in calls between the two species, and the songs are very different, these can be tricky to use because of the hybrid problem and because vocalizations are learned locally. Thus, it does happen that birds imitate each other and, while calls or song can help to back up an identification if plumage details are also recorded, they probably won't help too much with a bird that you hear but don't see too well.

So, are you feeling confident now? No, of course not, nor am I! There's always going to be 'the one that got away' the bird you didn't quite get a good enough look at and that, of course, is life. It will also be the case that a good photo or two will be the best way to convince the records committee that you have a rarity, no matter where you live. Identifying a stray chickadee with confidence is a process that requires careful observation and should never be rushed - but it is doable... So remember to keep the point-and-shoot or the cellphone handy each time you check the feeders!
Posted by Mike Crewe at 3:34 PM