Keeping Snowies in our sights

It's been a very odd winter for weather so far, as we roller-coaster from almost balmy temperatures in the mid-fifties to the dark depths of the so-called 'polar vortex' that has periodically been calving pulses of Arctic weather in our direction. Despite this variation, one constant that continues in the birding news is the presence of Snowy Owls in large numbers in northern and eastern USA. A quick look at reports for January in eBird reveals that the vast majority of birds are focused in a curve along the southern side of the Great Lakes and along the St Lawrence corridor through Montreal and Quebec. A second band of birds shows up in the coastal plain from Maine to Virginia. Outliers still hang on in Newfoundland (though most seem to have moved on from there after the heady days of counts of over 300) while a record-breaking female has become the first ever to be recorded in Florida.

You can keep abreast of some of the exciting stories that are being generated by this phenomenon by checking the Project Snowstorm website at www.projectsnowstorm.org. For those readers living more or less locally to Cape May, you might like to check stories on birds that have been satellite tracked in our area - especially 'Assateague' who I mentioned in an earlier post, and now Philly, who seems set on returning to Philadelphia Airport, having been hauled 40 miles away for his own good!

Around Cape May, Snowy Owls have been a little less obvious of late and at least some of our birds seem to have moved on elsewhere. However, I was pleased to have an opportunity to enjoy one of two seen at Stone Harbor last weekend and, interestingly, to finally get some firsthand proof of what the birds have been eating. We discovered a bird in the seafront dunes and soon realized that it had prey. This was the first time I had seen a Snowy with a meal and close inspection of a few hastily-taken photos revealed that the bird was eating a Black Duck. Studying movements of satellite tracked Snowies on Project Snowstorm reveals that birds have been making regular sorties offshore during the night and it was suggested that such birds may well be hunting ducks that were sleeping on the coastal waters of the bay. The sight of a bird with a Black Duck at Stone Harbor clearly supports this idea.

Snowy Owls are pretty sizable birds but, like most owls, they consist mostly of a thick layer of feathers and these birds are surprisingly small and light when you get them in the hand. Though they are fierce hunters, it is clearly a very risky business for any owl to lift a bird as chunky as a duck clear of the water without putting itself at risk of drowning. These truly are amazing creatures. 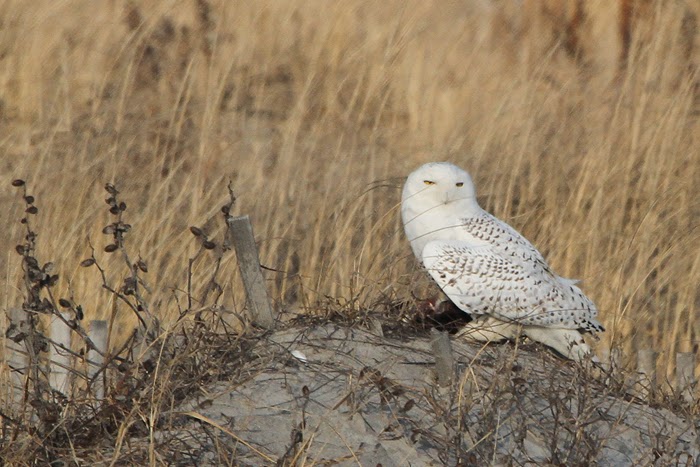 Male Snowy Owl on the seafront near 117th Street in Stone Harbor - note the blackish blob by its feet... [photo by Mike Crewe] 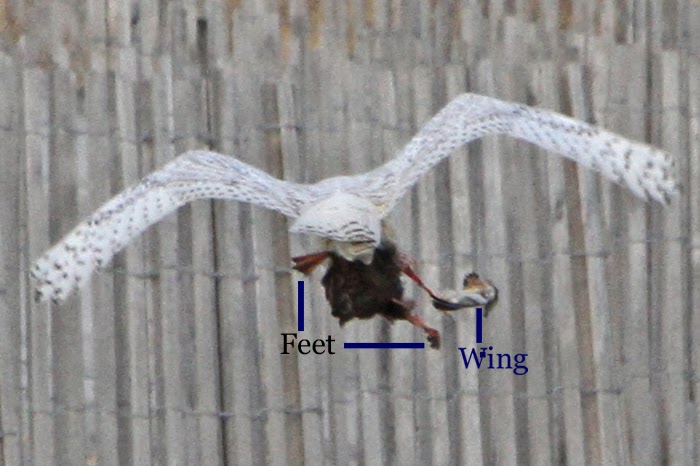 Some heavy cropping in photoshop and zooming in on a distant flight shot reveals that this Snowy Owl has a Black Duck. Note the chocolate brown body feathers, orange feet and the pale underside to the wing, sticking out to the right. Notice that the wing base has already been stripped to the bone; this area of the prey item holds the flight muscles which offers the most food for the owl and is probably most often the part of the bird that is eaten first [photo by Mike Crewe].
Posted by Mike Crewe at 4:04 PM