After a fraught few days in which Stone Harbor Point was scoured with a fine tooth comb, Harvey Tomlinson's awesome discovery of a Smith's Longspur on Sunday morning has been shared with a few more lucky observers. Mike Bisignano was (for some reason best-known to himself given the hideous cold out there!) padding the dunes of Stone Harbor again today and came across the longspur, right in the area that had received so much attention over the past few days. Will Kerling also independently relocated the bird and did sterling work in quickly getting the message out.

What the movements of this bird have been over the past few days will remain a mystery, but today it performed superbly, feeding with a small group of Savannah Sparrows just a little south of the dredge lagoon, in the first section of sand dune. This constitutes only the third record of this species in New Jersey, previous birds having been at the South Cape May Meadows on 19-23 April 1991 and at Island Beach State Park, Ocean County on 18-24 October 1995. Typically, Smith's Longspurs winter in the Mississippi Basin, from eastern Texas, Oklahoma and Kansas to western Louisiana and Arkansas. The population moves north in spring through the central flyway to breed in the high Arctic, from Hudson Bay to eastern Alaska. While identification of adult males in breeding plumage is pretty straightforward, a non-breeding, non-descript bird such as ours falls well into the category of a 'Birder's Bird'. What do I mean by that? Well, simply, that you have to be pretty deeply into birds to get any sort of a buzz out of such an unassuming-looking 'little brown job'! But for many people, that's where the challenge lies and is often what really captivates people - the personal challenge of sorting out just what it is. So let's work through the Stone Harbor Point bird and see what we can come up with. 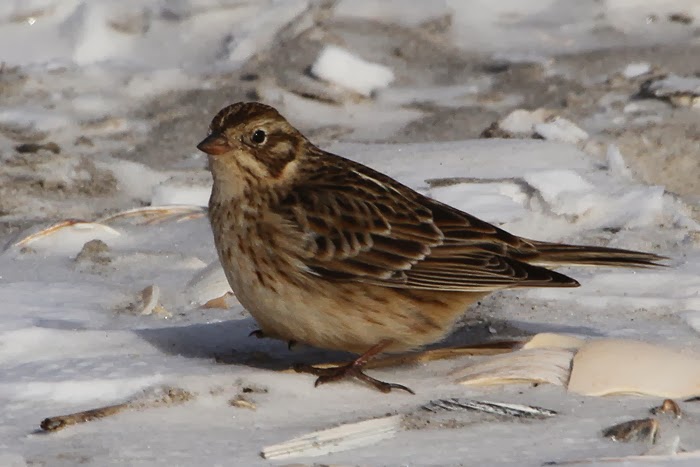 Smith's Longspur at Stone Harbor Point today. Note the short-legged, rather heavy and barrel-shaped look of the bird. Smith's Longspur is narrower-billed and longer-tailed than the other longspurs and a much chunkier looking species [photo by Mike Crewe].

When confronted with a small songbird that is overall brown and streaky, a few groups quickly come to mind - pipits, larks, sparrows and perhaps some of the grosbeaks and finches. To help reduce the choices, behavior is a useful starting point; obviously this is not readily apparent in a photograph, so it's best to take notes at the time - or perhaps use video. This bird had distinctly short legs and used a shuffling, walking gait with its body close to the ground. It also spent the entire time that it was under observation feeding on the ground - it never even climbed a grass stem. The short legs rule out pipits and all of the North American sparrows, while the walking gait rules out the finches - which hop (as do House Sparrows). Spending all of its time on the ground would likely rule out the grosbeaks too, which can further be eliminated by our bird's relatively thin bill. I was certainly struck by the overall lark-like appearance of this bird, but some very subtle differences can be used to eliminate them too - coupled with the fact that all but one species of lark are Old World species (but you shouldn't limit the possibilities too much!). Most species of lark (like pipits) have very long tertials which almost completely cover the primary flight feathers when the bird is at rest and our bird's primaries are readily visible here. Larks also have heavier bills than our bird's, while the only likely species - Horned Lark - has a very different head pattern.

So what are we left with? A quick flick through the field guide should leave you staring thoughtfully at the longspurs and we can confirm this deduction by the behavior and by noting the long hindclaw (the 'longspur'), the pale ear coverts with dark surround and the appearance of two pale 'braces' or 'tramlines' down the back. Without too much effort, we have narrowed a seemingly impossible bird down to a choice of just four species. In reality, we can now name this bird to species based purely on the tail pattern (see below) but let's just complete the process a little more as we are feeling proud of ourselves and want to take it a step further. We can identify this bird as a Smith's Longspur by the amount of white in the tail, which is extensive on the outer two pairs of feathers but absent from the other tail feathers. Lapland Longspur would have less white than this, while McCown's and Chestnut-collared would show a lot more. The even-toned, buffy wash to the entire underparts also supports our identification, as does the realtively fine bill and the fine streaks on the flanks. 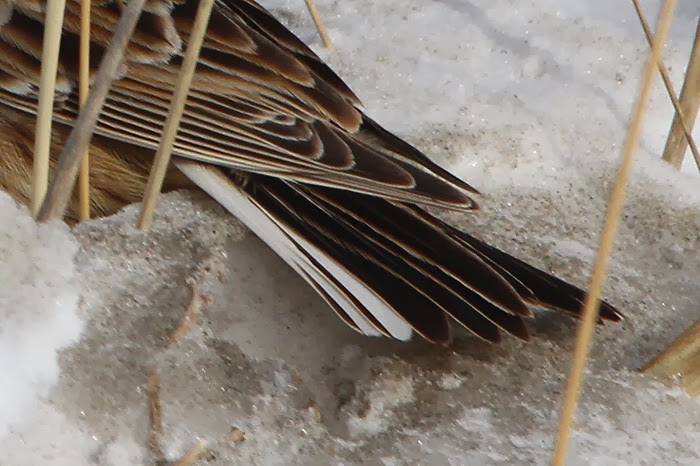 Note the pattern of white with narrow dark streaks in the outer two tail feathers. In this close-up, note also the irregular spacing of the primary tips - a feature shown well in the Sibley Guide and worth comparing with the photo here [photo by Mike Crewe].

So it is a Smith's, what next? Well let's look at telling the age and sex of the bird. This is where we get into difficult territory as such things are so much easier if we are banders and have the bird in the hand, but with the power of modern digital photography, we can do it. In January we know we are not looking at a breeding-plumaged male, so we have to work through the process methodically. With most birds, it is best to age the bird first and we can do this in two ways with the pictures we have here. The shape of the tips of the outer three pairs of tail feathers, and the shape of the tips of the outer greater primary coverts lead us to identify this as an adult bird (i.e. hatched before last summer). If it were a younger bird, these feathers would be subtly narrower and have even more pointed tips. There's no substitute for experience here, but delving into the murky depths of the pages of Peter Pyle's wonderfully complicated Identification Guide to North American Birds (available now from the Northwood Center folks!) will show you some nice illustrations of the differences. With longspurs, it's a little tougher than many other groups of songbirds as the tail feathers are rather narrow at all ages. 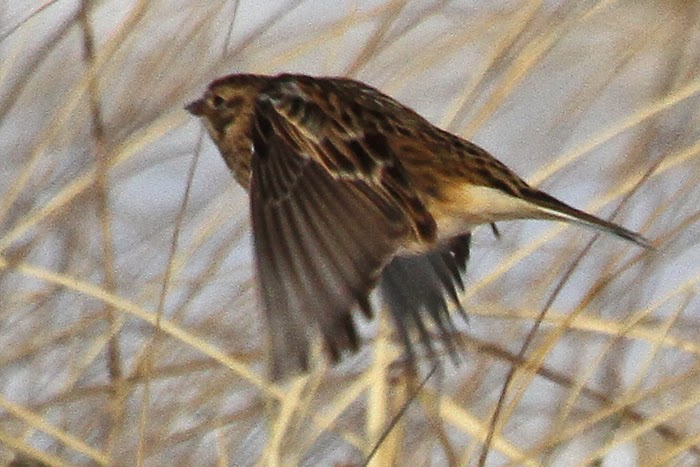 When a bird flies off just as you press the shutter, it leaves you with a blurry image, but there is still often something to be gleaned. Here, it is possible to see the relatively rounded tips to the primary coverts (the feathers that cover the bases of the primary flight feathers) [photo by Mike Crewe].

Now that we know that we have an adult bird we can look at some other subtle features to determine the sex of the bird. Time to look at the Median Coverts - the row of small, pale-tipped feathers that form the upper (= nearest the head when at rest) wing bar. Clearly these are buffy-tipped and contrast with the much whiter tips to the greater coverts. Pyle tells us that this makes it a female, since even first-winter males have whitish tips and edges to these feathers. Though not visible in the photos that I managed to get here, photos by other birders showed quite extensive amounts of white on the lesser wing coverts, further confirming the bird as an adult female.

Time for a pat on the back, a smug look and a trip to the Cape May Brewery! 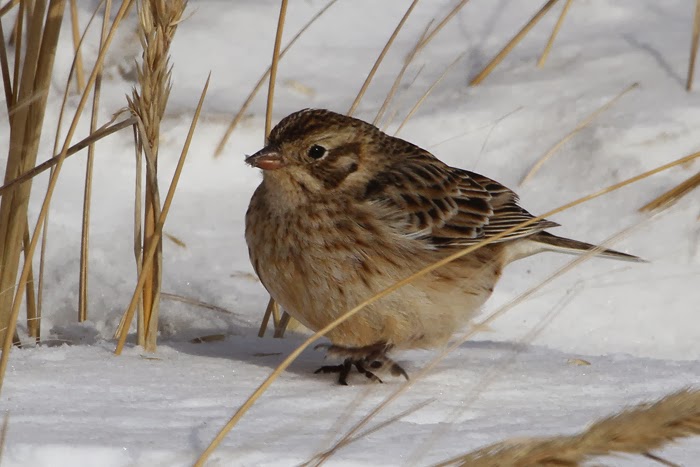 Smith's Longspur at Stone Harbor today - let's hope it hangs on into the weekend [photo by Mike Crewe].
Posted by Mike Crewe at 8:42 PM