A very common game amongst the keener birders - OK, let's say the high-end competitive element (!) - is having a little competition, a guessing game as to what the next good bird will be that shows up in the area. Often this comes in the form of a good bird for the year, a completely new bird for the area or even, something that forthcoming weather conditions might bring. Under the latter heading, Tom Reed started a guessing game going with my wife and me in the run up to the severe winter conditions that hit us on January 7th. Tom set the bar high with a suggestion of Purple Gallinule.... Hmmmm, what was he talking about? Surely with an onslaught of sub-freezing temperatures coming, a snazzy bird from the near-tropics was not the way to go - I want for Thick-billed Murre and my wife went for Ivory Gull.

So, roll forward to January 9th and I am sitting in a meeting at our Center for Research and Education with the invasive plants group. Midway through the proceedings there is suddenly a face at the window - a man in camouflaged clothing is peering in the window at us! Luckily, some of the group instantly recognized him as Hans Toft, a local environmental educator; Hans had brought us a dead bird - yes, I work in the sort of job where people do that! Hans produced from his pocket what I thought was going to be a Clapper Rail; overall brownish, paler below, and with long, dangly legs and big feet. But then I saw the short beak... Hans knows his stuff, he knew what it was - and so did I as soon as I saw the wonderful aquamarine colors on the wings. It was a Purple Gallinule! Hmmm, that Tom Reed!!

The wanderings of certain species of rails and crakes is something of a mystery. This is a group of birds with relatively short, rounded wings, not designed for long distance flying. Most species have short, soft tail feathers which have little effect as directional rudders, while the long legs and cumbersome large feet must create a lot of drag in flight. In addition, most species live in dense stands of marginal aquatic vegetation and generally seem reluctant to leave it. And yet a number of species regularly turn up way outside of their normal breeding range. In the Old World, the sub-Saharan, African Striped Crake has been found in Europe and the Canary Islands, while in the New World, the Purple Gallinule has an established track record of seemingly heading north for no obvious reason that we can see - indeed, the species has even reached Europe in the past.

In this instance, Tom's look at past records in northern North America, coupled with the impending weather pattern looked good for Purple Gallinule to show up in Cape May. There are a number of previous records of this species for north-eastern North America in mid-winter so there is an established pattern of vagrancy at this time of year. Quite why individuals move north during a seemingly unsuitable time of year is still something of a mystery, but it may be more likely that they head north - perhaps up the Mississippi flyway - earlier, maybe in the fall, and remain undiscovered in well-vegetated wetlands somewhere around the great lakes area. Once there, a big drop in temperature would get them moving again and a severe westerly air flow like the one we just had would bring them across to the east coast.

Sadly for both us and the bird, it was picked up already dead, beside Route 9 in Clermont. Such birds that are brought to us in good condition are forwarded to the Acadamy of Natural Sciences in Philadelphia where they may become part of the permanent collection of scientific study skins, or may be used for training new scientific staff. 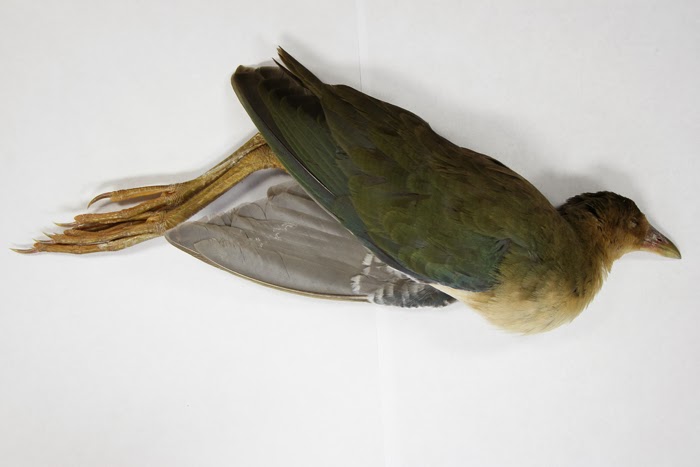 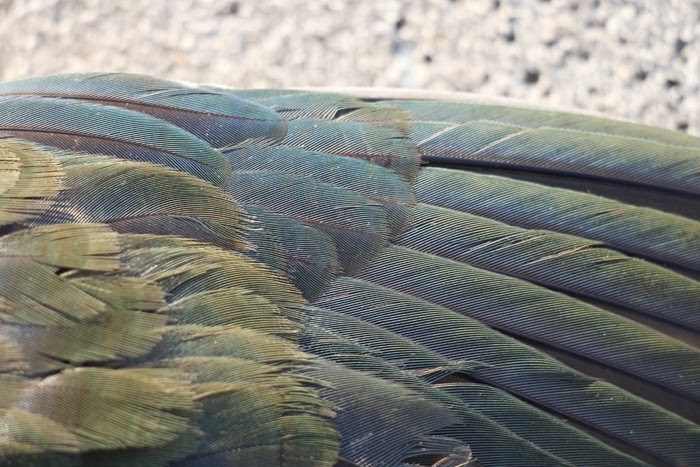 Close-up of the wing, showing the green and blue tones to the flight feathers [photo by Mike Crewe].
Posted by Mike Crewe at 9:24 AM