Spiffiness, part III: Achieving it and taking it north

Clay Sutton, Glen Davis, and I conducted bird surveys off Atlantic City today, and as Mike mentioned (below), we had a reasonable amount of northbound waterbird migration, primarily Surf Scoters and Northern Gannets, with all of the latter being adults looking quite spiffy in their yellow, white, and black. Also northbound and clothed in spiffiness were the below three Great Cormorants just off Ventnor. 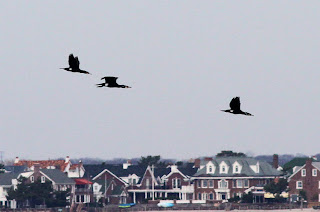 Still in the process of what Glen might call spiffifying or, when he's really going, spiffificationizing, were various adult Common Loons... 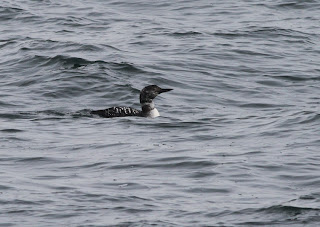 and Long-tailed Ducks (behind the American Black Ducks). 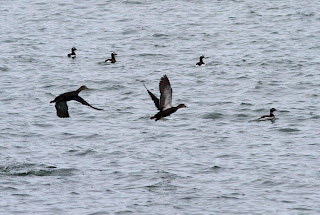 It is getting quite easy to determine relative age on Common Loons now, as the older birds are all molting into alternate plumage, while the not-quite-one-year-olds are still in juvenal plumage, with no suggestion of getting spiffy, as in the bird below. 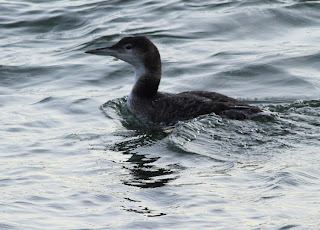 Note that on this bird, one can see the pale fringes to all of the upperparts feathers, the single best indication of juvenal plumage. We did see a few adults in apparently full alternate plumage; I would suspect that those will be leaving shortly, as was the alternate-plumaged Common Loon that Clay and I saw at more than 200 feet above sea level heading north.
Posted by Tony Leukering at 7:59 PM