Belleplain State Forest continues to be one of my favorite places to take people for some 'let's see what happens' style wildlife-watching. Our latest walk started, as usual, at the mothing wall, where we found at least six of those raspberry-and-banana delights, the Rosy Maple Moth, a single Southern Flannel (going for the latest ever in New Jersey award!) plus - as usual since this is our first full year recording them - a few new surprises. After the moths and other insects at the lights, we headed into the woods and wetlands of Belleplain, starting first with some close encounters with Slaty Skimmers, going through their bizarre mating ritual which was described, then happened right before our eyes! Carnivorous Spoon-leaved Sundews were flowering and the ancient art of frog catching (a disappearing art sadly!!) was put to good use to identify some decidedly unspotty Southern Leopard Frogs. We rounded off with a study of the local huckleberries and blueberries - which involved some skilled tasting tests! - and finshed with a dazzling Ebony Jewelwing. Here's some of our finds: 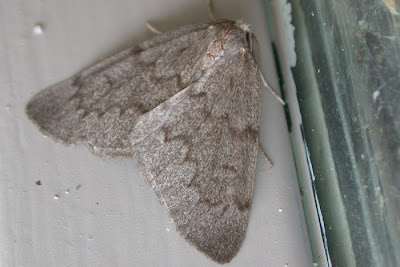 I struggled with this moth at the time as it isn't in the new moth guide to our area. However, an internet search eventually led me to Nepytia pellucidaria, a species which is poorly known but which is perhaps the most likely member of its genus to occur in our area. At least five were at the light today [photo by Mike Crewe]. 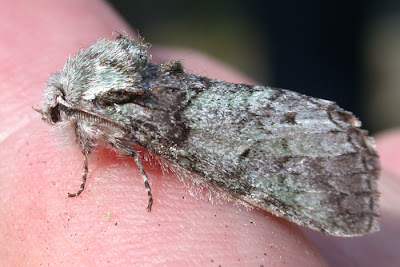 Moth species that disguise themselves from predators during the day by looking like pieces of lichen and blending in with their surroundings are very common in woodland areas. This Mottled Prominent was one of two seen at Belleplain today and behaved very obligingly for the cameras [photo by Mike Crewe]. 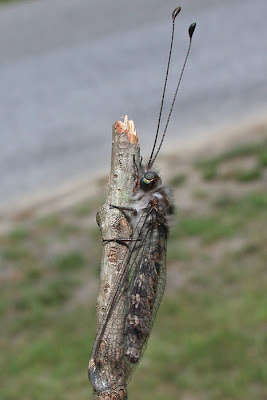 Our best find of the day, simply because it is so crazy! This strange beast, looking somewhat like a dragonfly with silly antennae is known as a Four-spotted Owlfly (Ululodes quadripunctatus). I guess they are called owlflies because they have very hairy heads and thoraxes. They are actually quite closely related to Ant-lions - those insects that build those little pits in the ground when they are young, to capture ants. Owlfly nymphs are very similar to Ant-lion nymphs, but they roam freely through the leaf litter and don't build pits [photo by Mike Crewe]. 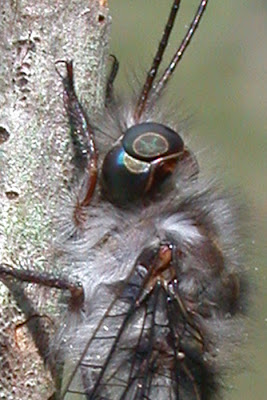 A real close-up reveals one of the most peculiar features of owlflies - their split compound eyes! This individual looks as though it has its head turned to show the top, where the two eyes meet, but in fact this is just one compound eye and it has that curved split across the middle; I can't begin to imagine what sort of a view of the world this gives the creature...[photo by Mike Crewe].

Recent Bird Sightings
At least three American Avocets recently turned up at Brigantine but I have heard of no further sightings of the Ruff reported from there a few days ago. The Dickcissel continues at Brigantine and a steady trickle of early migrant shorebirds and Glossy Ibises continues though our area. At Cape May Point, Saturday's CMBO walks turned up the first Pied-billed Grebe and juvenile Little Blue Heron of the fall, while Don Friday had a surprise visitor to his yard in the form of a Pine Siskin - keep an eye out for those strange goings on in your back yard - one of my regular correspondences has two young Green Herons regularly visiting his birdbath in hot weather in Lower Cape May at the moment!
Posted by Mike Crewe at 7:53 PM