I guess most people think of September when they think of warbler movements through Cape May. And those people would be correct of course. But it may come as a surprise to most to hear that warbler movements have already started at Cape May Point. Scott Whittle texted last Saturday that Yellow Warblers were calling over the point and this was certainly the case on our state park walk this morning too. Both Yellow Warblers and Bobolinks have been moving in small numbers these past few days, but the arrival of these colorful waifs was even more apparent last thing this afternoon when two Yellow Warblers, a Prairie Warbler and an American Redstart were bobbing around the birdbaths at the Northwood Center - all new arrivals during the course of the day.

Cape May Point State Park was certainly producing some great birding this morning, especially around Bunker Pond. Solitary, Stilt, six Pectoral and assorted Semipalmated and Least Sandpipers, Semipalmated Plover, two Willets, 12 Killdeers and plenty of Short-billed Dowitchers and Lesser Yellowlegs, all there to be studied at close range. Great Egrets and Great Blue Herons are increasing in number and Glossy Ibises and Black-crowned Night Herons were seen this morning too. Eight Royal Terns and a Lesser Black-backed Gull on the beach all added to the variety - the birds are here! 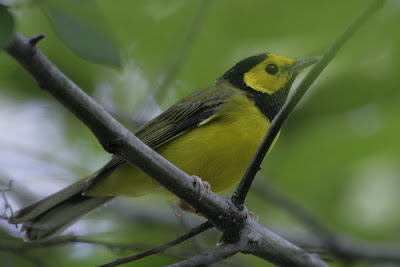 Signs of warbler movements can even be apparent up in Belleplain State Forest. This male Hooded Warbler fed close to me for several minutes and, though this species breeds in Belleplain, this bird was in an area that I know well and have not seen this species in before. Nearby, I also ran across a feeding party of several Pine Warblers, Black-and-white Warbler and an American Redstart [photo by Mike Crewe].
Posted by Mike Crewe at 9:10 PM