Shorebirds & seabirds continue in the news

Southbound shorebirds and wandering seabirds continue to be in the news on the various information lines at the moment. I heard from Clay Sutton that Heislerville is really busy with shorebirds right now, with his latest counts including 3,000+ Semipalmated Sandpipers, 1,600+ Short-billed Dowitchers and 502 Lesser Yellowlegs - the latter count easily surpasses Clay's old fall record of 200! Eastern Willets seem already to have mostly shipped out from the backbays and tern numbers are gradually building down at Cape May Point, among them a Sandwich Tern and two Roseate Terns today, while Lesser Black-backed Gull numbers have so far peaked at 11 on South Cape May Beach. Two Wilson's Storm-petrels were feeding in the bay this morning and a Great Shearwater - presumably the same bird - was reported by Tom Reed, this time seen sitting just offshore from the state park.

A run through our Field Trip Reports should give you a good insight into the shorebirds and other waterbirds that are steadily increasing around wetlands at the point; perhaps most surprising is the appearance of a second American Coot. Solitary Sandpiper and Little Blue Heron are sure signs of fall advancing, as are the little groups of Sanderling that are starting to show up on the tideline now. 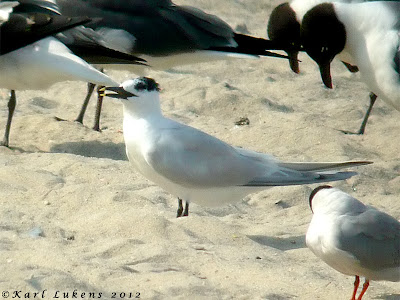 Sandwich Tern at Cape May Point this week [photo by Karl Lukens].

Songbird migration is not hugely in evidence as yet, but small numbers of Bobolinks are certainly making their presence known overhead during several of our recent weekly walks and Karen Johnson tells me that numbers of Ruby-throated Hummingbirds are starting to build up at her feeders up in the north end of the county.
Posted by Mike Crewe at 1:24 PM