It was one of those Cape May days today where you just needed to be in the right place at the right time. Luckily, the business meeting I had today was in the afternoon, so I was on hand at the Northwood Center to be able to respond quickly to a report of a Wilson's Phalarope at Bunker Pond in Cape May Point State Park. At first the bird proved elusive but eventually I found it, fast asleep in the edge of the vegetation on the south side of the pond. Shortly it started feeding and put on a great show for Karl Lukens and I. The bird continued to show on and off until the evening so will hopefully still be present on Friday. Late afternoon watchers also got lucky with a juvenile Gull-billed Tern on Bunker Pond, among the masses of other terns there - I also saw my first juvenile Laughing Gull of the year in the state park. 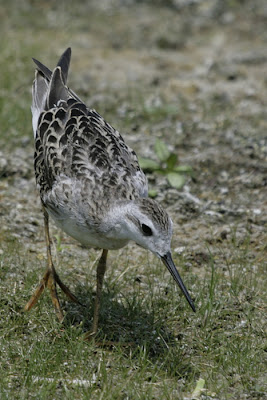 The heat haze today played havoc with the focus and blunted any attempts at real sharp pictures, but the Wilson's Phalarope put on a fair performance for me today. Unlike the other two phalarope species, Wilson's has only slightly lobed toes and spends much more time feeding on land than spinning round in circles on the water. This bird carefully stalked a multitude of tiny flies along the bare edges of the pond [photo by Mke Crewe]. 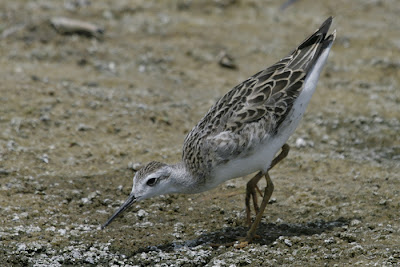 Juvenile Wilson's Phalarope at Bunker Pond today, first reported at 10AM this morning by Chris Takacs. Note the overall very slender appearance, thin, stilt-like bill and olive-yellow legs. This is a rather scarce bird at Cape May Point, so well worth the visit if you want to treat yourself! [Photo by Mike Crewe].

So that's the phalarope - what's the phalaena? Well, Phalaena was an old word that Linnaeus used for all moths when he was classifying insects and I thought I should bring belated attention to the fact that the USA is running its first ever National Moth Week this very week. Wherever you are, chances are there's an event taking place near you to celebrate the amazing abundance and variety of our moths, much maligned and much misunderstood creatures. If you haven't already done so, check out the National Moth Week website for events near you and go and see what all the fuss is about! 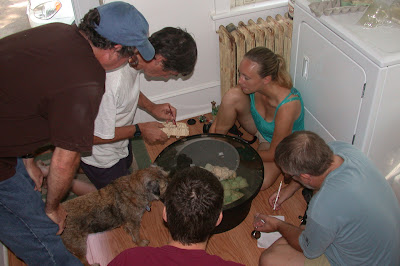 It's been a while since Monkey featured on the CMBO blog, but here he is in the thick of it as we work our way through the trap at our first CMBO National Moth Week event, which took place at my house earlier this week [Photo by Megan Crewe]. 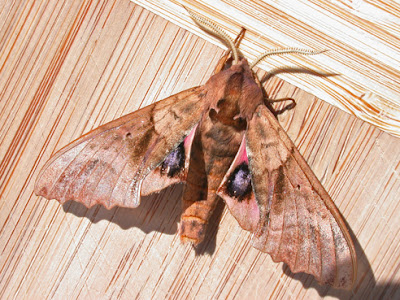 This dead-leaf mimicking Blind-eyed Sphinx was one of 99 species of moth that we identified and photographed before releasing at our National Moth Week session. In all we totalled 1004 individual moths identified and logged - plus a slew of teeny weenies that just got the better of us! [Photo by Mike Crewe] 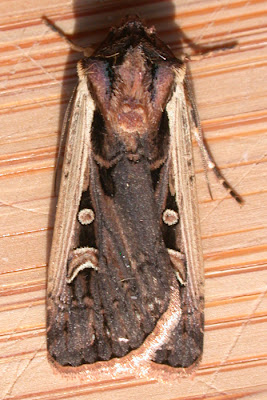 One moth of particular interest is this Western Bean Cutworm that was in my moth trap here in Cape May on July 6th and which constitutes the first record for New Jersey as far as we are aware. I noticed that the Cape May County Herald reported one caught at Hammonton in Atlantic County on July 16th, so this species - which is considered a pest species of crops in some areas - seems to be continuing its push to colonize the whole of North America, aided and abetted by crop planting schemes [photo by Mike Crewe].
Posted by Mike Crewe at 10:22 PM