Wednesdays are really becoming a favorite with me! Our regular weekly walk at the state park is turning up some very nice birds at the moment, with low water levels and plenty of mud on Bunker Pond proving a real attraction to birds. This morning, one of the most exciting sights was a flock of five juvenile Tricolored Herons that dropped into the pond in a tight little bunch. Seeing one of these south of the Cape May Canal is a far from common sight, so five together was a real treat. Another highlight this morning was a Marbled Godwit that whizzed right over our heads and out across the bay, while a juvenile Gull-billed Tern that has been around for a few days now gave us a great display of its insect-catching feeding behavior. Two Pectoral Sandpipers, four Stilt Sandpipers and all the usual little peeps, dowitchers and yellowlegs were present and a bewildering array of tern plumages gave us a chance to think ahead to our tern workshop this coming Saturday (still just about time to book the last few places if you are quick!).

Signs of songbird migration crop up from time to time, though it's still early for most species to be moving yet. An adult female American Redstart paid a brief visit to the Northwood Center feeders yesterday and Yellow Warblers and Blue-gray Gnatcatchers are poking around the bushes at the point. Early signs of the annual build-up of Eastern Kingbirds are in evidence now and swallows are certainly massing at a variety of spots now. Talking of which, don't forget the awesome spectacle of Purple Martins that happens in Cumberland County every August. This year there will be naturalists on hand to explain the spectacle to you on August 10th and 11th, plus a fabulous boat trip you can book in on that will get you close to the action (and with our very own Pete Dunne on board!) - call us for more details or to book on the boat trip.

Further afield, Brigantine has its usual early fall build up of great birds, which recently has included two Black-bellied Whistling-ducks, an American White Pelican and an American Moorhen. Much more is doubtless there, awaiting your discovery! 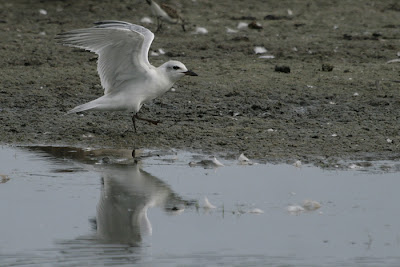 This juvenile Gull-billed Tern has been on Bunker Pond for a few days now, allowing plenty of opportunity to study the strangely gull-like shape and behavior of this species [photo by Mike Crewe]. 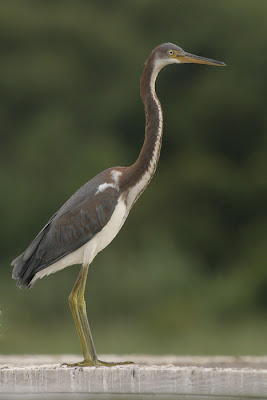 One of five Tricolored Herons that arrived on Bunker Pond this morning, this individual was a new species for my 'seen on the railing at Bunker Pond' list! Juvenile Tricoloreds differ from adults in having more rufous on the neck and wing coverts [photo by Mike Crewe]. 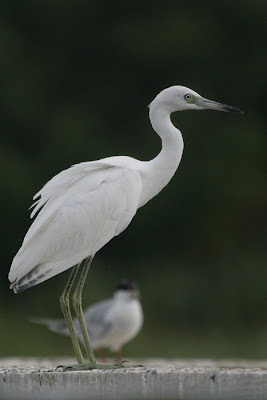 Our Tricolored Heron didn't last long on the railing as this juvenile Little Blue Heron took exception to it being there for some reason. However, a close view of this bird allowed us to see a good identification feature that is not always easy to see in the field. Notice the smudgy dark wing tips on this bird - a feature commonly found in Little Blue Heron but not in the other white egrets found in our area [photo by Mike Crewe]. 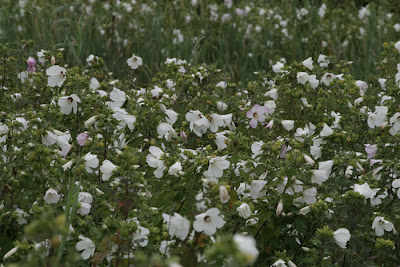 Despite all the great bird activity, I reckon the greatest natural spectacle at Cape May Point State Park right now is the incredible mass of blooming Swamp Rose Mallow. This species really seems to have benefited from the removal of all the invasive Common Reed at the point and is an amazing sight right now [photo by Mike Crewe]. 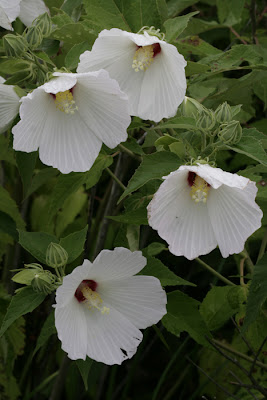 Close-up of Swamp Rose Mallow flowers. Plants may have pink or white flowers, with or without a red center and often show intermediate characters. The various forms were once vaguely considered to be separate species, but are all lumped under one, very variable species now [photo by Mike Crewe].
Posted by Mike Crewe at 10:59 PM