Off the starting blocks

Fall is officially off the starting blocks so if you weren't at Cape May this morning you missed it! But there will of course be many great days to come so there will be plenty of opportunity for you to come down and be part of the fun. But that first big day, that first feeling that Fall really is now upon us is always special. The weather forecasters were right and Tom Reed alluded to it in a recent blog post and those that were up on Higbee Dike this morning certainly got their money's worth. Best of all was the record count of 374 Red-breasted Nuthatches, with reports of the same species coming from all around Cape Island - even at the Coastguard Unit! Two Lark Sparrows, two Buff-breasted Sandpipers and an Olive-sided Flycatcher were nice additional birds at the dike too. Cameron Rutt will post the full list from the dike in due course on our Seasonal Research page.

On my regular Wednesday morning walk today there was much movement in evidence too; warblers and Bobolinks could be heard overhead, small parties of Purple Martins came back in off the bay and a steady run of Red-winged Blackbirds and Brown-headed Cowbirds was in evidence. All the heavy rain we experienced over the weekend had put paid to shorebirds on Bunker Pond, for the next few days at least, but Black Terns continue to enjoy the beach and there was the added bonus of visible bat migration! Yes, bats were on the move and we saw three Red Bats zooming along the dune line in broad daylight, one of which we were able to scope as it hung itself up in a bayberry bush to rest. Hawks too were on the move - at least three American Kestrels, Merlin, Cooper's Hawk, Bald Eagle, several Ospreys and four Northern Harriers were logged this morning, with the highlight being the fine sight of two adult male Northern Harriers flapping south, high over the Delaware Bay.

I don't have any pictures from this morning to share, but here's a couple of images I was sent of recent highlights at Brigantine: 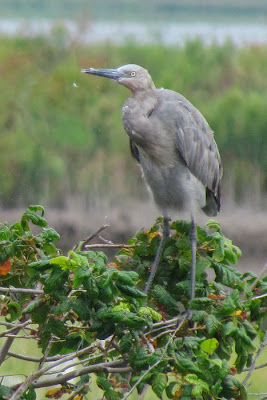 Brigantine and New Jersey's Reddish Egret certainly played hardball with the region's birders; staying until last Friday, it failed to show for the weekend crowds, then re-materialized back at its favorite spot on Monday! Guess I'll have to wait for the next one... [photo by Lisa Ryan]. 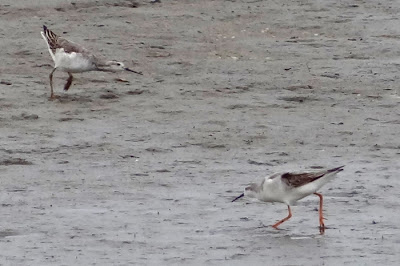 These two Wilson's Phalaropes put on a good show for admirers at Brigantine. Unlike other phalarope species, Wilson's Phalaropes will spent much time feeding on dry land, usually adopting a manic chasing style as they pursue small insects [photo by Marvin Hyett].
Posted by Mike Crewe at 4:41 PM