Townsend's Warbler at Brig and a good morning flight

The big news is that Don Freiday reports that a Townsend's Warbler was found among a foraging warbler flock this morning along Lily Lake Road in the Brigantine Unit of Forsythe N. W. R. The bird was east of the Noyes Museum. This area is NOT reached via the main entrance, but from the next road south from the light at East Great Creek Road along Hwy 9.

A quick addendum for yesterday's post: I neglected to note that Josh Nemeth and I saw what was certainly one of the first actively migrating raptors of the fall, a male Northern Harrier way up and well south of the West Cape May impoundments (where we were standing) heading southwest and probably already looking at Cape Henlopen.

The passerine migration flight that many of us had hoped for yesterday took place last night and this morning. Tom Reed, Scott Whittle, and others were stationed on the dike at Higbees Beach W. M. A. and were rewarded with a good early-season morning flight, consisting of some 400 birds. Species reported from the fields at Higbees included 1 Golden-winged and 2 Blue-winged warblers, 3 Mourning Warblers, and single Blackburnian and Wilson's warblers, a Willow Flycatcher, and a Red-breasted Nuthatch. I note that eastern Colorado has been seeing a good, early push of this last species, so it might be a good year for Red-breasteds in the Lower 48 this fall/winter.

I stayed home this morning and counted birds from my roof in Villas, where I had only 9 warblers (2 American Redstarts, 1 Yellow Warbler, and 6 unidentifieds). However, I counted a reasonable variety of northbound birds in two hours, including about 25 Mourning Doves, 2 Red-bellied Woodpeckers, 14 Eastern Kingbirds, 2 Northern Mockingbirds, 79 House Finches, and a whopping 669 Purple Martins. Yes, the northbound fall morning-flight phenomenon that is so visible at the dike at Higbees takes place quite a way up the Bayshore; it takes place over quite a few Cape May birders' houses at least as far north as Reed's Beach. 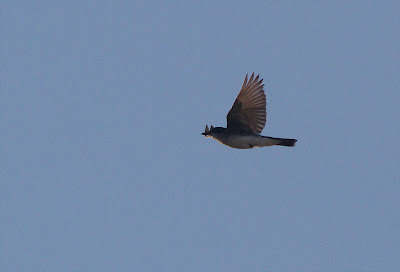 [One of 14 Eastern Kingbirds northbound past Miami Beach, Villas, this morning. Click on image(s) to see larger version(s). All photos copyright 2012 by Tony Leukering.] 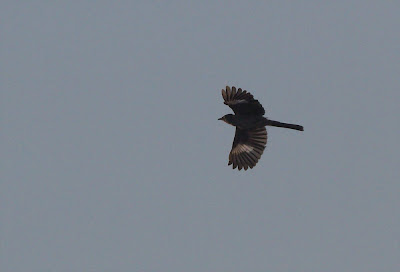 [One of two Northern Mockingbirds northbound past Miami Beach, Villas, this morning.] 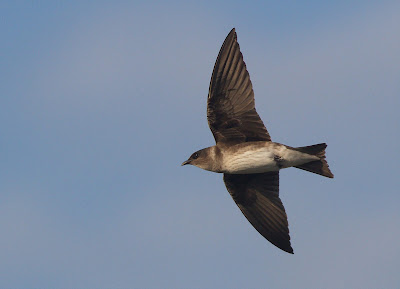 [Of the 669 Purple Martins northbound past Miami Beach, Villas, in two hours this morning, many were juveniles like this bird. Notice that all of the flight feathers are fresh, unworn. Unlike juveniles, adults have initiated flight-feather molt and those remiges that have not been replaced are worn.] 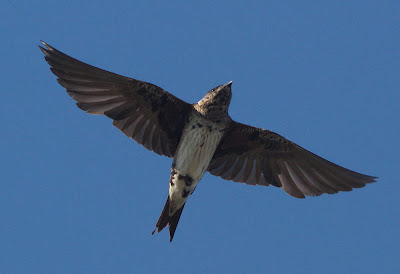 [Compare the wings on the bird in this picture with those of the one in the picture above. This second-year male (hatched in 2011) is growing some inner primaries and the older primaries are nicked and worn. Note that the innermost of the older primaries on both wings seem to project just a little bit farther than the adjacent older primaries. That probably indicates that the new feathers growing from those follicles are just about to completely push the old feathers out of the wing. The presence of scattered dark feathers enable us to identify this as a male, though with much less purple feathering than most second-year males sport, such as the bird in the last picture of this post. The fact that it is molting wing feathers allows us to know that the bird is not one of this year's progeny.] 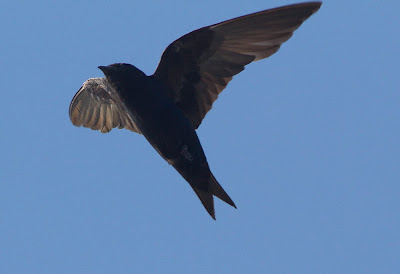 [This adult male has grown in the two innermost primaries and has dropped the next two (they have ten primaries per wing and only eight are visible).] 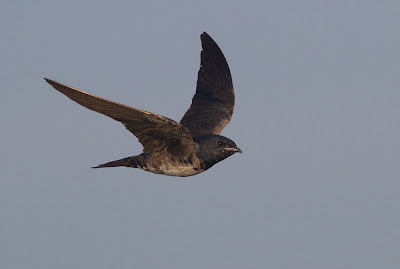