On standby for warblers

Weather conditions look very promising for tomorrow (Friday) morning, with north-west winds forecast overnight. Though there isn't an associated cold front (it is only August after all!), such weather should be favorable to us and could result in a nice flight of warblers at Higbee Beach tomorrow morning. This is good news for our Morning Flight project at Higbee Dike since tomorrow is the first day that a counter will be up there for the 2012 season.

As Tony has posted recently, warblers are clearly on the move now and this was certainly highlighted for me last thing this afternoon. Those that know me (and probably some that don't!) will know that I have a pretty privileged window at the Northwood Center which gives me some great birding opportunities from time to time while I'm mulling over the finer points of program scheduling. Today I became aware of a rather thick 'tick' call outside the window, very different to the Yellow Warblers that I have been regularly hearing of late. Trying a little bit of birders' magical pishing, almost immediately an Ovenbird popped up and was craning its neck to discover the source of the sound. Time to be prepared and, for once, I had my trusty camera ready on the work desk. While snapping away at the Ovenbird, I became aware of another bird lurking in the back of the holly that just wouldn't quite show itself. Luckily the phone didn't ring, nobody came in through the door and gradually my top prize of the week popped out right in front of me - a Mourning Warbler! Never an easy bird to see at Cape May in the fall, this was a new bird for my office window list and very welcome it was too! Just remember, it pays to be prepared!

So, time to be starting your birding days at Higbee Beach, but don't forget those other birding venues too. This morning, Great Blue Herons were heading out across the bay, I saw Green Herons flying over Bayshore Road, on the tern railing at Bunker Pond (with a Belted Kingfisher!) and on the island at Lake Lily today and it was nice to see a mass of juvenile Laughing Gulls for the first time at the point - all feeding around the concrete ship in a noisy mob and very different to the usual rather quiet feeding of adult birds there. Best of all this morning though was a count of eight Black Terns at the concrete ship. 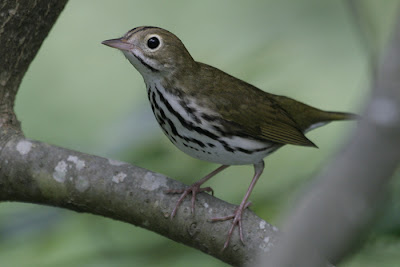 When Ovenbirds get inquisitive, you really do get a chance to get a good look at them - but being quiet is the secret... [photo by Mike Crewe]. 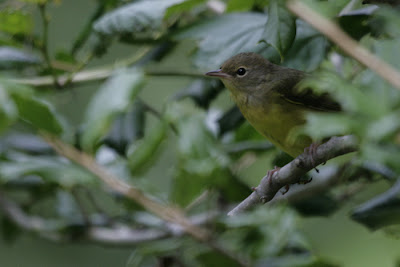 My star bird of the day. A juvenile Mourning Warbler pokes quietly out of the holly leaves right outside my office window [photo by Mike Crewe].
Posted by Mike Crewe at 6:36 PM