Just a bit too late

The "cold" front that, a few days ago, was forecast to have cleared through our area before Saturday night took a bit more time than we had hoped, negating our hopes for northwest wind overnight last night. Had we gotten those winds, we probably would have woken this morning to the first good landbird flight of the fall, with reasonable hopes for some 10+ migrant warbler species and a goodly variety of other southbound migrants. Instead, Josh Nemeth and I had exactly four passerines in morning flight, one each of American Redstart, Indigo Bunting, Dickcissel, and Bobolink.  The Dickcissel flew by us, giving its raspberry call that is so distinctive, as we were standing in the Cape May Point S. P. parking lot talking with Scott Whittle. Amazingly, Sam Galick, who was somewhere in the bowels of the Park at the time, took the below picture of the bird when it was being harassed by a passing Ruby-throated Hummingbird! So, that would be Dickcissel number one for the fall. Of course, after I returned home to get some work done, Tom Reed texted me telling me that the wind had shifted NW at the State Park by 11 am. Just a bit too late. 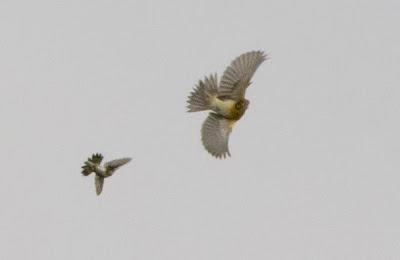 [Click on image to see a larger version. Photo copyright 2012 by Sam Galick.]

Yesterday's series of showers and intense thunderstorms produced a lot of local rain, raising the level in Bunker Pond (at the State Park) more than enough to eliminate the island and most of the open mud that had been frequented by a goodly variety of shorebirds in recent weeks. There were still Pectoral and Stilt sandpipers present this morning, though. The most interesting shorebirds, in my mind, were the three fluffball Killdeer at the southwest corner of Bunker Pond -- quite late for such youngsters! The juvenile Gull-billed Tern that had been hanging out on the island apparently moved to the beach at Cape May Point, where Scott Whittle found it this morning. The adult and juvenile Sandwich Terns that have been around for a while were with Royals and Commons on the State Park beach. In fact, the beaches and the rips off Cape May Point were spectacular this morning, with at least 240 Least Terns between the State Park and St. Pete's, inclusive, with perhaps half or so on the beach, the other half out foraging, most over the rips. There were four Black Terns (two adults, two juveniles) off of St. Pete's.

Late yesterday afternoon, after the urging by Tom Reed, I checked out the Cape May airport to see if any shorebirds had been grounded as a result of the fairly strong thunderstorm that drove through the area after 4 pm. Unfortunately, all I found was three adult Black-bellied Plovers and 11 Killdeer for my efforts, though the 141 Barn Swallows foraging and standing around on the runways was an interesting sight.

The last bit of info for the day:  Tom Reed found and photographed the below Buff-breasted Sandpiper at North Brigantine Natural Area in Atlantic Co. on 9 August, the first of the fall in south Jersey. 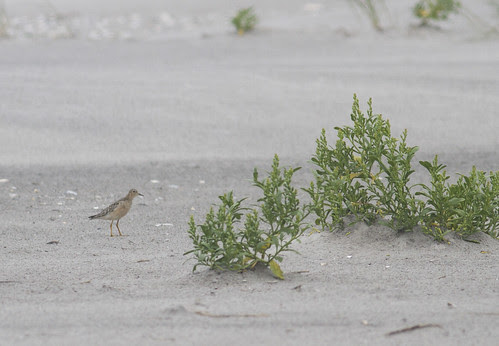 Posted by Tony Leukering at 2:55 PM