Stone Harbor Point has always been among the most popular of Cape May County's summertime birding hotspots. Thousands of southbound shorebirds utilize the site (particularly at high tide), threatened beachnesting birds attempt to breed here, and it's just a superb spot to view all sorts of bird and bug migration throughout the fall season. My visit to the Point this morning was focused on surveying Piping Plovers for the state's Endangered & Nongame Species Program, of which there were a decent number, along with various other goodies. 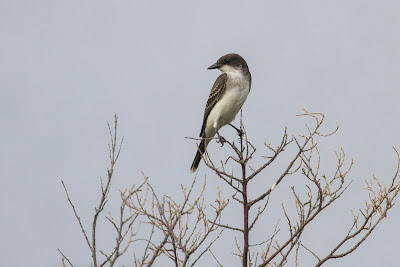 [Autumn passerine migration along the barrier islands can be extremely interesting, and I was pleased to find a little influx of at least a dozen Eastern Kingbirds along the path out to the beach this morning. I hadn't seen any kingbirds at Stone Harbor Point during the previous three days.] 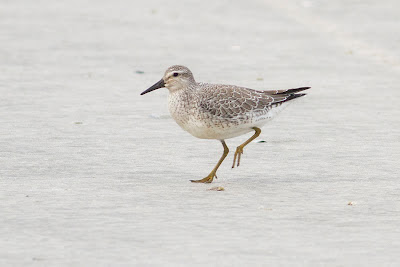 [This juvenile Red Knot was feeding by itself along the outer beach. Over 500 Red Knots have occasionally been roosting on or near Stone Harbor Point at high tide during the past few weeks, but this is the first juvenile (bird born this year) that I've come across.] 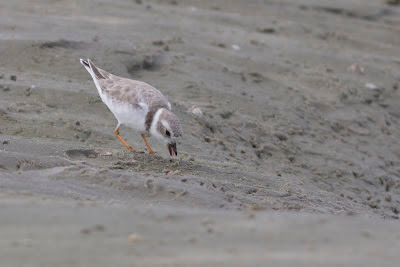 [Stone Harbor Point also serves as an important nesting and stopover area for Piping Plovers. This individual was actively feeding toward the southern tip, and was one of 16 that I tallied during my survey. A banding project was conducted here this summer, and birders are encouraged to look for color-marked individuals.] 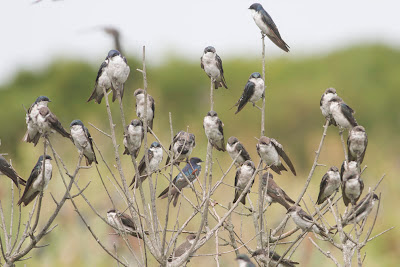 [On my way back to the parking lot, a large swarm of Tree Swallows descended over the base of the Point-- a true sign of the coming season.]

Not pictured here are the 18 Brown Pelicans, 15 Caspian Terns and two Lesser Black-backed Gulls which also made their way onto my list. Even though the walk is long (the Point is growing in size, and it's now a little over a mile to get to the southern tip), and a large part of the habitat is closed to ensure space for nesting/roosting shorebirds, a trip to Stone Harbor is still a no-brainer in August.

Plan a visit soon and let us know what you find!
Posted by Tom Reed at 10:35 PM