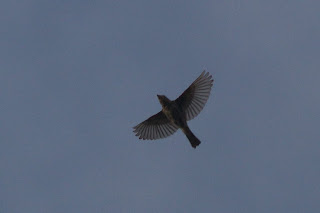 A couple hours spent standing at the handicap platform in the first field at Higbees Beach WMA this morning proved enjoyable, and not just for the company that I kept (which was made up of Bill Boyle, Shawneen Finnegan, and Paul Lehman). With the short-term W to WNW winds overnight, there was a nice little morning flight. The warbler tally (all birds in morning flight, except for the Worm-eating that Bill hogged in the veg to the west of the platform) comprised 3 Northern Waterthrushes, 6 unidentified waterthrushes, 1 Black-and-white Warbler, 10 Yellow Warblers, 8 American Redstarts, and 3 unidentified warblers. We also talled a few flocks of Blue-gray Gnatcatchers on the move, with our total of 17. Aside from all the Red-winged Blackbirds and the 38 (or so) Bobolinks on the move, the most obvious species taking part in morning flight was House Finch.

Though most birders do not consider the species to be all that migratory, there are numerous fairly long-distance banding recoveries in the East and anyone that spends any time at all on the dike at Higbees knows the truth. House Finches move through Cape May in large numbers, starting in late July (at least!) and continuing deep into the fall. Where they're coming from and where they're going is unknown, but I counted 37 going over my head this morning, in parties of 2 to 8, most southbound. Though I have tried fairly frequently to get good pictures of House Finch in flight, my efforts have not produced; this morning's came closer than usual, and the picture up top here is the best of the lot (unfortunately, not quite in focus). But, I still have months to work on it this fall.

Continuing to Cape May Point SP, the four of us were able to quickly find the continuing juvenile Gull-billed Tern on Bunker Pond, a bird that keeps begging from other terns, but which has not been attended by adult Gull-billeds during its entire 12-or-so-day stay. On the lovely muddy margins of the pond was a good variety of shorebirds, including a smattering of Pectoral Sandpipers, a few Stilt Sandpipers, and a single White-rumped Sandpiper. An adult Black Tern, nearly molted out of alternate plumage, came in to join the fairly small numbers of Common and Forster's terns and a juvenile Yellow-crowned Night-Heron made a brief, fly-by appearance.. On the beach were an adult-like Lesser Black-backed Gull and single adult and juvenile Sandwich Terns. Also among the terns there, were at least 47 Least Terns, with quite a few juveniles present.

One of my favorite aspects of birding in late summer (and, no, it's NOT the heat and humidity!) is molt. Though we had to cancel the CMBO workshop on molt and plumage that I was scheduled to conduct this month for a variety of reasons, now is the time to go out and look at molting birds. Below, is one such. It is a Herring Gull that is just a bit over a year old and well into its second prebasic molt. Looking at the bird's right wing, we can see that the outermost primary (primary 10 or p10) is browner than the rest, and also narrower and more pointed. That feather is the last primary remaining on that wing from its juvenal plumage (= first basic plumage), the plumage in which it first flew about a year ago. All of the rest of the 10 primaries on that wing have been replaced or are in the process of being replaced; p9 has been dropped and, if it is growing, is too short to project beyond the primary coverts at this point; p8 is around half grown; p7 might be not-quite done growing, as it looks just a tad short.

In the secondaries (I know, what secondaries? Those things are trashed!), the outermost two secondaries (s1 and s2) have come in new, though s2 is not fully grown. Those feathers are discernible from the innermost primaries as their tips are squarer, as compared to the angled tip shape of the primaries, and their outer webs are darker than are the outer webs of the inner primaries (and those paler outer webs of the inner primaries are what creates the translucent panel in the outer wing that is such a useful ID feature of immature Herring Gulls on this side of the Pond!). The next several secondaries inward have been dropped and at least one is growing (the tip of s3 is just barely detectable beyond the tips of the greater coverts), but determining even how many have been dropped is impossible, as the juvenal secondaries that remain are so trashed! Finally, did you notice the bird's tail?  HA! 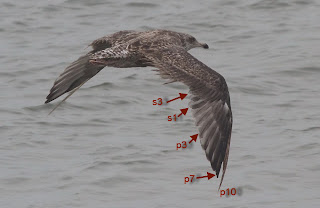 Posted by Tony Leukering at 1:38 PM