Fall is generally the best time of year for getting American Golden Plover on your Cape May or New Jersey list, and judging by the reports that have been around lately, they seem to be heading our way already. Recent reports have come from Brigantine and Malibu Beach in Atlantic County and Johnson's Sod Farm, up on the Cumberland/Salem County border. You might think that this is a relatively easy bird to find, but all that glitters on the beach is not necessarily gold and you don't want to be left with just a handful of Cape May diamonds! So here's a quick run through American Golden Plover and the most likely species to be on the beach with it should you find one - Black-bellied Plover.

The following photos are of late season birds and I took them on South Cape May Beach in late October 2010; in brighter, August sun, both species will look much brighter and more spangled on the upperparts. If you intend going out to look for your own American Goldie, it is also as well to remember that this species is as likely to turn up inland on a sod farm or turned over farm field as on a coastal beach - perhaps more so. 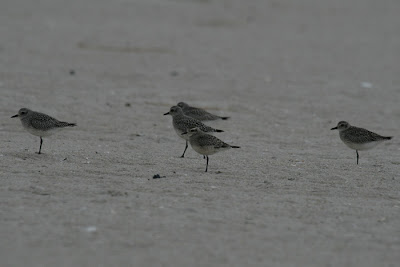 A group of large plovers on the beach on a dull October day. From a distance, there is very little to choose from them? Which is the goldie? Well, of course you always go for the one in the middle of the picture because that is what the photographer was photographing! But it is clear to see here that there is very little to go on in overall color; goldies rarely look golden, except in full breeding plumage in spring while, conversely, black-bellies can actually look browner than might be expected. 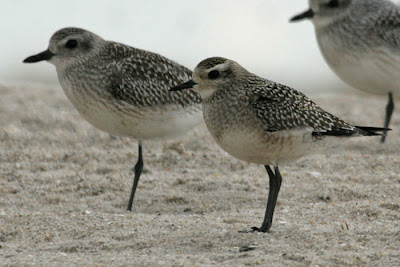 Moving in with the scope, we can start to ignore the overall color similarities and home in on the subtle differences. Here a Black-bellied Plover is at left and an American Golden Plover right (with another black-belly in the top right corner) All these birds are juveniles and show pretty much the same color on the upperparts. To me the most obvious feature of the goldie is the dark cap, making the white supercilium over the eye look much more obvious. Next comes the noticeably smaller and finer bill, without the chunkiness of the black-belly bill. Other features may be more subtle, but still useful: the goldie has a more contrasting white throat due to the more heavily marked breast - which looks more checkered than streaked; the flanks look subtly barred not streaked and, of course the bird is smaller. 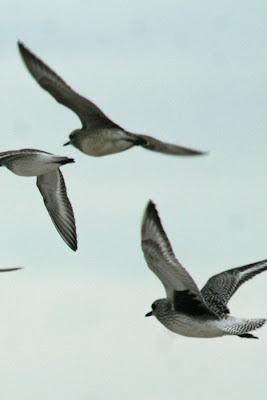 If the birds fly, you get a chance to home in on another useful feature - the famous black 'armpits' or axillaries of Black-bellied Plover (bottom bird), which contrast strongly with the white belly and remaining underwing. The top bird is our goldie, which shows a non-contrasting, dull grayish underwing. The third bird (on left) is a Dunlin, in case you were wondering!) 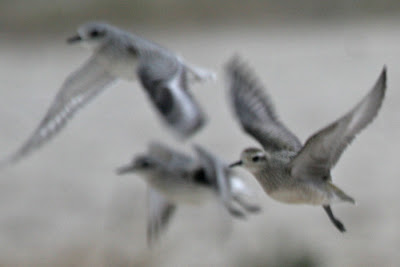 Another flight view, again showing that uniform gray underwing of an American goldie, but against a different colored background. Also interesting to note is the white underwing on the top left Black-belly, at an angle where the black axillaries cannot be seen - so it's not always straightforward! 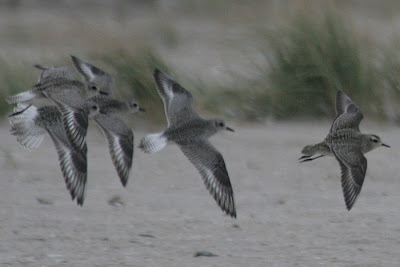 Luckily the birds wheel round and land again - I didn't scare them off before anyone else saw them!! An upperside view in flight gives us another classic Black-belly feature - the large white patch on the tail and uppertail coverts. This feature can often be visible on settled birds too, particularly if preening. The American goldie (here on the right) is solidly dark in this area and it also shows a lot less white in the wing.

Keep a good look out for these smart birds and let us know if you find one; if you have what you think is an American Golden Plover with Black-bellied Plovers, the size difference will usually be apparent and all those subtle differences can be directly compared. If you have a single bird and you are not sure which you have, forget the overall color and work your way through the other features - cap and throat contrast, underwing color, uppertail color, and bill size. Good luck!!
Posted by Mike Crewe at 4:52 PM