Higbee Beach, Northwood, back bays & beaches - all have birds

Higbee Beach put on a nice show this morning, for what was the first Morning Flight Count of the 2012 season. This year's counter, Cameron Rutt, will no doubt have the figures up for you soon on our Seasonal Research page, but I do know that over 300 Blue-gray Gnatcatchers were counted there this morning and unusual sightings included two Yellow-rumped Warblers and a total of 17 Black Terns. In the Higbee fields, warblers were showing well too, with Prairie Warbler and American Redstart being the two commonest species, while highlights for me at least included Canada and two Mourning Warblers, four Baltimore Orioles and at least 10 Empidonax flycatchers, which appeared to include at least one Willow, one Least and two Alder Flycatchers. 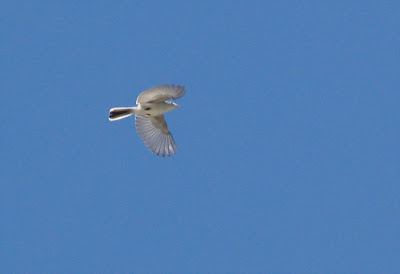 Blue-Gray Gnatcatcher - a major movement of this species took place through Cape May today [photo by Tony Leukering].

So far today, the Northwood Center trees have provided Blackburnian, Chestnut-sided, Black-and-white, Prairie and Yellow Warblers, American Redstart and Baltimore Oriole, while a Mississippi Kite was seen from both the South Cape May Meadows and Rea Farm and a Buff-breasted Sandpiper was on the beach between the state park and the meadows. 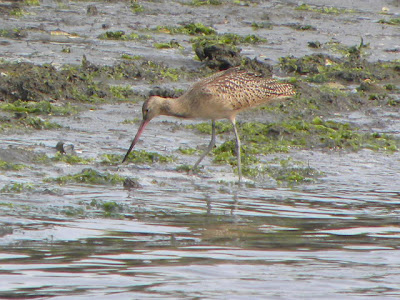 The backbays are holding some nice birds for our boat trips right now - including this Marbled Godwit that was seen from The Skimmer recently [photo by Ginny Powell].

Further afield, Pete Dunne tells me that Purple Martins are still roosting along the Maurice River in good numbers, with count estimates peaking at 200,000 on August 11th. An awesome spectacle, best viewed from the bridge over the river just outside Mauricetown. A reasonable flight at Turkey Point, Cumberland County this morning included 246 Eastern Kingbirds, 25 Bobolinks and a scattering of warblers - as well as five Bald Eagles.
Posted by Mike Crewe at 12:35 PM