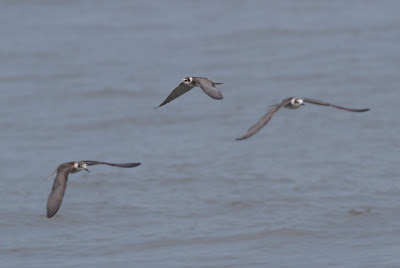 Most birders may think of August at Cape May as the month during which the landbird migration really gets going: morning flight, walking the fields at Higbees Beach W. M. A., the Beanery. For me, August brings mental images of shorebirds flying past the hawkwatch platform and, particularly, the amazing show that terns put on around Cape May Point. This is the place and time at which I finally buckled down and "learned" the terns. During August, the common local breeding species (Least, Common, Forster's) are present in large to huge numbers, the two regular southern immigrants (Sandwich, Royal) are present (Royals in variably large numbers), and migrants (Black) and rare local (Gull-billed) breeders are often findable. The adults of all species are molting body and wing feathers and run the gamut from nearly full alternate (breeding) plumage to very close to full basic (non-breeding) plumage. There are sub-adults that may not have bred but which have been wandering around the area all summer, initiating molt much earlier than the local adults and now looking quite adult-like.

This August has seen one of the better Black Tern shows in my history here, even considering last fall's excellent show. Many were the texts on the local bird-text system conveying sightings of Black Terns, particularly at and near Cape May Point. The species has been present on Bunker Pond for weeks, now, and gangs of them have been seen at immediately coastal locations, such as the various dune crossovers and the Concrete Ship (Sunset Beach). While Mike Crewe noted an excellent count of 31 at the Concrete Ship this morning (the report that got me out photographing the species today), Cameron Rutt's count of 74 passing eastward in front of the western dune crossover at Cape May Point S. P. on 20 August is the high count for the year, here. While there were a fair few adult Black Terns passing through in the early part of the month, the adult show is over here, so this post is about juveniles.

For me, the very first item that I notice when looking at a Black Tern is the flight. The species has, for a tern, a languid style that immediately sets the bird apart from the common species of somewhat similar size (Common and Forster's). The other small tern, Least, has such a frenetic flight style as to bring to mind a shorebird, rather than a tern; not at all like the flight of Black Tern. The only other tern that is regular here with a similar flight style is Gull-billed, which is probably not a coincidence, seeing as how they both do a lot of aerial hawking of insects and dipping down to pick items off the water's surface. The second feature is the darkness. No other Cape May-regular species even approaches that darkness. However, that darkness and different flight style may get some off on the wrong tangent, thinking about shearwaters or storm-petrels, rather than terns. 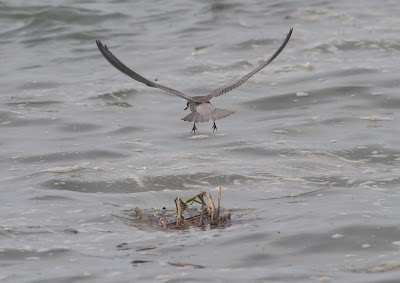 [Here, a juvenile Black Tern is dipping down to investigate some floating debris for insects; the species does not plunge dive. Notice the overall dark coloration and the dark, square tail contrasting with the silvery-gray rump.] 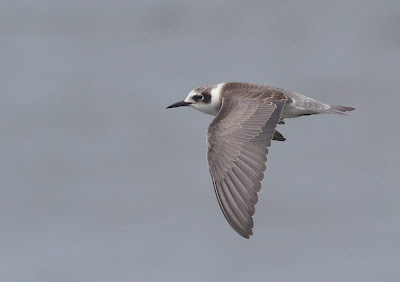 [Unlike adults, juvenile Black Terns have brown back feathering that contrasts in color, but not in tone, with that of the slaty wings. The feathers of the upperparts and wing (even the flight feathers) have pale fringes, though those fringes can be difficult to detect at any distance and once those fringes wear off (by mid-September or so).] 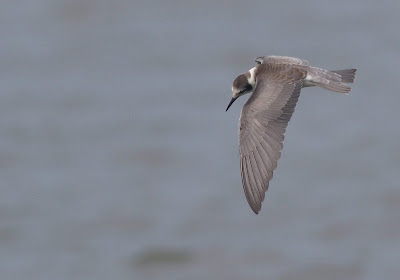 [The wings of Black Terns are broader-based than are the wings of Common and Forster's terns) and, given good views and lighting, one can detect on this juvenile the typical tri-colored pattern of very dark leading and trailing edges, less-dark greater coverts, and the paler area formed by the median coverts and most of the lesser coverts.] 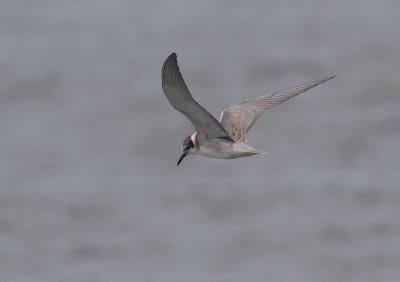 [Along the East Coast, it's always good to keep an eye out for White-winged Tern, which is nearly annual somewhere, though used to be more reliable (and numerous) in Delaware in the 1980s and 1990s. This is not a White-winged Tern. Even juveniles are fairly easily distinguished, as they are "cleaner"-looking birds, without Black Tern's smudgy gray sides and wing linings; instead, they are fairly bright white in those places. Additionally, White-winged Tern has a highly contrasting whitish rump, rather than the less-contrasting medium gray or silver rump of Black Tern.]
Posted by Tony Leukering at 5:08 PM