Dainty Sulphurs on the way?

The Dainty Sulphur is a small, yellow and black species of butterfly which - if you look at the distribution maps in the field guides - seems unlikely to be worth looking for in South Jersey. It has a population in Florida which apparently colonised the region from the Caribbean in the early 1900s and a main population throughout the southern and mid-western US. However, it already has something of a track record for vagrancy; the mid-west population is well known for occasional northward movements and it is probably this population that gets caught up in westerly air-flows and ends up on the east coast. There is a fair scattering of records not too far from us, with sightings in previous years from Long Island, New York, Pennsylvania and Virginia, but the reason I mention them now is that there seems to be a good chance right now to find this species in Cape May. Not wishing to blow my own trumpet of course, I did find the first record of this species for New Jersey when I chanced across one at CMBO's Goshen Center, when I was visiting from the UK back in 2007, but Pat Sutton has just alerted me to a Dainty Sulphur found by Sharon and Wade Wander on Depew Island, up in Warren County, North Jersey along the Delaware River in the Delaware Water Gap NRA, and this comes on the back of one reported from Maryland less than a week ago. Keep an eye out for this species if you are out about over the next few weeks - it's a good way to spend an afternoon after enjoying warblers at Higbee Beach in the morning! 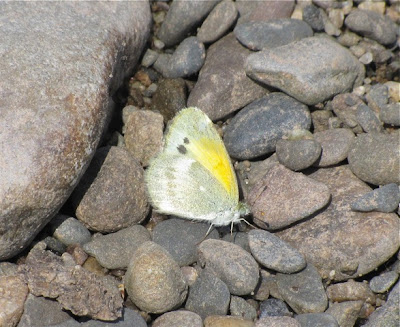 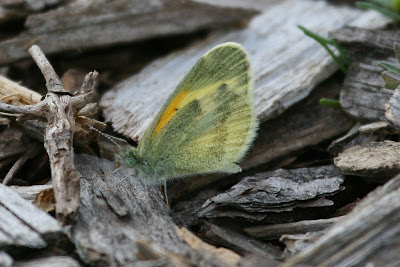 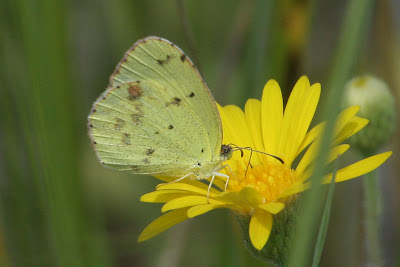 Little Yellow at Cape May Point, shown here for reference. Little Yellow and Dainty Sulphur are both very small, largely yellow, butterflies which could be confused with each other, but note differences in shape and amount of dark markings between the two species [photo by Mike Crewe].
Posted by Mike Crewe at 8:12 PM