Around the sites - and some recent photos

It's a sure sign that the season is swinging from summer to fall when our Higbee Beach Friday morning walks start, and start they did this very week! Typically for early August, the birds we saw were mostly those that have local breeding populations, rather than those from far-flung places - though a Northern Waterthrush was likely from much further north. Yellow and Prairie Warblers, Ovenbird and Common Yellowthroat all gave us good looks and it was nice to note that the annual build-up of Eastern Kingbirds has started, with at least 50 birds gathering to feed on the ripening Sassafras fruits - more will surely follow. Sanderlings and Ruddy Turnstones now jog along Cape May beaches and our local pair of Bald Eagles are still showing well on and off along the Cape May Canal or at Higbee Beach.

Elsewhere, both the South Cape May Meadows and the state park have low water levels that are attracting a great range of shorebirds, including plenty of Stilt Sandpipers and occasional appearances of Marbled Godwits. Buff-breasted Sandpipers must surely be here any day now so keep a sharp eye out for them at the point, either on the South Beach or at the Plover Ponds. Believe it or not, winter ducks are also starting to appear with recent reports of Green-winged Teal and American Wigeon. Lesser Black-backed Gulls continue to hang out on the South Beach with the growing flock of Great Black-backs. Look for the Lessers down by the tideline where they like to hunt out Mole Crabs. 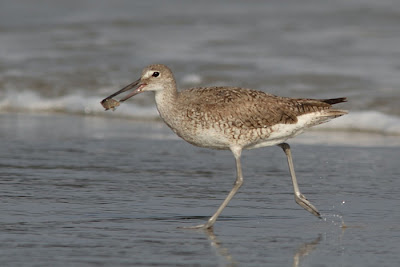 Now that we are into August, check out those Willets on the beaches. The vast majority of our local breeding population of Eastern Willets ships out of town in July and this Western Willet was already at Stone Harbor this week. Westerns are more 'rangy' than our eastern birds, with relatively longer legs and longer, thinner bill [photo by Beth Polvino]. 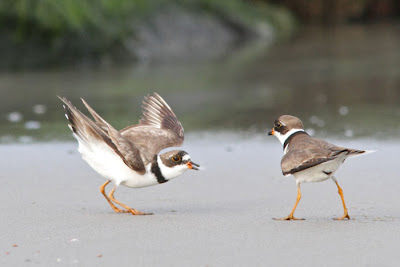 Semipalmated Plovers are often pretty boisterous with each other and offer good photo opportunities if you are prepared to sit and wait [photo by Beth Polvino]. 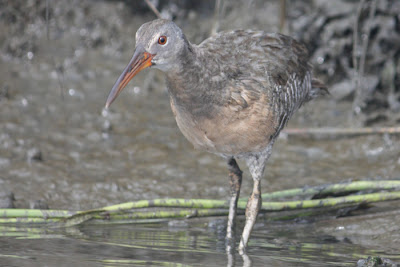 Have you tried our Birding by Kayak tours yet? If not, here's what you are missing! Beth Polvino sent me this photo, taken from a kayak, telling me that this bird could be watched from just three feet away! 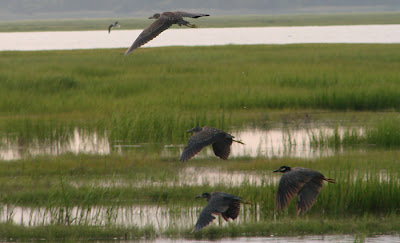 Bob Lubberman from The Osprey sent me this photo some while ago and it ended up in a post that I didn't get time to post. However, it's still not too late to book in for a back bay boat trip and see Black-crowned and Yellow-crowned Night Herons like these, up close and personal. 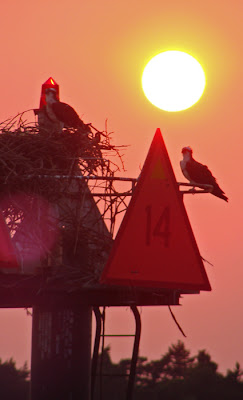 A sunset boat trip is surely the best way to get those Osprey shots that are just that little bit different from everyone elses! [Photo by Bub Lubberman]. 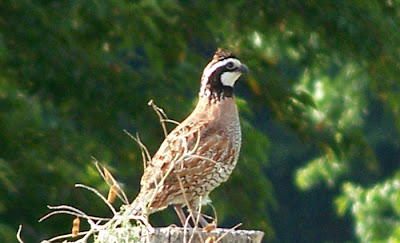 Another photo that almost dropped through the net but which I wanted to share was this great shot of a Northern Bobwhite, taken near Green Creek by Debbie Hudson in her back yard. This species seems to have become very rare in Cape May County, as abandoned farm fields and grassy meadows all get turned into housing. However, a few linger on and even occasionally show up south of the Cape May Canal.
Posted by Mike Crewe at 1:35 PM