Today's Belleplain Wildlife was once again headlined by a great variety of insects as summer begins to take a hold and birds settle into breeding routines. The 17-year Periodical Cicadas are continuing to emerge in tens, if not hundreds, of thousands and we found several locations where low vegetation was littered with the empty cases of recently-emerged cicadas. As well as all the sites in the vicinity of the town of Belleplain where we found them last week, this week we found that there was a particularly noisy bunch around the intersection right outside the entrance to the Nummy Lake Campground. Later in the day, we also heard them calling loudly along Rt550 between Mount Pleasant and Seaville - let us know if you are hearing them anywhere else in the county.

The bulk of this week's walk, however, was taken up in enjoying some fabulous dragonfly experiences. We found a good-sized Common Sanddragon population which was very obliging and allowed our cameras to come in nice and close for some great photo opportunities, while other highlights included a dazzling display by a group of Ebony Jewelwings that flashed brilliant emerald green as they darted through shafts of sunlight on an overgrown stream and a fabulous close encounter with a Banded Pennant - a scarce species in Cape May but, like so many dragonfly species this year, one that is looking set to show well this year.

Now that we are into flaming June, our summer program of events is under way; we swing away from walks that target migrants to walks and other field events that seek out interesting breeding birds as well as a wide range of other wildlife. Don't forget to check out our online events calendar or downloadable Kestrel Express - or stick to the good old fashioned way and pick up a printed Kestrel Express from the Northwood Center. Do stop by if you are in the area and add your finds to our sightings sheet so others can share in the great bounty of Cape May wildlife!

Recent Sightings
Scarce migrants are getting thinner on the ground now, but early June has a habit of producing surprises and evidence of at least some continuing movement came in the appearance of a flurry of Willow Flycatchers around our region on Saturday. Brigantine has been stealing the show from Heislerville lately with American Avocet (2), Black-necked Stilt and Red-necked Phalarope all reported from there this weekend. 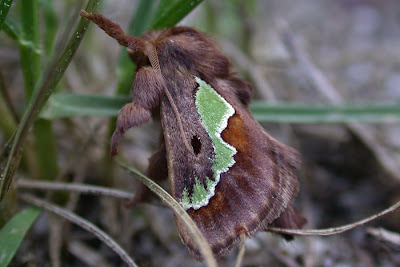 This Spiny Oak Slug was one of the highlights of a quick look at moths in Belleplain State Forest this morning. This species is one of a group whose larvae are armed with stinging spines and are thus best not tampered with [photo by Mike Crewe]. We weren't the only one looking for moths at the lights today! This first-summer male Summer Tanager was very interested in our behavior and has clearly become used to checking the same areas as us for moths attracted to lights [Photo by Mike Crewe]. 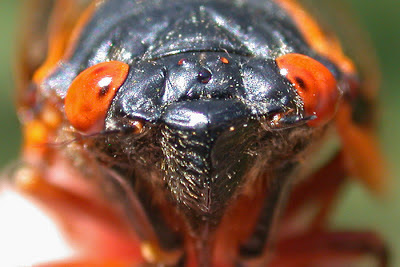 More close encounters with the extraordinary Periodical Cicadas were had today. Look closely at this head shot and you should see the three simple eyes in the top of the head, which many insects have in addition to their large compound eyes [photo by Mike Crewe]. 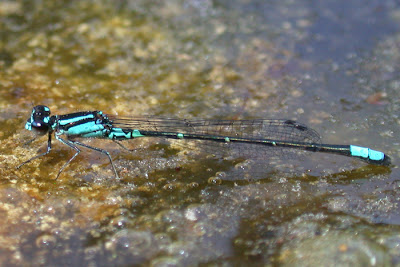 A new species for me today, good numbers of Skimming Bluets are now emerging in suitable weedy ponds in Cape May County. Keep an eye out for their distinctive greenish-blue color and that diagnostic wiggly blue area at the base of the abdomen [photo by Mike Crewe]. 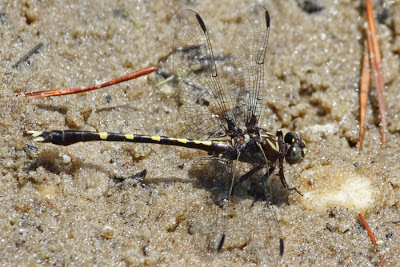 Common Sanddragon at Belleplain State Forest today. This has been a very scarce insect here in the past three or four years so seeing good numbers today hopefully indicates a good year for the species in 2013 [photo by Mike Crewe]. 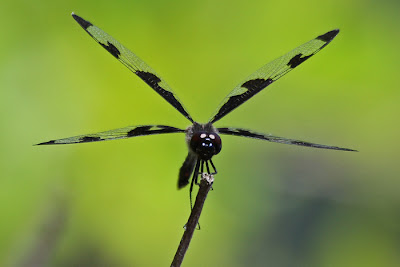 Pennants get their name from their habit of sitting atop a prominent perch and allowing their wings to blow in the breeze like little flags. Banded Pennants like this one often separate out the four wings and create fascinating visual images [photo by Mike Crewe]. 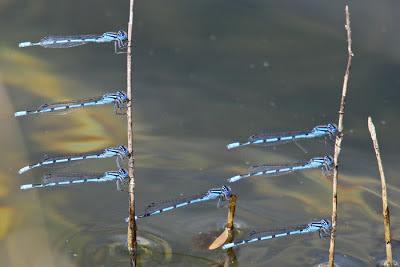 One of these guys is not like the other ones! A quick visit to a favorite pond by some of us after the Belleplain walk today revealed a large emergence of bluets. Snapping away happily at clusters of bright blue males, it was only after I had downloaded and reviewed my pictures that I realized that the vast majority of them were Atlantic Bluets and not Familiars as I had presumed. In the picture above, see if you can pick out the single Familiar! (Hint: look for the presence or absence of a light blue bar on the back of the head and a subtle difference in the very far tip of the abdomen [photo by Mike Crewe]. 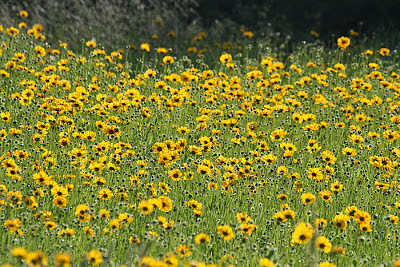 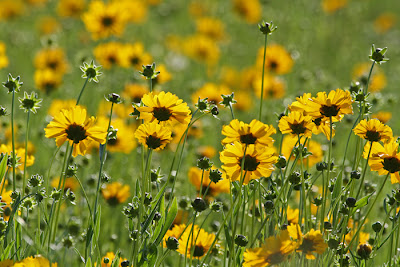 If you are heading to Higbee Beach over the next couple of weeks, take a camera and enjoy snapping the riot of color produced by a mass sowing of Lance-leaved Tickseed by NJ Fish & Wildlife. This field cover should produce a rich supply of seed for birds in the fall but for now, enjoy the pure effrontery of this sea of brilliant gold [photos by Mike Crewe].
Posted by Mike Crewe at 11:15 PM