Well, if you didn't get to see the 17-year cicadas in Cape May, it looks like you will have to wait until 2030, because they are pretty much done here now. Last week looked like the fall out from a battle scene, with dead and dying adult cicadas littering the ground, their genes passed on through their offspring and their time on the planet over. It really is remarkable just how quickly their time is over, but the signs of their presence will remain for a little while yet. Having laid their eggs in the branches of Belleplain's oak trees - and the occasional birch here and there too - the tips of the trees are looking a little sorry for themselves now and, in just a few weeks, the tiny cicada nymphs will be hatching out and dropping to the ground, from where they will tunnel down to the roots and suck sap for the next 17 years. 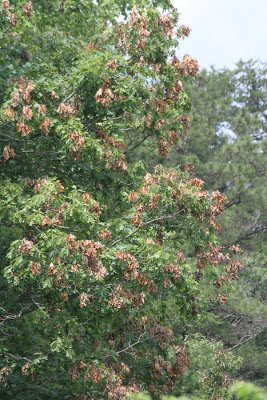 Female cicadas can cause quite a lot of localized damage to trees during the process of egglaying (see earlier post), restricting the flow of sap to the new growths and causing young twigs to die back [photo by Mike Crewe]. 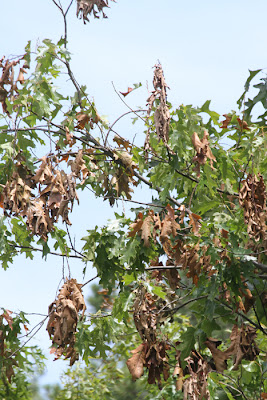 Though damage to trees can look extensive, in larger specimens the trees will simply break from buds lower down the stem next year and not cause any longterm problems for them [photo by Mike Crewe]. 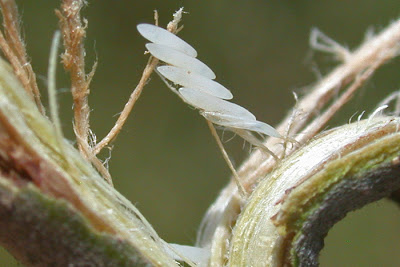 A peek inside the stem of an oak reveals a short string of tiny cicada eggs which will hatch in a few weeks time [photo by Mike Crewe]. 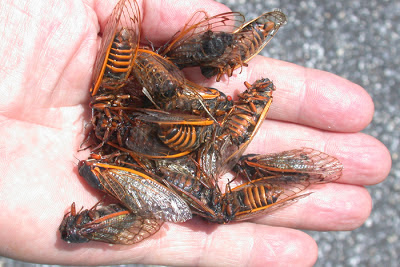 Nature can seem pretty harsh sometimes as piles of dead cicadas litter the forest floor, in turn to be eaten up by ants, millipedes and other woodland minibeasts [photo by Mike Crewe].


Recent Reports
Summer always sees a dearth of bird reports, but Brigantine has been kept busy with American Avocet and two Marbled Godwits of late. In Cape May County, Willow Flycatchers have been decidedly scarce this year, but one still appears to be hanging on at the South Cape May Meadows. My own wanderings around the county suggest that Prothonotary Warblers are having a good season in what has so far been a very wet year with a lot of water laying around in swamps and marshes. The latest one I picked up on during my travels was singing right beside Rt 83 about 400 yards from its intersection with Rt 47. At least four Cattle Egrets are being reported intermittently from the care home lawn across from the entrance to Avalon Golf Club on Rt 9, north of Cape May Court House and it seems very likely that this species is breeding somewhere in the county now.
Posted by Mike Crewe at 4:45 PM