I reckon Cape May has more than its fair share of rain so far this year, though we have had far less than the poor souls along the foot of the Appalachian ridge - and I am sure that those suffering yet another prolonged drought in the south-west would give anything for just a bucketful of our rain to water their gardens. Wave after wave of rain clouds and thunderheads have loomed on the horizon over the past month and dumped a record amount of water in the Philadelphia region - the most rain for June since records began I am told.

Despite all this watery madness, wildlife has to get on with the daily grind, the daily chores of eating, and avoiding being eaten. No mean feat at times. So far, from what I have seen, this year's breeding season has been a real hardship for many birds. The entire Least Tern colony at South Cape May Beach was deserted a couple of weeks ago, and tracks in the sand seem to suggest that mammalian predators - probably Red Foxes and Raccoons - have been the main culprits. While ground nesters can soak up a certain amount of predation, a concerted effort by predators that know when they are on to a good thing can eventually cause the whole colony to break down. What to do? Well, tough decisions need to be made by those that are charged with looking after these birds; in our quest for pleasure and leisure, we have collectively sidelined so much of our wildlife - pushed it into a convenient corner where it can sit and not disturb us from our whims and fancies. Having reduced so many species to barely sustainable population levels in often less than optimum habitats, it falls upon brave guardians of our wildlife - those good people who work for such bodies as state Departments of Environmental Protection and Fish & Wildlife organizations - to come up with management plans to sustain these endangered species. Management plans often involve some very difficult decisions, and those decisions often mean having to control numbers of predatory species. All this is basic environmentalism, page 1 of the wildlife management text book, something that everyone who trained for the job has learned how to do, because it works; and yet these tough decisions often can't be made because of fears about public opinion.

Over the past couple of months, the management of endangered species around Cape May has often cropped up in conversation on our regular weekly walks and one thing has become clear to me - public opinion does support doing the right thing. Controlling predators is not a fun day out at the park, it's a job that needs to be done and it seems to me that people understand this. Our coastal breeding birds are suffering heavily from predation by Fish Crows (a species at artificially high levels here due to the easy life we provide them through hand-outs and provision of more than enough breeding locations in our gardens), while areas provided for such species to take their chicks for post-hatching cover and feeding opportunities are being rendered totally unfit for purpose by an artifically over-abundance of introduced Mute Swans and Canada Geese.

Wildlife no longer has the freedom to go where it wants and do what it wants; if we are going to shoe horn endangered species into convenient corners, then the very least we should do is look after them once they have been pushed there.

OK, time for a lighter note - it is the glorious 4th of July after all - and last night's fireworks on the bayshore were a real treat (and topped just marginally for me only by my favorite Brit, Mark Cavendish, winning his first stage of this year's Tour de France in Marseille - go Manx Missile!!). While some species are no doubt suffering this year, others seem to be doing OK. I have certainly been noticing good numbers of Prothonotary Warblers in wet woods this year, as well as more than the usual number of Acadian Flycatchers calling from woodland around the county. Marsh Wrens and Clapper Rails have been remarkably easy to get to grips with at Jake's Landing for much of the spring and early summer period and I have recently been hearing of pairs of Gull-billed Terns regularly wandering the top end of Cape May County. There must surely be some species benefiting from the cicada crop this year too but a little more time is needed to see where that one goes.

Though today was July 4th and a vacation for many, my wonderful, trusty volunteers and I were out leading a walk at Cox Hall Creek today. To celebrate the day, we took on the task of building up a list of species that represented the union; species that were listed as state birds, species with red, white or blue in their names, or species named after locations in the US. And of course, being our Birds, Bugs and Botany walk, we had a great wealth of species to choose from. In the event, we did pretty well - the likes of Carolina Chickadee and Maryland Meadow-beauty served up some state names, American Robin and American Crow of course gave us the whole country in one go and many red, white and blues filled our list - White Oak, Great Blue Skimmer, Red-bellied Woodpecker - the list was wholesome and good! Northern Cardinal and Northern Flicker made the grade as state birds. A good time was had by all and, if you couldn't make it, we look forward to seeing you next time!

Happy Independence Day one and all!! 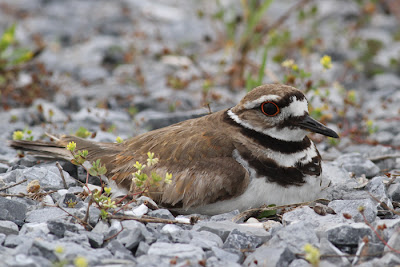 Some birds get on with the task of raising a family despite us Humans! This Killdeer has settled neatly into the gravel parking lot at The Nature Conservancy's South Cape May Meadows. This is a pretty late start, so this bird may well have already lost an earlier brood this year [photo by Mike Crewe]. 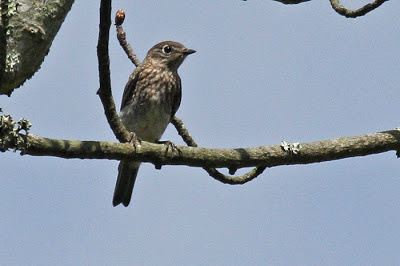 A bird that certainly does well thanks to us Humans - but can you identify it? This fledgling Eastern Bluebird will wear this unfamiliar spotty plumage for just a few weeks before molting into its familiar blue and orange combination. This is a species that certainly benefits from the kindness of those who provide plenty of nest boxes for them to use [photo by Mike Crewe]. 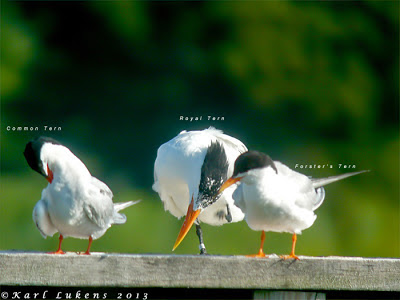 On our Wednesday walk at the state park this week we were treated to an impromptu tern workshop as our first Royal Terns of the season showed up. Royal Terns, with their black legs, slightly shaggy crests and large orange bills are pretty easy to identify, but this photo also helps demonstrate the subtle difference in leg color and leg length between Common and Forster's Terns [photo by Karl Lukens].
The holiday weekend will shortly be upon us - pop into the Northwood Center and say hello and we'll give you all the help you need to enjoy your weekend at sunny Cape May (yes, it's been sunny today!!)
Posted by Mike Crewe at 8:25 PM