Time to hit the water

With temperatures continuing high for a while, it looks like it's going to be a great time to get out on the water, and judging by the number of people I have seen doing just that of late, it is clear that Cape May's backbays are the place to be right now. With water levels higher than usual at ponds south of the Cape May Canal, shorebirds can be hard to pin down at the moment as there just isn't that much marginal habitat for them to feed in. So the answer is to get out on a boat and get ready access to the intertidal areas, for here you will always find some mud while the tide is out, regardless of any rain.

From July onward, the backbays bristle with activity as the young of local breeding birds such as Clapper Rails and both Yellow-crowned and Black-crowned Night Herons get out into the channels, Ospreys ferry food to their ever-growing youngsters and the southward migration of shorebirds really starts to get underway. Right now, Least Sandpipers and Short-billed Dowitchers are dominating the shorebird flocks, with many more species to follow as the season progresses. Locally breeding Eastern Willets will be around for a few more weeks yet but, once July is out, they will certainly become harder to come across and will gradually be replaced by migrant Western Willets which pace through here on their way south.

One thing is for sure, a July boat trip will get you some great up-close birding opportunities and might, just might, turn you up something really special. Just a few days ago, I received an email from Charlie Steiger of Wildwood Crest. Charlie had been out on his boat and photographed a bird that he wanted confirmation on - and Charlie's guess was right - a juvenile Brown Booby had landed right on his boat, right off Cold Spring Inlet!!

Check out our online calendar or Kestrel Express, or pick up a printed Kestrel Express from our store off Lighthouse Avenue and see what boat trips we have coming up. Most trips offer loaner binoculars and/or the assistance of local naturalists to help you get the best from your trip. Oh and don't forget your camera. Oh, and don't forget to share with us what you saw! 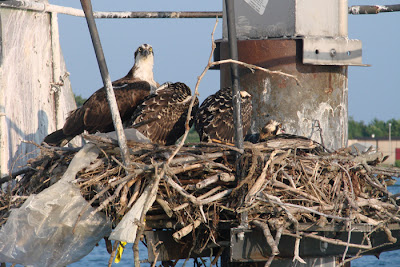 It is very appropriate that Bob Lubberman, Captain of The Osprey and organizer of some fabulous backbay boat trips for us, took this great photo of an Osprey family in Cape May Harbor recently. Osprey chicks are getting pretty big now and can easily be told from the adults by the pale tips to their brown upperparts, giving them a very speckled look when compared to the plain brown adults. Boat trips such as these offer wonderful opportunities to get up close and personal with these birds as they get used to passing boats. 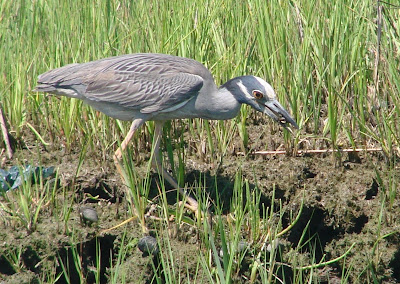 The intertidal backbays and creeks always have feeding opportunities for wading birds when the tide is not at high water, even when freshwater ponds are full after recent rains. Many of these areas are almost impossible to get to on foot, so a boat trip really is the best way to get in amongst the birds - like this adult Yellow-crowned Night Heron, photographed recently from The Osprey [photo by Bob Lubberman]. 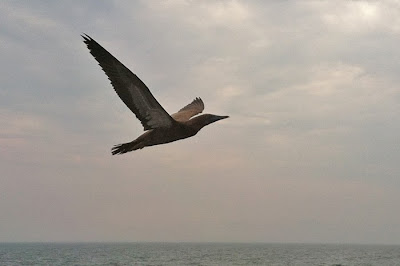 On July 11th, Charlie Steiger was running a short fishing trip off Cold Spring Inlet when this all-brown bird came flying right around the boat. As Charlie surmised, the bird is a Brown Booby - perhaps the one that had previously been reported from further north along the New Jersey shore [photo by Charlie Steiger]. 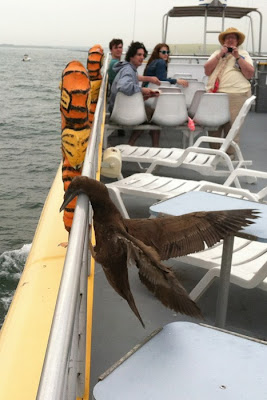 During its time with the fishing party, the Brown Booby even tried to land on the boat, but here it seems to have misjudged the precise location of the handrails!! While it's fair to say that many unusual bird sightings turn out to be something relatively common but seen under unusual circumstances, there is always the outside chance of finding something as rare as this booby and the best way to deal with it - is to always have a camera handy!! [Photo by Charlie Steiger]

Recent sightings
Most good sightings recently have been of waterbirds, reflecting the fact that migrant shorebirds and other waders really are the birds to be focusing on right now. A Stilt Sandpiper was at Heislerville on 21st (incidentally, I hear that Heislerville impoundments are to have the water kept drawn down through Fall this year, so it certainly will be worthwhile checking them on a regular basis), two Snow Geese and an American Bittern were reported from Brigantine on 19th and two Ruff and an American Golden Plover were at the latter site on 21st. A fly-by Black-necked Stilt graced our Meadows walk this morning - albeit briefly - and a White-winged Scoter was on the sea off the Cape May beachfront today.
Posted by Mike Crewe at 3:55 PM