When it comes to the natural world, one thing you can always be sure of is that each year will have surprises in store. This is perhaps never more apparent than with our local insect populations, which can be heavily influenced by winter weather conditions. After a relatively mild winter and a cool, wet spring, butterfly numbers seem to be very low this year (and it will be interesting to see if our annual Cape May County butterfly counts confirm this). This slump in numbers may be due to the mild winter allowing high numbers of predators/parasites to survive and/or the damp spring, which can see large numbers of insect pupae be adversely affected by fungal infections. Conversely, dragonflies seem to be having a real boom year in Cape May County - perhaps as a group of insects that spend their immature stages in water, they benefited from a low number of days when waters froze over during the winter, and an abundance of surface water still around now for egg-laying opportunities.

Whatever the reason, dragonflies are almost impossible to overlook at the moment and offer some fabulous wildlife viewing and great photo opportunities at a time when the birding can be a little on the slow side. Here's a short photo gallery of some newsworthy dragonflies in our area right now: 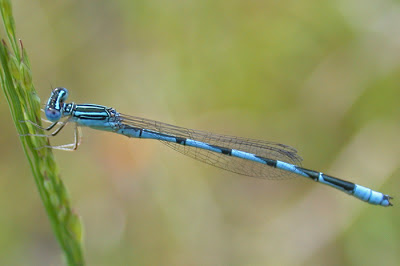 On one of our Birds, Beasts & Botany walks recently, we added Cox Hall Creek WMA to the sites at which we have found the diminutive Double-striped Bluet. This damselfly was first recorded in Cape May in 2010 and seems to be slowly increasing its range in the central part of the county [photo by Mike Crewe]. 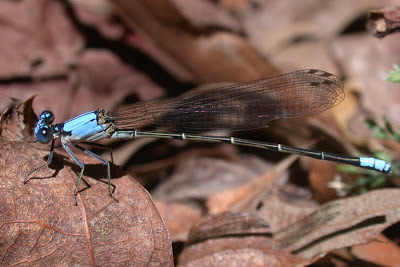 Over the past three years, we have been mapping the distribution of dragonfly species in Cape May County. Such projects can be repeated at intervals and this methodology can provide important insights into the state of the region's wildlife. Finding a new species is always one of the potential highlights of such work, and a small colony of Blue-fronted Dancers (above) on a woodland trail near a pond in Lower Township provided the latest new discovery for the county [photo by Mike Crewe]. 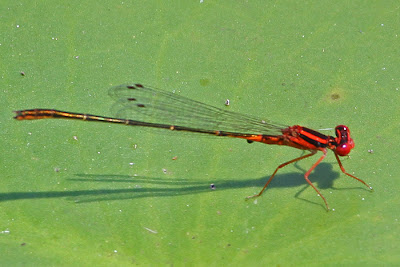 One of our more spectacular small damselflies is the Scarlet Bluet, a species of Special Concern in New Jersey. This year is proving to be a very good year for this species and it should be looked for in the north of Cape May County, on large ponds with plenty of emergent vegetation and water-lilies [photo by Mike Crewe]. 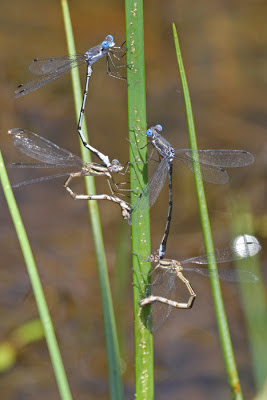 Some species display greatly fluctuating population levels, perhaps none more so in Cape May than the Sweetflag Spreadwing. This species occurs at well-vegetated ponds in the lower half of the county and this year seems to be going through a real boom period. Spreadwings can be tough to identify to species, but modern digital cameras are making identifications in the field far easier for many species (including this one) and, thankfully, collecting insects is rapidly losing popularity, except where required for important scientific study at museums and other scientific faculties [photo by Mike Crewe]. 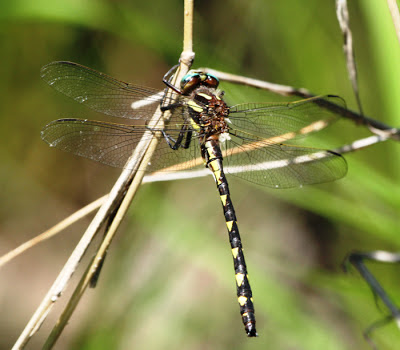 Digital cameras are increasingly becoming essential kit for the field naturalist and, as the old addage goes, a picture can speak a thousand words. This Delta-spotted Spiketail in Belleplain State Forest represents the only recent record that I have heard of in Cape May County of what appears to be a very rare resident or erratic visitor to our region (and I still haven't seen one yet!) [photo by Brian Johnson] 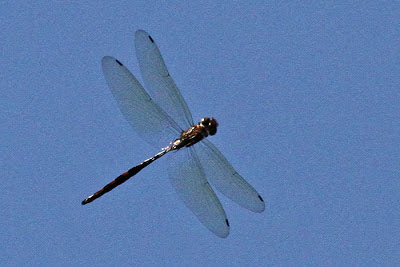 Mocha Emerald is another species that Tony Leukering and I added to the Cape May County list in 2010. Another way that digital cameras can help is with simply allowing time to study an insect that won't stay still! I photographed this dragonfly as it hunted the treetops in Dennis Township recently and cropping and zooming in on the photo allows us to see the orange bands and narrowly-waisted abdomen of a male Mocha Emerald - our fourth location now for the species here. Without the camera, this individual would have remained unidentified [photo by Mike Crewe]. 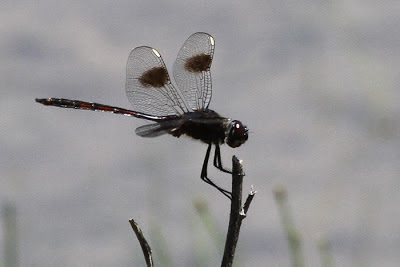 Again, the camera records the moment! Four-spotted Pennant is a southern species that, in Cape May County, seems to be confined to ponds south of the Cape May canal (though it has been recorded from Cumberland County in the past too). This individual was on a vernal pond in Rio Grande on Independence Day and may indicate that the species is beginning to establish itself northward. Continued monitoring will be the best way to be sure [photo by Mike Crewe]. 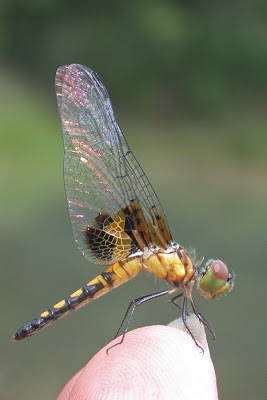 The pennants are always a popular group of dragonflies, often preferring to perch openly atop a grass stem or dried stalk that offers a good vantage point to hunt insects - a handy finger tip was favored by this female Martha's Pennant! Six pennant species may be found in Cape May County and all seem to be doing very well this year. Banded, Martha's and Double-ringed Pennants are all rather local species here, but can currently be found on a number of ponds in the area [photo by Mike Crewe]. 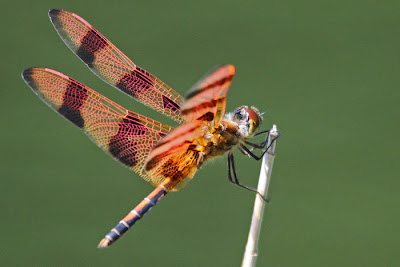 And finally.... if any one dragonfly can get someone interested in these fascinating creatures, it has to be the male Halloween Pennant. For shear exuberance and preposterousness, this insect surely deserves to be enjoyed - preferably as it perches in your carefully restored patch of native gardening, against a glowing amber sunset, while you enjoy your favorite sundowner.... Martini anyone?! [photo by Mike Crewe]

Recording our wildlife on a regular basis is not only important, it's also fun. But the first step is learning how to identify what we have. Saturday July 13th we will be holding our next dragonfly workshop, with much of the day spent enjoying these insects out in the field. We still have just a few spaces left so why not give us a call and book your place - with so many dragonflies around right now, this is the year to get started!
Posted by Mike Crewe at 2:15 PM