An interesting mix of early migrating birds and late breeding individuals is filling our regular weekly walks at the moment. On the one hand, House Wrens continue to start new nests in local boxes, on the other hand, many of our walks are now being highlighted by small parties of Short-billed Dowitchers, Least Sandpipers and Glossy Ibises passing overhead. A recent evening walk at Avalon gave some great views of local Black-crowned Night Herons flying out from their daytime roost to feed, while the beach is starting to fill with Semipalmated Sandpipers and Semipalmated Plovers. A good tip if you are visiting Cape May at this time of year is to visit the barrier island beaches after 5:30PM - you will be surprised how the people melt away and hungry migrant birds finally get a chance to find somewhere to feed.

Over the past week, small numbers of Brown Pelicans have been making their way north, most reliably being seen from either Cape May Point or Stone Harbor; tern numbers are steadily building up at the point too, with occasional reports of Sandwich and Roseate Terns - though these last two species have been very elusive and mostly move on quickly when disturbed by beach walkers. My first white juvenile Little Blue Heron of the season put in an appearance on our Wednesday walk this week and was a little more expected than the wacky, half-white-half blue, second-year bird that showed up last Friday (12th).

Stone Harbor Point is always worth a visit or two at this time of year and Tom Reed turned up two Brant and a Roseate Tern there on July 15th, while a little further away, Brigantine continues to attract good shorebird numbers and recent (unchecked) reports have included Brant, two Marbled Godwits, White-rumped Sandpiper, Wilson's Phalarope and Roseate Tern.

Temperatures approaching 90F have been a feature of the past week around Cape May and a southerly airflow has seen an impressive influx of migrant dragonflies, mostly involving Great Blue Skimmers and Swamp Darners. Many other species continue in good number too, and reports of Comet Darners from Cox Hall Creek probably also involve migrants. Butterflies remain a little on the lean side this year - though I still haven't heard results of the Cape May County Butterfly Count yet. Despite what appears to be a quiet year for many species, there has certainly been a noticeable increase in the last few days with Broad-winged Skippers now much in evidence at Sweet Pepperbush flowers and the coming week or two should see some great butterflying - I notched up my first Monarch of the year last Monday in Cape May Court House, a slightly tatty Juniper Hairstreak on Wednesday at Higbee Beach and a Hackberry Emperor at the Northwood Center today.

The weather looks interesting for the coming week; though continuing hot, localized rain showers could bring in good numbers of passing migrants. It's always a good move to get out as soon as possible after a rain shower and check what is riding out the weather. 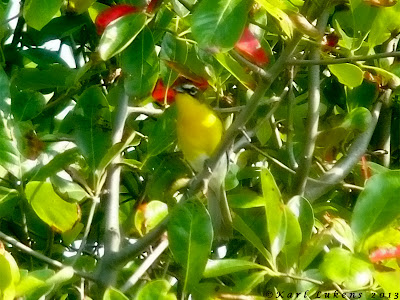 Some of our local breeding species continue to put on a good show right now; Yellow-breasted Chats are still singing at a variety of open locations around Cape May Point and often seem to show better midsummer than they do when they first arrive [photo by Karl Lukens]. 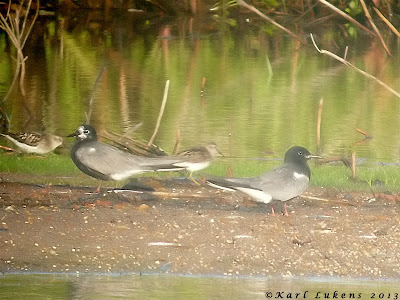 Keep an eye on the weather and visit Cape May wetlands after the passing of a good shower. Last week saw the sudden arrival of three adult Black Terns, nine Spotted Sandpipers and some 50 Least Sandpipers at the South Cape May Meadows after a particularly heavy shower [photo by Karl Lukens]. 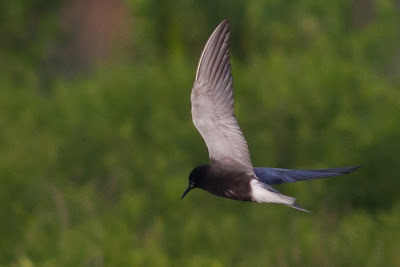 Late summer and early autumn is a good time to look for juvenile Black Terns at Cape May Point, but it is far less usual to see smart adults in full breeding dress here. This bird was one of three at the South Cape May Meadows on 11th [photo by Tom Reed]. 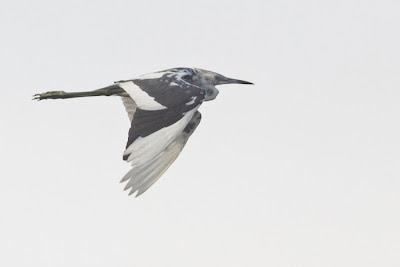 A brief fly-over was all we got of this intriguing-looking bird, but it was long enough for a group of us to enjoy this second-calendar year Little Blue Heron. Little Blues start life in all-white plumage and eventually molt into the distinctive slate-gray colors of adulthood. This bird is part way through the process and looks rather startling! [Photo by Tom Reed] 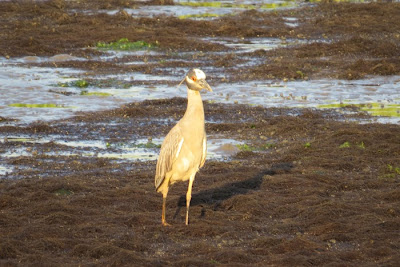 Time and again we get great reports of the wonderful birding to be had on a CMBO boat trip around Cape May's back bays. We have plenty of trips to choose from, either around Cape May itself, or up at Somer's Point on the Great Egg River. This adult Yellow-crowned Night Heron was a popular highlight on one of our recent trips [photo by Warren Cairo]. 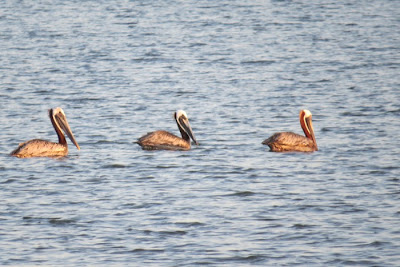 Keep an eye out on the backbays and waterways behind the barrier islands for Brown Pelicans, which are currently heading north to feed and relax for a few months before heading back south for the winter [photo by Warren Cairo].
Posted by Mike Crewe at 12:15 AM