Summer is always a great time to be out and about in the countryside and July is a particularly good month to be chasing butterflies. This month sees the annual Cape May County butterfly census taking place, a long-term project that is providing some interesting insight into the ups and downs of these interesting insects. Surveying insects is almost always a long-term affair, since many species have peaks and troughs in their population levels that can swing wildly from one extreme to the other and back again quite rapidly, making data collected in a single year rather limited in what it can tell us.

There are many reasons for these big population swings, the most apparent being the effects of weather (both during flight periods and during the winter months) and the effects of predators - and predators can include obvious things like birds, or far less obvious things like parasite loads. While it seems to have been an excellent year for dragonflies so far this year, 2013 has generally been less favorable for butterflies so the results of the survey next week will be of great interest. Despite a poor showing of some species, however, there is still plenty of great butterfly moments to be enjoyed around Cape May and July really is the month to be out there. Just this past week I have noticed a very obvious increase in the number of butterflies I am seeing; Common Buckeyes are arriving from the south, Eastern Tiger Swallowtails continue a recent run of good years and an abundance of skippers is just about to burst upon us. 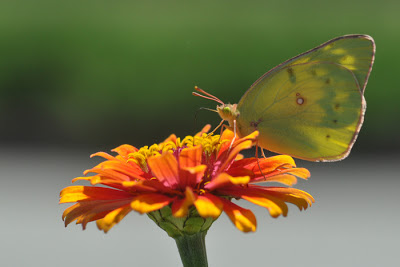 Butterflies have become such an important part of so many people's lives; their often vibrant colors, vivacious lifestyles and pure 'Joie de Vivre' are enough to inspire artists, poets and gardeners alike. This Orange Sulphur on a garden Zinnia says it all [photo by Will Kerling]. 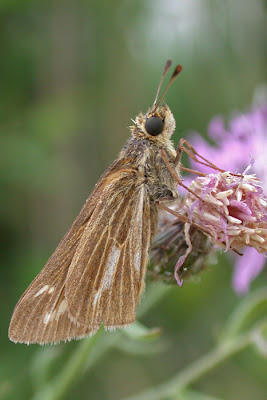 OK, so it's not true that butterflies are always the colorful ones and moths the dull ones - but even this Saltmarsh Skipper posing on a Spotted Knapweed flower offers an interesting combination of colors and markings. This species will be peaking over the next few weeks and can be very plentiful on flowers some distance from saltmarsh breeding areas [photo by Mike Crewe]. 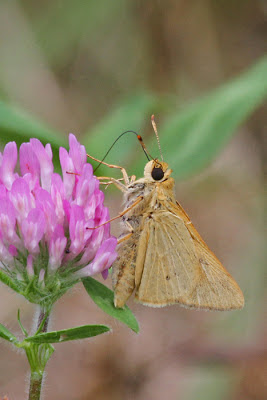 Sometimes dull can mean rare! The so-called Rare Skipper got its name as it managed to elude the studies of mankind for nigh on 100 years after its initial discovery in the south-eastern US. We now know it to be very localised but occasionally common in certain parts of Atlantic coastal saltmarshes and it can often be one of the highlights of a day's butterfly viewing in Cape May County. Note the subtle pale rings on the abdomen and the orange tips to the antennae [photo by Mike Crewe]. 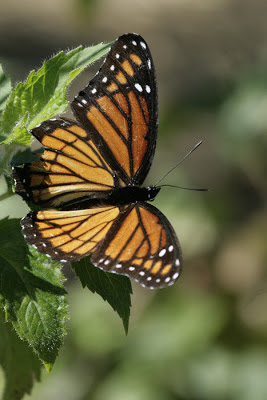 Mimicry in butterflies is not uncommon, particularly in the tropics and has been well-studied. Perhaps the most obvious local example is the Viceroy (above) which does a pretty good job mimicking the Monarch [photo by Mike Crewe]. 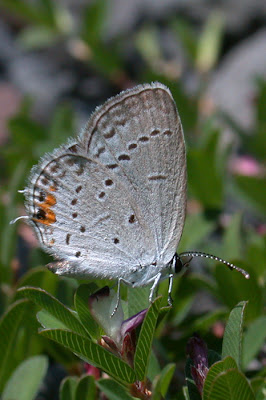 With many species on the decline, it is always nice to witness a success story. Eastern Tailed Blue has benefited from being adaptable and has readily taken to using introduced members of the pea family as a larval foodplant. This female was photographed during an egg-laying session on Japanese Clover [photo by Mike Crewe]. 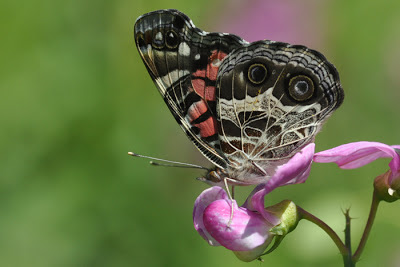 American Ladies sport wonderful big eye spots on the undersides of their leaves, readily identifying them from the very similar Painted Lady [photo by Will Kerling]. 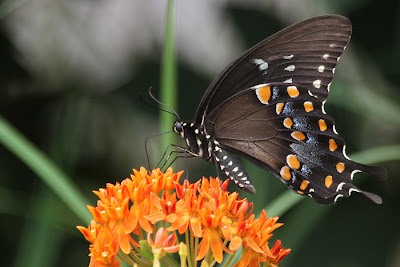 Back to exuberance again - who can resist the sight of a Spicebush Swallowtail quivering its wings as it takes nectar from the almost flourescent flowers of Butterfly Milkweed? [Photo by Mike Crewe]


With butterflies really coming to the fore now - both in variety and in number - our Butterfly Bonanza workshop is perfectly timed. Spend a day with the incomparable Will Kerling and learn about the lifestyles of our butterflies and how to identify them. There's still time to book a place - just call us on 609-861-0700 and join us next Thursday for a day in the field.