Having had a very nice Wednesday morning walk at the state park this morning (check out our events calendar!), I can officially say that fall migration is well and truly under way. Post-breeding gatherings of terns have started on the South Cape May beach and included 10 or so Royal Terns, while the beach also provided us with a flock of eight American Oystercatchers (with two others further down) and our first Western Willet of the fall - a nice and easy long-billed, long-legged individual. Small parties of Short-billed Dowitchers and Lesser Yellowlegs passed overhead and a Spotted Sandpiper was on the plover ponds. A nice highlight was the sight of two Brown Pelicans lumbering out of the bay - birds probably heading northward still on a post-breeding dispersal at this time of year.

Other birds of note recently include at least two Roseate Terns on a couple of occasions at South Cape May Beach, but recent increased disturbance there seems to be keeping them away and most recently I heard that they had been spending time at Two-mile Beach, where Michael O'Brien reported them on July 9th. A report of two male Ruddy Ducks from the mouth of the Tuckahoe River continues a run of reports of this species in the area this year, while a scattering of non-breeding Black Scoters seem to have all met up to molt, with 25 reported from the coastguard unit on 9th.

But the breeding season is far from over for many birds. Also on this morning's walk, we noticed that a pair of House Wrens has taken over one of the nest boxes that Tree Swallows have now finished with, while we also watched a pair of Cedar Waxwings bringing nest material in to a Pitch Pine right beside the trail. Yellow-breasted Chats are vocal again at the state park and may be on second broods now and Orchard Orioles are still busy with nests there. A female Pine Warbler seen this morning was probably from the pair that appears to have bred in the state park this year. 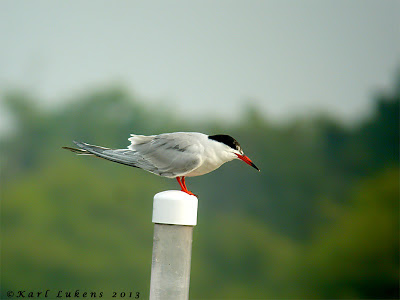 Our 'default' small tern in Cape May County is Forster's Tern, so it is always nice to get full on views of a Common Tern like this one every once in a while. Though birds will soon be losing their full breeding colors, there is still a little time to get out and practice separating these two, rather similar species. On this Common Tern, note the obviously scarlet - not orange - bill and legs [photo by Karl Lukens].

A little further afield, Brigantine continues to host a nice range of shorebirds, including a couple of Marbled Godwits and a Red-necked Phalarope recently.
Posted by Mike Crewe at 4:00 PM