As witnessed by the scattering of reports of Willow Flycatchers from the area, it really is early June - and yet reports of decidedly more northerly birds that generally only spend the winter with us continue to crop up. Last Saturday (8th) a Red Crossbill was heard by Sam Galick and I (we felt it sounded like a type 10) at Belleplain State Forest, while Pine Siskins continue to be reported, with Karen and Brian Johnson still getting a couple at their feeder in Eldora and one reported flying over Stone Harbor on June 9th. Also on 9th, a White-winged Scoter and a Brant were in Jarvis Sound and a Red-throated Loon was off Avalon, while Karl Lukens still has a White-throated Sparrow visiting his feeder on Seagrove Avenue

On the flip side of these 'winter' birds, a Black-throated Green Warbler has been singing and seemingly holding territory just in the county at Head of the River and Mississippi Kites made the news again today (12th) when Michael O'Brien reported the extraordinary sight of 14 of them perched at the Lake Nummy campground at Belleplain. The last report I heard of for Roseate Tern was at the state park on 7th, but the species is always worth looking out for at this time of year.

Late news also came in of a Curlew Sandpiper photographed with a group of Red Knot at Corson's Inlet by Deborah Rivel - a great bird for your Cape May list! 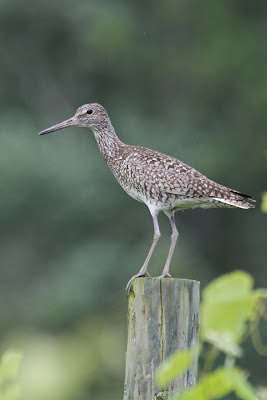 As well as birds at odd times of the year, I've been seeing birds in odd places - how about this Willet in a vineyard!! From the behavior, it seems as though a pair of Willets are nesting in a grassy field beside this vineyard in Erma and the birds are not averse to using the vineyard posts as lookouts. Shorebirds act very differently during the breeding season compared with their mud paddling behavior in the winter and many species use posts, trees and other tall objects as look outs. Some species even nest in trees in old thrushes nests! [Photo by Mike Crewe]
Posted by Mike Crewe at 12:47 PM