Watching you, watching me

Whenever you walk through the woods of Cape May, you can rest assured that there are many pairs of eyes keeping an eye on you - many pairs that in the normal course of events you just will not be aware of. Over the past few weeks I've been keeping an eye on hollow trees and any other little nooks and crannies I might come across, in the hope of finding something a little different looking back at me. Of course we are all used to seeing birds use holes in trees as nest sites and many of these holes are made by woodpeckers in the first instance. But larger holes are common too, most often the result of a storm, or some other dramatic event in the life of the tree which caused a limb to fall off, or the top of the tree to blow out. Such holes often make homes for some of our woodland mammals, many of which are nocturnal and thus not seen too often, even though they may actually be quite common. Here's some eyes that were watching me while I was watching them - a surprise in store in every hole! 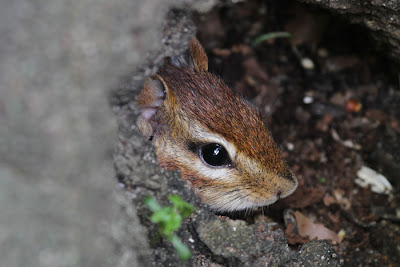 Eastern Chipmunks can be very common and even become tame in many parts of New Jersey but in Cape May they are decidedly uncommon. It is not really clear why this is, though it is known that feral and domestic cats take a fair number of them in many areas and the large population of cats at large in Cape May County in general may well be part of the issue. If you want to find chipmunks in Cape May County, your best chance is in remoter parts of Belleplain State Forest [photo by Mike Crewe]. 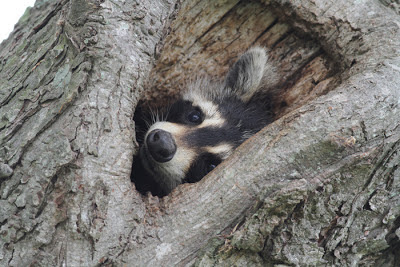 A larger hole was needed to provide a home for this guy! This raccoon has been a regular feature in our front yard of late and can be viewed quite easily straight out of the kitchen window! Living with raccoons is not too difficult provided you keep a clean and tidy property and don't leave food scraps or other trash lying around [photo by Mike Crewe]. 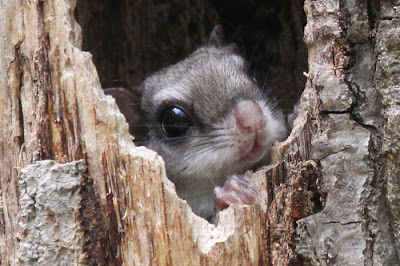 This one has kept me waiting for fours years, but recently I came across this Southern Flying Squirrel in one of the quieter corners of Belleplain State Forest. Flying squirrels are strictly nocturnal which makes them tricky to study but they will visit garden bird feeders in some areas. They are only about two thirds of the size of a Gray Squirrel so you should have no trouble telling the two species apart [photo by Mike Crewe].

Check out a few tree holes in your area and see what you can find - but don't forget to approach with caution until you know what's in there!
Posted by Mike Crewe at 12:42 AM