A Classic Cape May SpringWatch Day

With the forecast of a chilly, northerly wind making prospects for today seem not overly promising, it looked as though birding Cape May Point might be something of a challenge today. Starting a Cape May SpringWatch count at a little after 06:30 this morning I was therefore pleasantly surprised to see plenty of birds ferrying up and down the Delaware Bay. A three-hour count this morning eventually turned in a count of over 1100 Laughing Gulls heading north, making it the first really big push of this species so far this spring. With them came a scattering of Forster's Terns and Bonaparte's Gulls, the beginnings of a serious northward push of Double-crested Cormorants and a continuing build up of Red-throated Loons in The Rips.

Passerines came today also; small numbers of Barn and Tree Swallows trickled along the beach, Pine and Palm Warblers moved through the dunes and dune scrub and interest came in the shape of a couple of Wood Ducks, Bald Eagle, Sharp-shinned Hawk, six Horned Grebes (three of which were in full breeding plumage) and the addition of three Lesser Black-backed Gulls to the local collection of American Herring and Ring-billed Gulls. But it was Glen Davis who was to have the luck today - though a handful of us were lucky enough to share his finds. Driving through the streets of Cape May Point, Glen spotted a Pileated Woodpecker which crossed the road in front of him. Within seconds he had alerted me to the bird and, just a few minutes later, I caught sight of this magical bird as it rose high above the houses. As always seems to be the case on such occasions, my camera's autofocus decided to have an off day and I singularly failed to record the moment. Glen returned shortly after and together we watched the bird sneak back across the road (I got a perfectly-focused photo of telephone wires with a mysterious smudgy blob in the middle) and disappear behind the houses. The bird was later seen by one or two observers near Lighthouse Pond at the state park and later still at The Beanery. Maybe it will be around tomorrow. Being out in the field for Cape May SpringWatch had paid off - and we were shortly to be rewarded again when Glen spotted a Sandhill Crane cruising slowly away from us. It's unclear where this bird had suddenly come from, but it seems likely that it had arrived from the north, spotted the bay ahead and decided to turn back the way it had come.

Quite a start to the day and a clear sign that birds are really on the move in our area now. I rounded off the day with a Louisiana Waterthrush singing in woods on the east side of Lighthouse Avenue around 7PM. It then came into the Northwood Center woods and called for a short while before flying back across the road again. A pretty typical date for this species and a sign that Belleplain State Forest will seen be busy with breeding warblers. The two Tundra Swans that had been hanging out at the Plover Ponds also seem to be getting itchy feet as they flew north over the Northwood Center this evening, yapping like small dogs. Every moment in the field counts from now on - it's time to get out and get recording, logging your observations for the future and helping us build a better picture of what our birds are up to. 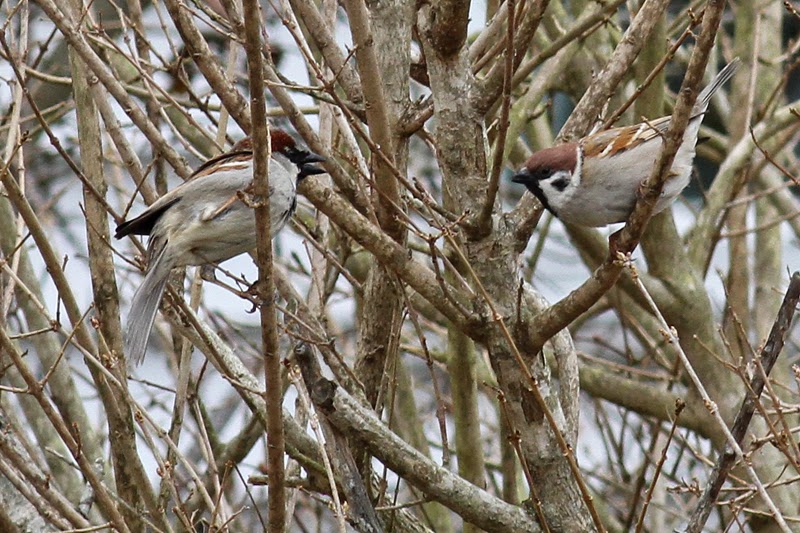 After an absence long enough to make most of us feel that it had moved on, the Eurasian Tree Sparrow turned up at the Cape May Point feeders again on Saturday and continued to spend time on Harvard Avenue today [photo by Mike Crewe]. 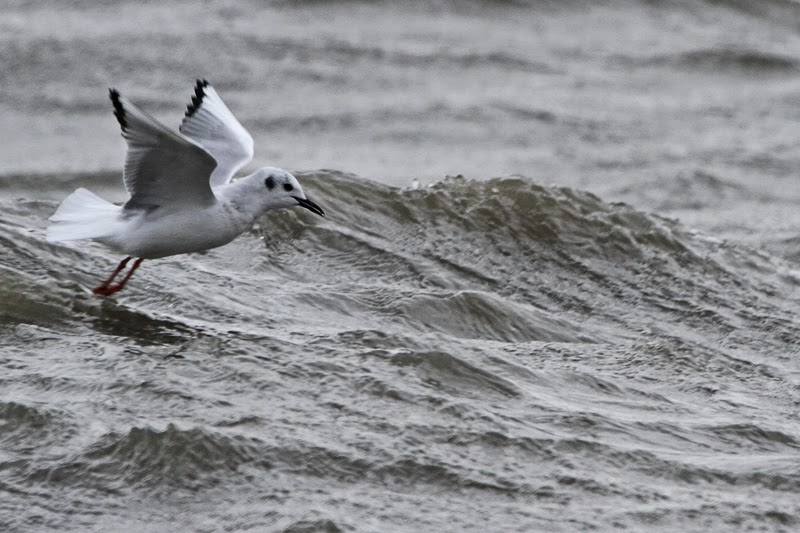 Out with the old - dainty Bonaparte's Gulls can be seen skipping along the wave tops as they head north up the Delaware Bay now. These birds have wintered with us and are now beginning their journey northward to the boreal forests of Canada to breed [photo by Mike Crewe]. 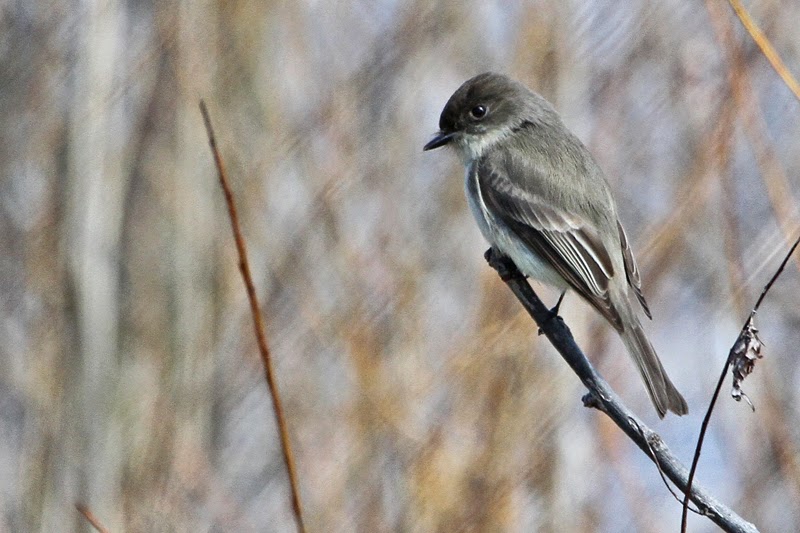 In with the new - having wintered in milder climes to the south, Eastern Phoebes are now returning to breed with us. Look for them along open field edges such as at Higbee Beach, The Beanery or Cox Hall Creek WMA [photo by Mike Crewe]. 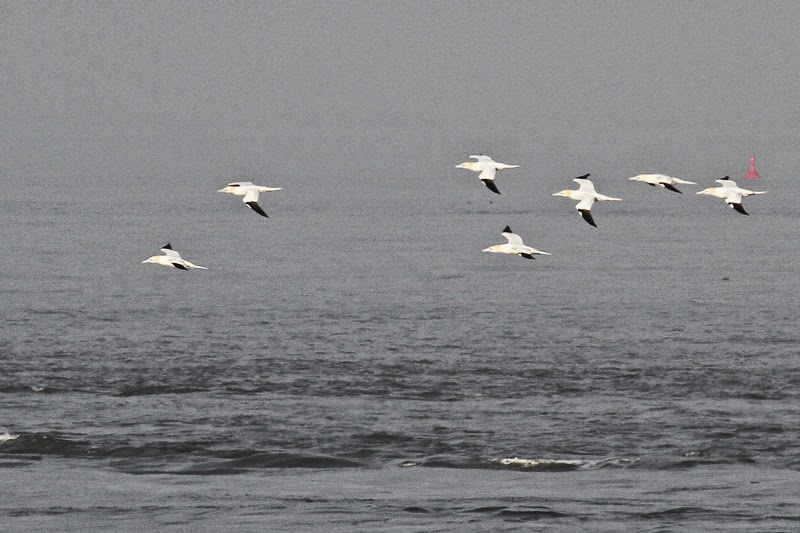 Northern Gannet numbers have yet to really get going this year - perhaps the cold winter had pushed them further south than usual. But a few are passing through the bay now and the gray backdrop of Saturday morning's foggy start set them off a treat [photo by Mike Crewe]. 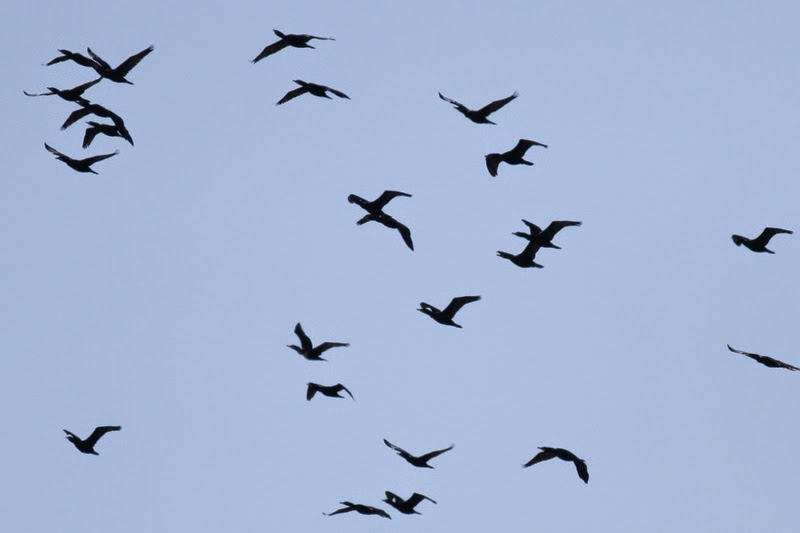 Famous for never being able to keep a straight line for long, packs of Double-crested Cormorants are now trickling in over Cape May Point. This trickle will become a flood pretty soon and this species is a real icon of visible migration along the eastern seaboard [photo by Mike Crewe]. 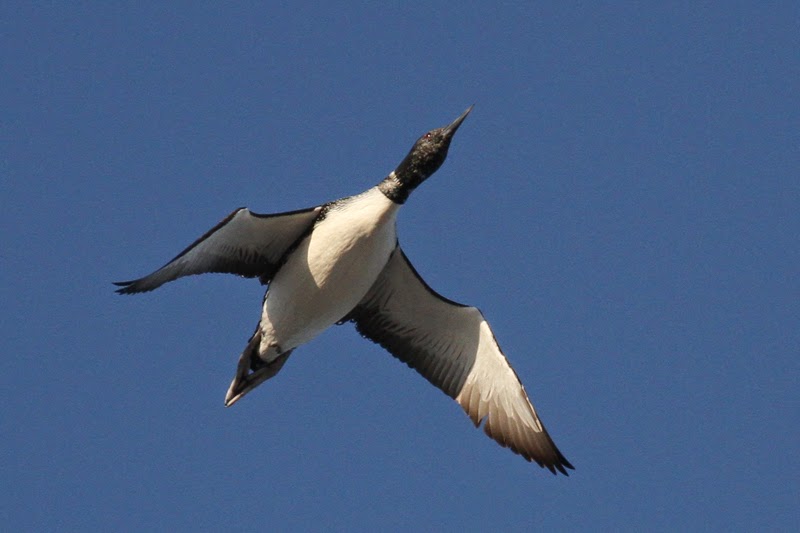 Another iconic sight of spring in Cape May - breeding-plumaged Common Loons heading due north over the rooftops! [Photo by Mike Crewe] 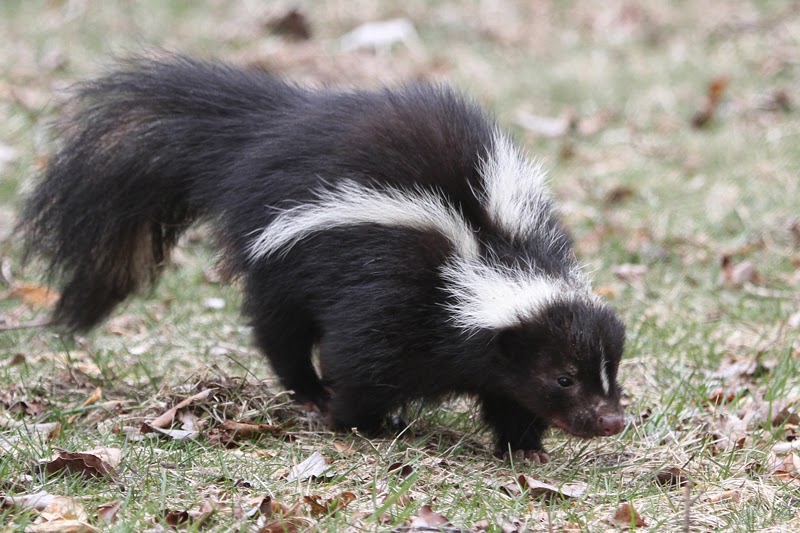 And it's not just birds that are stirring from the winter doldrums. This Striped Skunk was ambling along looking for a good meal near Lake Lily a few days ago - you need a peg for the nose to get close shots of these guys.... [photo by Mike Crewe].
Posted by Mike Crewe at 9:18 PM