Acquiring the Colors of Spring

In the natural world, spring brings with it many things - warmth, lushness, regeneration and - often - rich colors. We are all used to seeing somewhat drab-looking birds in spring, that miraculously become bright and colorful in spring, ready for the forthcoming breeding season. How do they do this? Well, this very subject came to mind with me recently when Jim Cremer brought two dead Eastern Bluebirds into the Northwood Center. While such an event is of course tinged with sadness for the two bluebirds, it does give a rare opportunity to study birds closer and to learn more about them. I studied two things on the two bluebirds - the transition from non-breeding to breeding plumage and the difference between first-year and older birds. I'll cover the latter subject at a later date, but acquiring the colors of spring is what we will look at here.

Birds are an amazing study in evolutionary processes. To be able to fly, they need to be as light as possible, while still covering all the other essentials of life - breeding, keeping warm, staying alive! They have developed feathers which are very light and open structured, yet keep them warm. These feathers have then evolved to serve as seasonal queues to each other - a male in full breeding plumage says to another male 'stay off my patch' and says to a female 'I'm fit and well and able to support a family'. But there's a pay off; feathers are relatively weak, so damage and wear out relatively easily compared with the fur of mammals or the harder skin coverings of reptiles. To compensate for this, birds molt - switch out their old feathers for new ones.

Now molting is of course expensive in terms of energy costs, so if a bird can make its feathers last as long as possible that's certainly beneficial. So some birds have evolved a trick that allows them to come into breeding plumage without actually molting - something known as acquiring plumage by abrasion. Put simply, the tips of the feathers wear away due to simply rubbing against vegetation or the rough and tumble of winter weather, to reveal a different color underneath. Other birds seem to get by with a molt over the late winter and spring period - so how do we tell which species does which. Here's where the bluebirds come in, along with some other pointers for you to look out for: 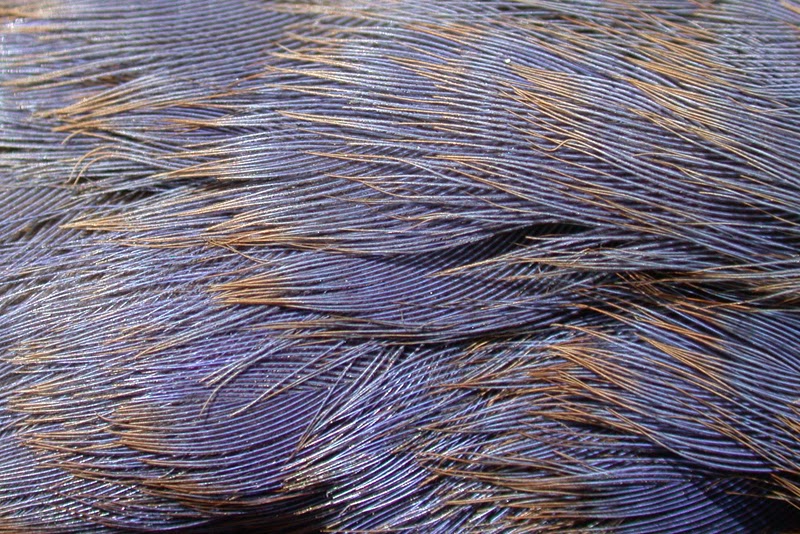 A close up photo of the feathers on the mantle of an Eastern Bluebird reveals blue feathers with dusky, brownish tips. In winter, these brownish tips are extensive and overlap, in some individuals almost completely masking the blue underneath. As the season progresses, these loose, open tips gradually wear away to reveal the glorious blue - and hence the bird comes into breeding plumage without having to molt [photo by Mike Crewe]. 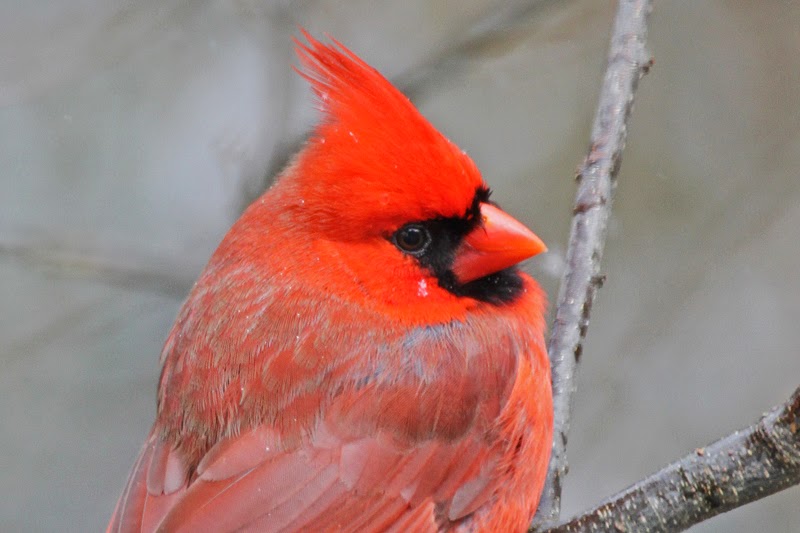 In the field, it is possible to see this dusky-fringed effect and thus work out which species use this process. The Northern Cardinal is a classic example, as seen here. Note the gray fringes to the mantle feathers; earlier in the winter these fringes can be much more extensive than on this bird, which was photographed in late winter [photo by Mike Crewe]. 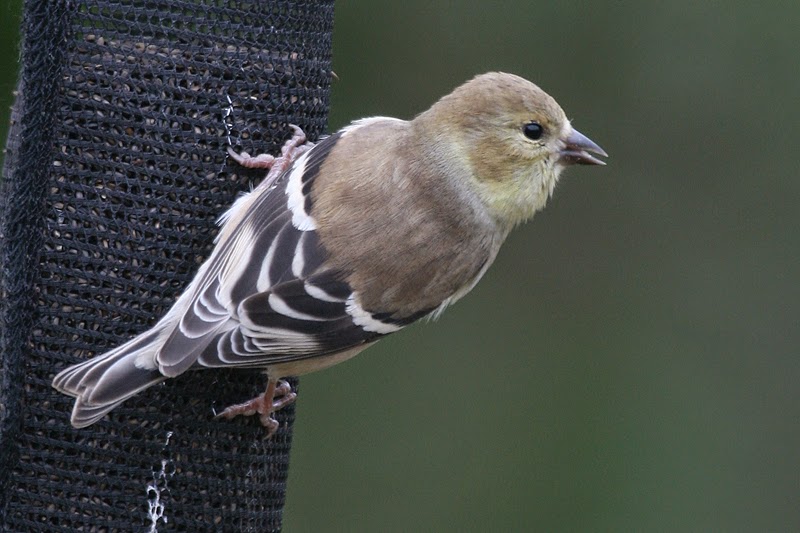 The alternative to acquiring breeding plumage by abrasion is to feed up well and go through two molts a year (pretty much all birds go through one full molt a year at least, usually in late summer after the stress of the breeding season). So how do we tell these birds from the abrasion ones? American Goldfinch is a classic example of an easily-studied species that acquires breeding plumage by molt. Here's a typical, rather drab-looking goldfinch in winter [photo by Mike Crewe]. By late winter/early spring, you will start to see some American Goldfinches looking like this. This male goldfinch is gradually replacing the brown of winter with the gold of summer and the result is not a bird with neat, regular patterning, but a rather blotchy looking individual with a mix of the two plumage colors [photo by Mike Crewe]. 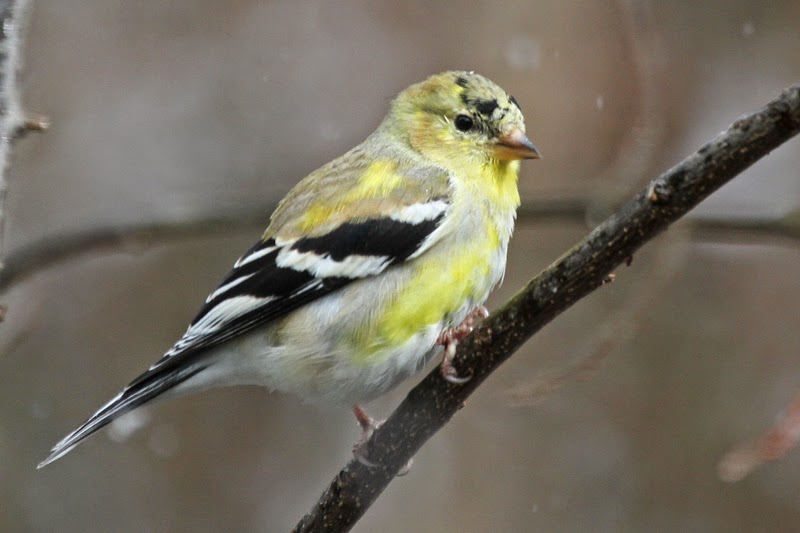 A little further into spring and we can see a male American Goldfinch emerging - the black cap is starting to show now and yellow is coming on the underparts [photo by Mike Crewe]. 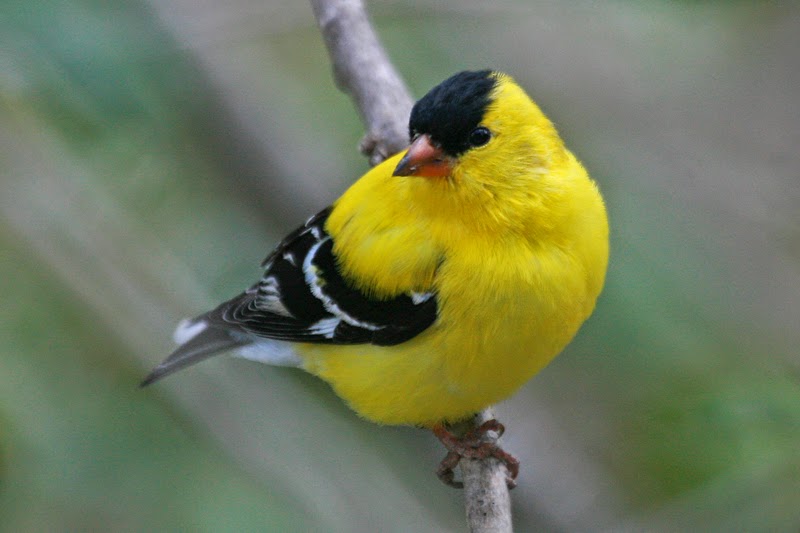 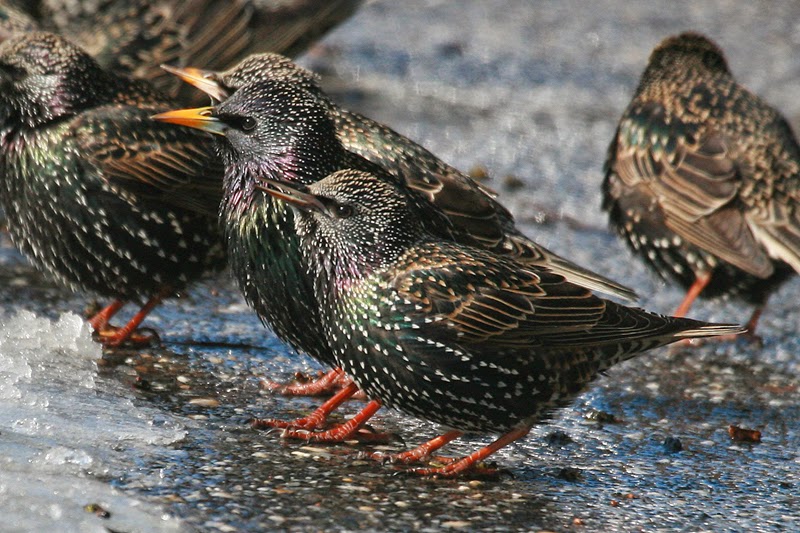 Another common bird that acquires breeding plumage by abrasion is the European Starling. These spangled winter birds will lose those white tips and turn into mostly black birds with glossy green and purple reflections. One other change that takes place in many birds is a change in bill color. Note here that the front bird (sexed as a female by the pale eyering) still has a dark bill, while the two behind have yellow bills, indicative of breeding condition. Though hard to see on this reduced, web version, you might just notice that the nearer bird has a bluish base to its yellow bill, indicating a male, while the bird behind has the pink base of a female [photo by Mike Crewe].

If you still have your back yard feeders out, check out the species that come in regularly and see if you can tell the abraders from the molters as spring progresses!
Posted by Mike Crewe at 1:45 PM