Spring colors and those bluebirds...

Back on April 12th, I mentioned the two male Eastern Bluebirds that had been brought in to the Northwood Center recently, and they inspired the post on how birds acquire their breeding plumage using various methods. These two bluebirds also gave me an opportunity to study how birds can be aged in the hand because, by chance, they happened to be an adult and a first-year bird.

Molt, plumages and all that associated stuff is a pretty turgid subject and, if you want my humble opinion, the subject has been made far harder by the 'boffins' than it really needs to be - at least for most of us. So I'll do my best to keep it simple, but forgive me if it gets a bit convoluted and by all means take your binoculars for a walk half way through if you feel the need!

For a variety of reasons, many bird species do not acquire the full-on plumages of adulthood straight away, but tend to build up to it slowly. This is especially noticeable in some of the larger, longer-lived birds such as birds of prey and gulls. There seems to be a pretty obvious set of reasons for this, revolving around the fact that it can take a long time to learn to be good at your craft. This is especially the case with hawks and eagles; there's a lot of skill involved in being able to catch enough food to feed yourself, let alone a whole family of youngsters. So, when the mating season begins, those accomplished adults will be sporting smart and attractive plumages, indicating that they are fit, have done the apprenticeship and are ready to bring up a family. A young bird, in perhaps its second-calendar year, will be recognized as something of a beginner by its plumage and will be far less likely to attract a mate. It's a bit like being a teenager... So young birds can spend the summer practising feeding themselves and not worrying about the stress of maintaining a territory. Indeed, in most migratory species, the sub-adult birds often stay down on the wintering grounds through the first summer and don't even bother to come north. 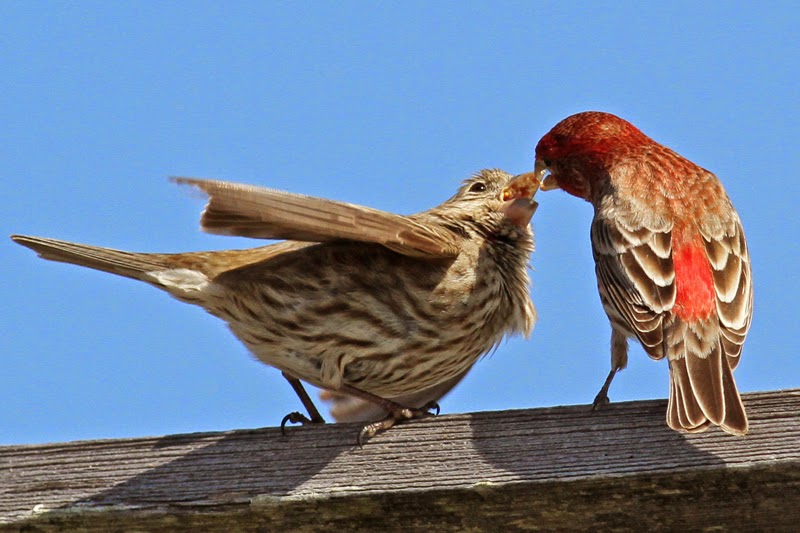 Proving yourself worthy of the job. Many bird species go through often quite elaborate pair bonding procedures which not only help to break down any potentially harmful natural instincts (important in predators especially!) but which also - as in the case with these House Finches at the Hawkwatch Platform this week - help to demonstrate the male's ability to provide for the family. If you see a bird feeding a 'baby' this early in the year, chances are it's actually the male feeding his mate [photo by Mike Crewe].

One other useful thing that a duller, sub-adult plumage does is that it signals to territorial, adult males, that you are not likely to be a threat to them and won't be trying to steal their territories (or wives!) from them. This is especially the case in species like Bald Eagles, where last year's (still brown) youngsters are tolerated in the territory while this year's youngsters are being raised.

Songbirds are a little different to the examples given above in that they generally don't live as long, so the whole process needs to be speeded up. In the most extreme cases, the vast majority of individuals of a species will die after the rigors of breeding leaving the year's youngsters to continue the species. This was highlighted to me when I was banding at a coastal observatory in the UK and we found that the overwhelming majority of Goldcrests that we caught as they migrated south in the autumn from Northern Europe were juveniles. So songbirds (or passerines) generally acquire their full adult plumages sooner than the bigger non-passerines, yet there are still clues in most of them that help us to tell the age of the bird. Most of the clues relate to subtle color shades and to shape of feather tips. Here's a sequence of photos of the two male bluebirds that illustrate points that work for many songbird species. 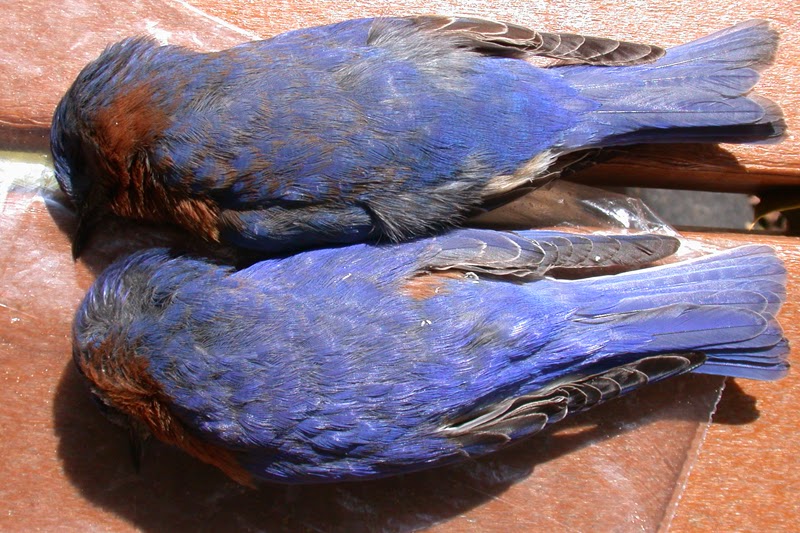 Looking at our two unfortunate bluebirds, there's not too much obviously different between them and it is generally the training given while learning to be a bander that allows the subtle clues to be picked up [photo by Mike Crewe]. 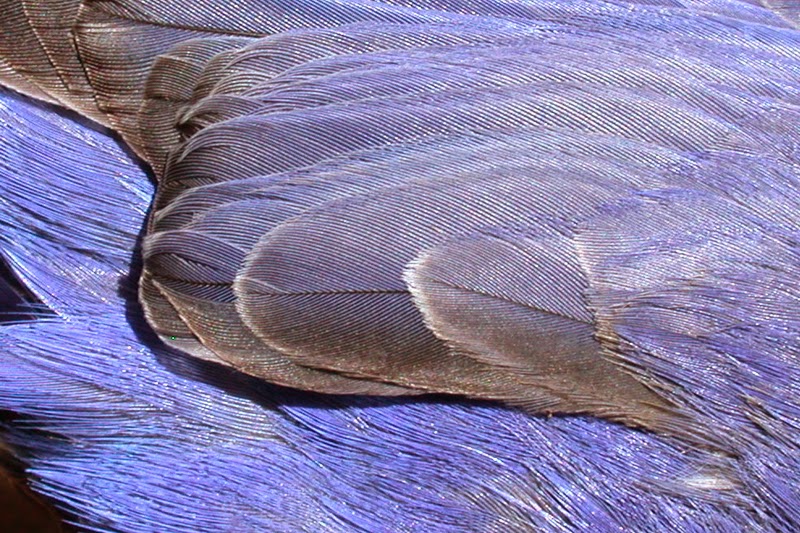 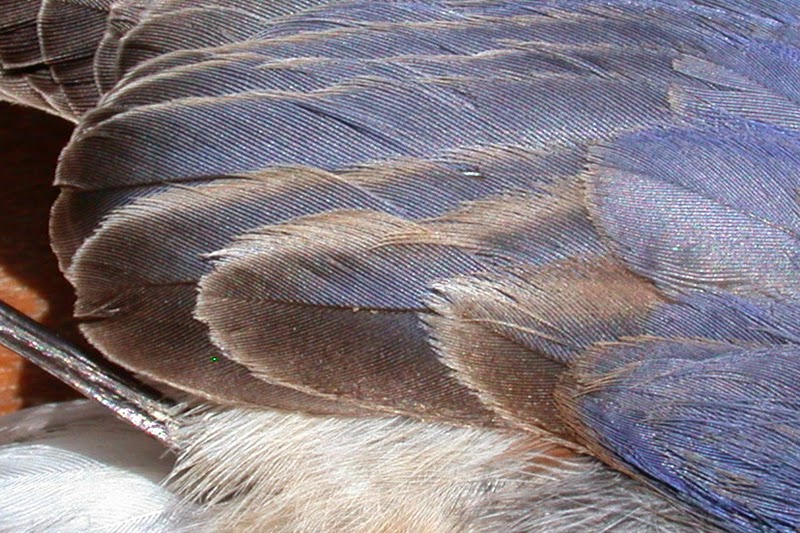 I'll present the photos in pairs, the upper photo showing the adult, the lower photo showing the first-year (or second calendar year if you prefer). These photos show the tertials - so called because there are three of them and they form the third set of clearly differentiated flight feathers in the wing (the sequence goes primary, secondary, tertial). Notice how, in the bird below, these feathers have much broader, paler edges and tips to them, while the shade of blue is just a little more subdued [photos by Mike Crewe]. 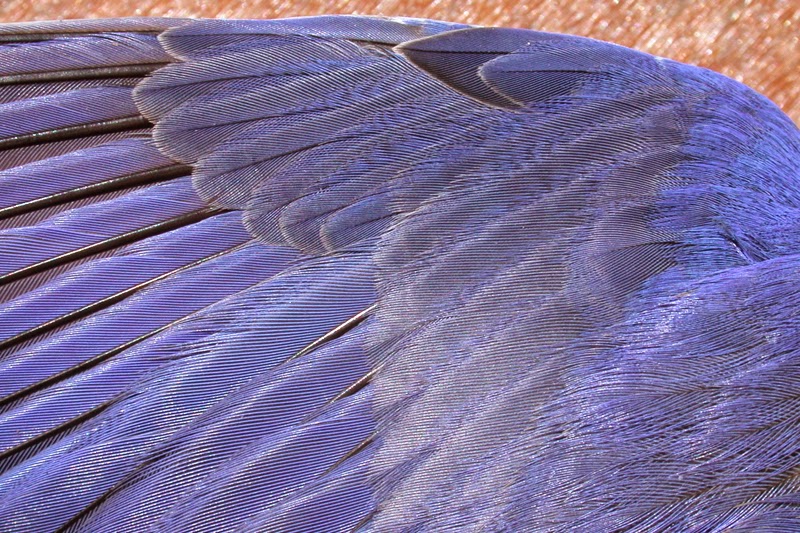 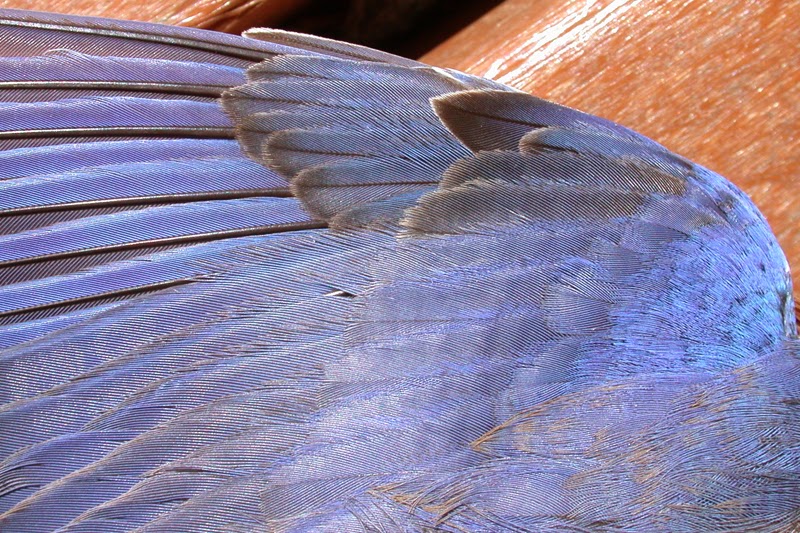 These photos show the greater coverts (running more or less vertically up through the middle of the photo from the bottom) and the primary coverts (above the greater coverts in the photo). In the lower photo, notice that the primary coverts are clearly darker-tipped. More interestingly, notice that the two outermost (top two) greater coverts in the lower photo are duller and grayer than the rest of the coverts. This is because, to save a little energy, many young songbirds don't molt those coverts that sit beneath all the others - and thus get less wear. They will be good for another season. This gives us an easy opportunity to look for this 'molt limit' and use it as a way to tell the age of the bird [photos by Mike Crewe]. 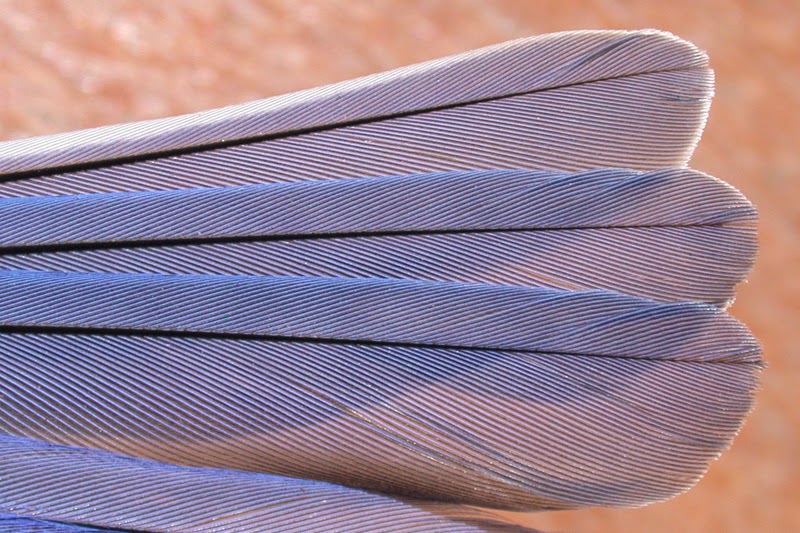 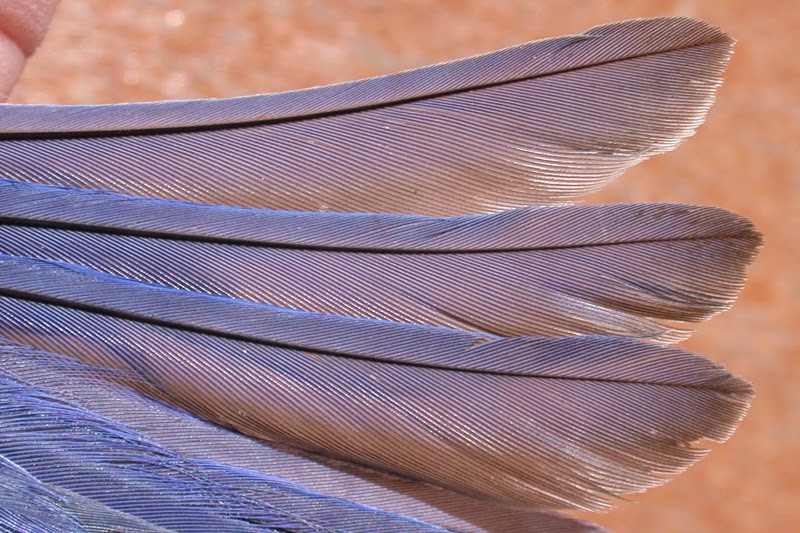 Right outer three tail feathers of adult and first-year Eastern Bluebirds. When it comes to tail feathers, it's not the color so much as the shape which helps us to determine the bird's age. Notice that the adult feathers above are generally broader and have neater, more broadly rounded tips. In these examples, the young bird below also shows duller, grayer inner webs, while the adult sports a sharp, white line along the outer edge of the outermost feather [photos by Mike Crewe].

Though much of this detail in subtle and difficult to see in the field, the power of digital photography is opening up all sorts of new opportunities. Zoom in on those spring birds in your yard and see if you can work out what is going on out there! 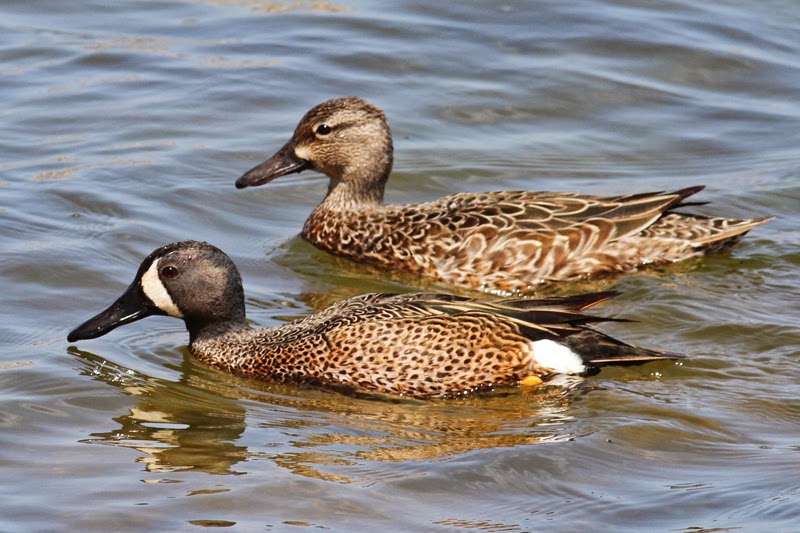 Ready for summer - spiffy birds are all around us at Cape May right now! This pair of Blue-winged Teals has already graced several of our recent walks and given many walk participants an unusual opportunity to get up close and personal with a species that is normally much harder to approach [photo by Mike Crewe].
Posted by Mike Crewe at 4:47 PM