The 2014 season at the point has begun

As the sun rose over Cape May Point today, it shone on a new set of faces at the Hawkwatch Platform; daybreak saw Mary Raikes take the stand, and so began the 2014 Cape May Hawkwatch. Many other familiar faces were present today - friends old and new, here to see in the start of another season, and to begin the sortie into the wonderful unknown of a Cape May migration. We welcome you all to come and say 'Hi' to this year's seasonal interpretive naturalists too - Margeaux and Jordan join a returning Emily on the platform, while Lindsey and Angela will be working on the Monarch Monitoring Project. All the team are here, the season has started - the fun has begun!

And it was certainly a great day to be at the Hawkwatch today; hot southerly winds and high humidity were not typically indicative of a good day for birding at this time of year, but a nice scattering of warblers and other songbirds around the point first thing ensured there was plenty to see to start the day. The American Golden Plover that has been zipping around the point for the past couple of days, finally settled for much of the morning on Bunker Pond, giving us at least something to look at there, but attentions were mostly drawn to a light trickle of other shorebirds as small flocks came westward past the Hawkwatch. Few migrant raptors showed up to really underline the first day of the count, but Northern Harrier and Peregrine Falcon totals got off to a start, and casual sightings of adult and juvenile Bald Eagles at least gave visitors some thrilling moments.

Temperatures in the high eighties continued through the day and, as threatening storm clouds accended to magnificent heights to the west, Tom Reed pulled the star bird out of the bag when a juvenile Long-tailed Jaeger cruised casually right across the pond and past the platform. Such species often migrate high overland, cutting down from the Arctic via the Great Lakes then heading cross-country to hit the east coast by following a river valley down stream. Such high-flying birds could easily be dropped down by the sudden appearance of adverse weather and it is perhaps no coincidence that a heavy shower of rain passed through not long after the jaeger had disappeared behind the lighthouse.

A walk of the Cape May Point beaches revealed an excellent number of roosting gulls and terns on the rapidly emptying beaches now; time spent here could certainly pay dividends for anyone looking for something unusual in the gull or tern line. As if all this activity were not enough, Jesse Amesbury rounded the day off nicely by finding a Clay-colored Sparrow feeding along the dune ridge beside the plover ponds, then a small gathering paid homage to The Meadows and enjoyed great views of a feeding Sora and a singing Marsh Wren. My day began with the first Yellow-bellied Flycatcher for our yard list and finished with parties of Bobolinks spiraling up out of the marshes and a swirling mass of some 200 Eastern Kingbirds hawking insects against a setting sun.

It has been quite a day around the point, with certainly something for everyone. There's plenty more to come, and we'll be out there enjoying it - come and join us! 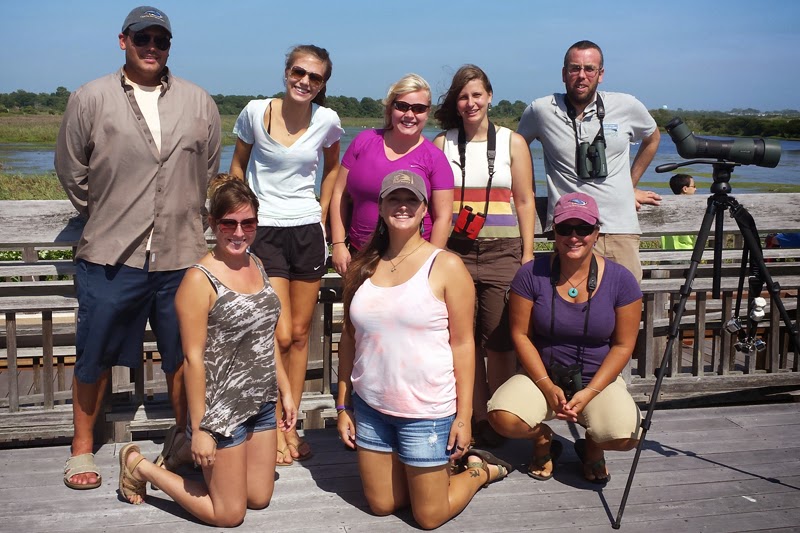 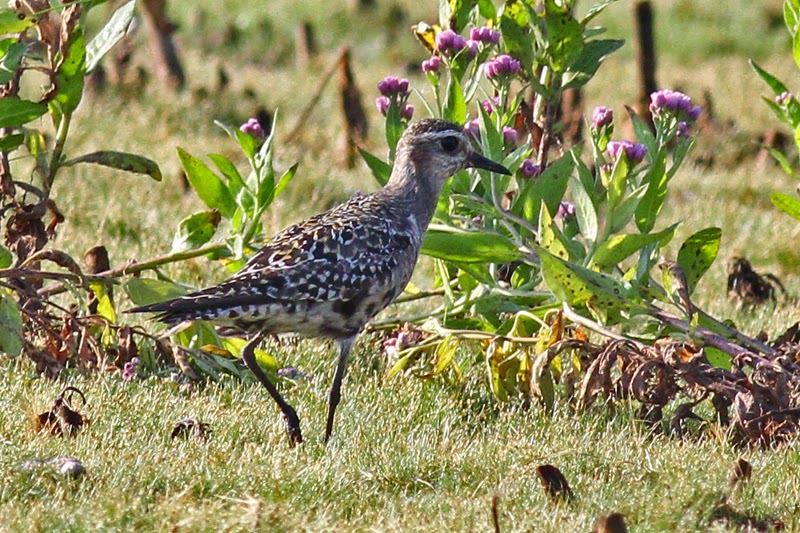 A great way to start the day - American Golden Plover at The Meadows. This adult bird shows a typically patchy appearance at this time of year, as the black belly feathers of breeding plumage are replaced by the paler feathers of non-breeding plumage [photo by Mike Crewe]. 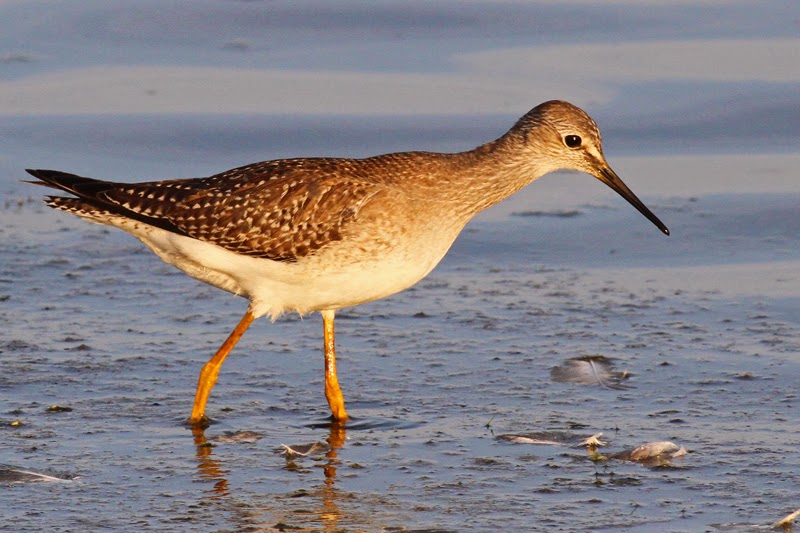 In contrast to the adult plover above, this juvenile Lesser Yellowlegs at the plover ponds looks very dapper in its neat, spangled plumage [photo by Mike Crewe]. 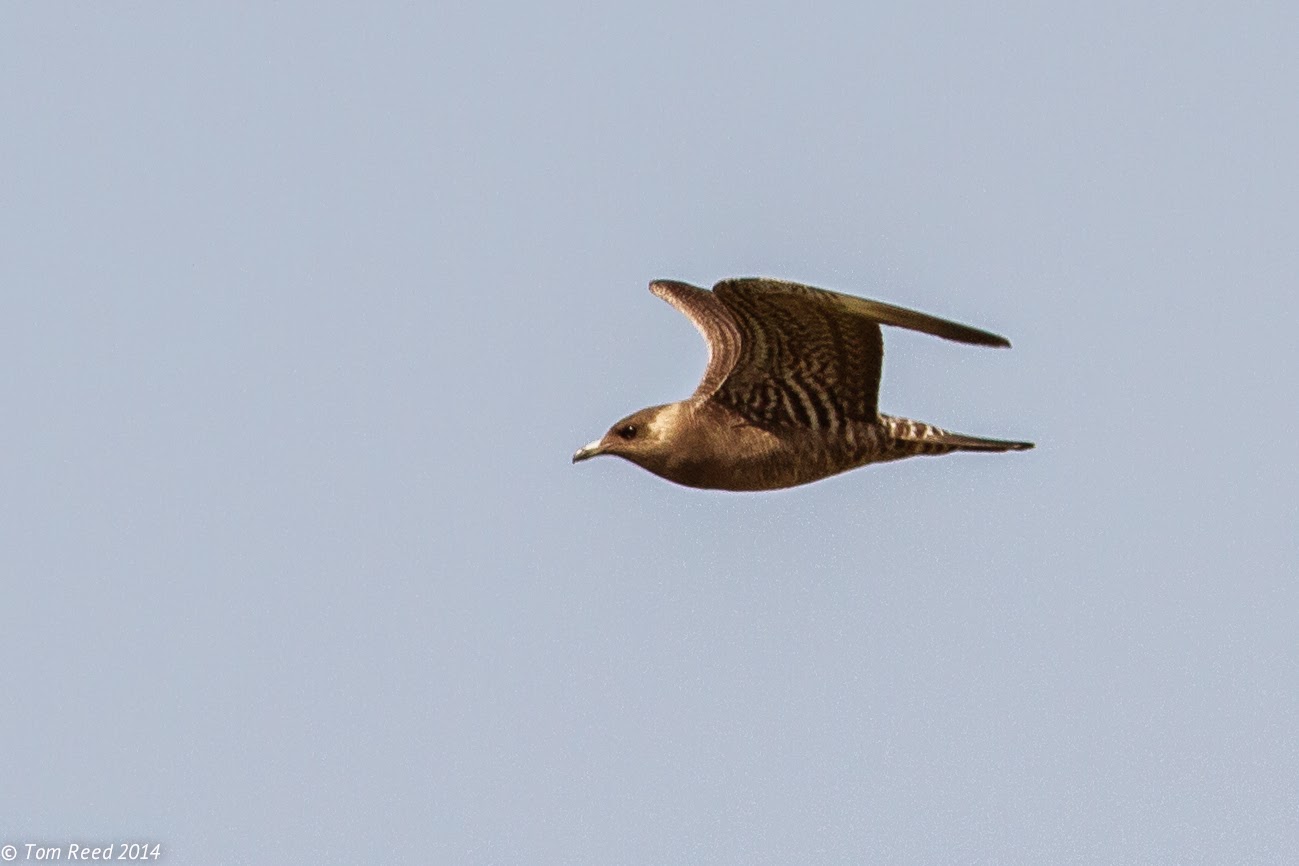 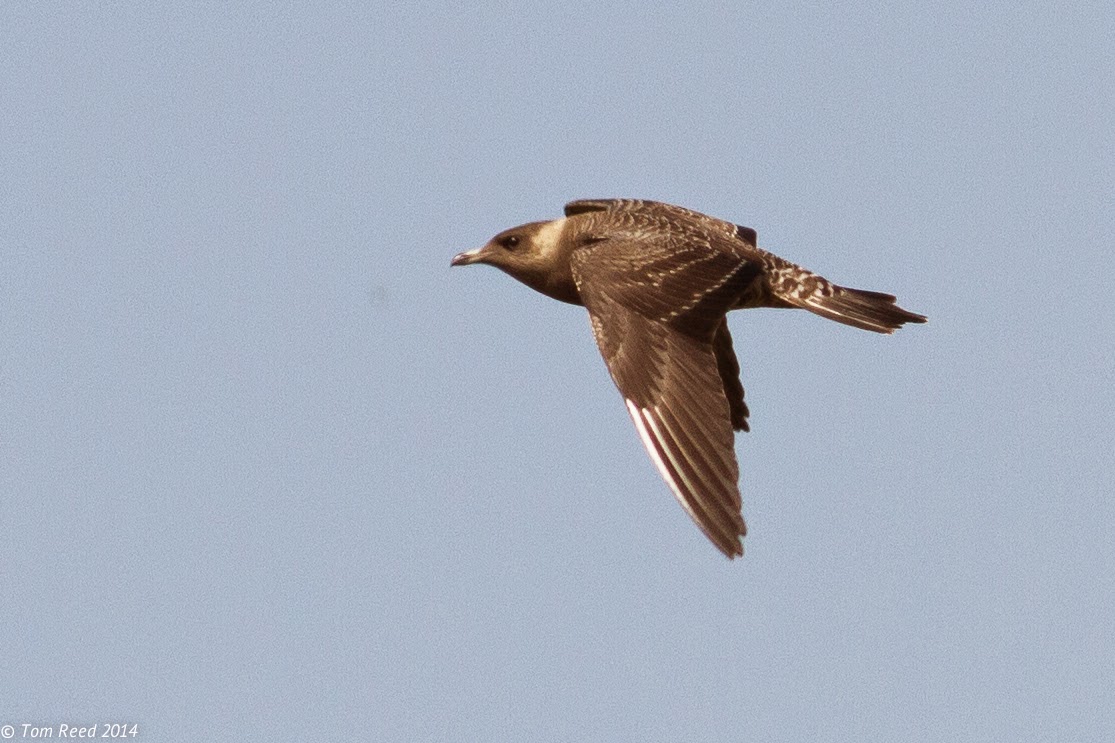 Shock bird of the day - this juvenile Long-tailed Jaeger took a few spins around the state park today before heading off behind the Cape May lighthouse. Note the relatively small, bi-colored bill, the clearly defined pale spotting on the upperparts and the relatively small amount of white on the upper wing, confined to just the outer two to three primary shafts [photos by Tom Reed]. 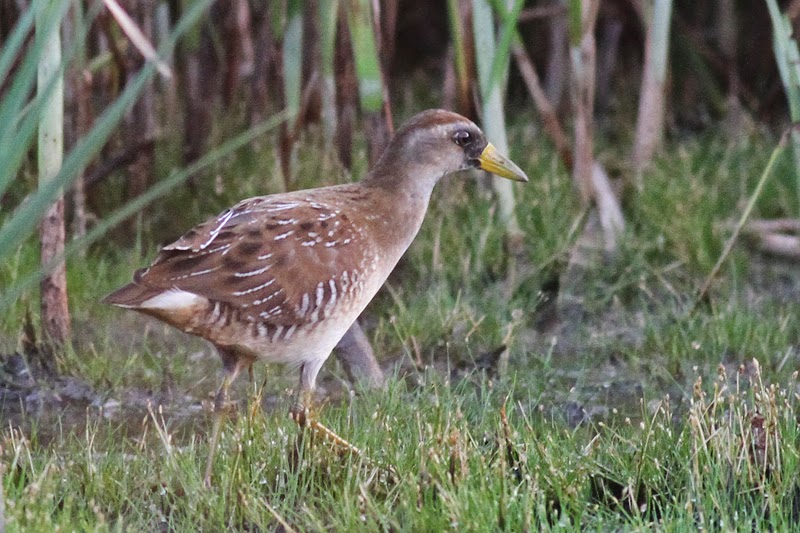 The Meadows will be coming into their own as a great location to look for Soras over the coming weeks. This adult bird with its gray neck and black face mask has been hanging out there for the past few days and showed very well this evening [photo by Mike Crewe]. 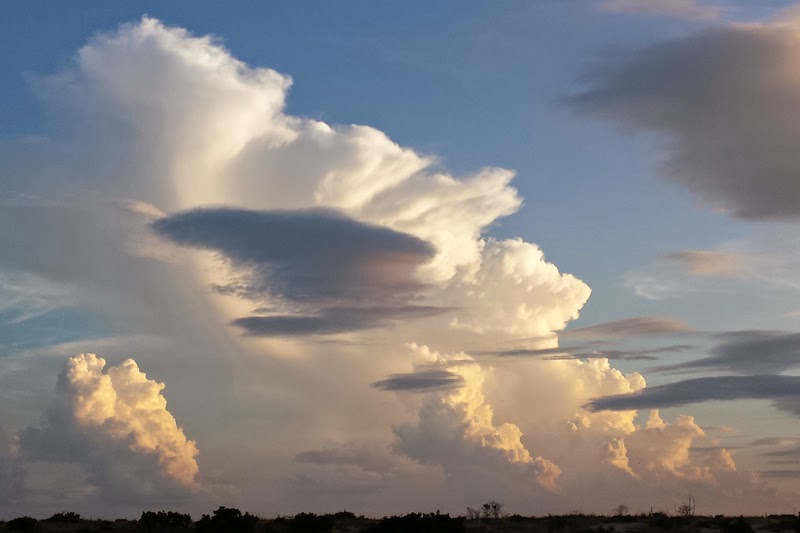 Spectacular storm clouds are stained orange by the setting sun over Delaware Bay - unsettled weather could provide us with some very interesting birding over the coming days [photo by Mike Crewe].
Posted by Mike Crewe at 10:44 PM