When the Whiskered Tern showed up at Cape May Point on September 12th, we were ecstatic; a fabulous bird to see and enjoy - and clearly a bird that was going to be the star prize for the autumn. Only the third record ever for North America, it was high on the wanted list for us newcomers, as the species had been seen in Cape May before.

Roll forward to September 27th and there was suddenly competition for 'bird of the year'; a Zone-tailed Hawk passed through our air space. Better than the Whiskered Tern from a local perspective, as it was a first record for New Jersey - but not as good as the tern in that it breezed right on through and didn't pay proper dues to all who would have loved to have been there.

Could this amazing run of staggeringly good birds continue and see Cape May go 'triple platinum'? After the temptation of a Common Raven (a common bird, but rare in Cape May, this being the first here for quite a number of years), there was a brief respite, but patience paid off. Richard Crossley did the birding community an enormous favor this morning by having far too much on his mind and turning left instead of right on his morning coffee run. This took him up past the Rea Farm fields on the intersection of Stevens Street and Bayshore Road. Fate is a funny old thing sometimes and Richard's tiny slip resulted in him finding a Vermilion Flycatcher, perched all perky atop a nearby shrub. As I write, the bird is still performing for a steady trickle of admirers as it feeds around the area just north-east of the Rea Family farm stand and to the east of the main pond there.

A male Vermilion Flycatcher was found at the Wetlands Institute at Stone Harbor in May 2003, so those of us that missed that bird have had a long wait to plug a gap in our lists. But the wait was well worth it. This constitutes only the second record for New Jersey, though there has been a handful of records of this species throughout the north-eastern US over the years. The species is widespread and common from Mexico south well down into south-central Argentina and extends northward across the border into the southern and south-westernmost corner of the US. Despite being common in its natural range, this is such a stunning bird that it is always a phenomenal species to see. Let's hope it decides to stay for a few days - we'll keep you posted via our Twitter feed.

Though rare birds are not the first priority when it comes to conservation, wandering migrants during the fall are prone to the same weather displacements as other birds. As large numbers of tired and hungry migrants descend on Cape May - through a chance combination of weather and geographic influences - we should all be grateful of sites such as the Rea Farm, that remain as islands of prime habitat amid a slowly creeping sea of development. Hopefully we can continue to support legislation and funding that allows for such places to be preserved. Migrants not only need safe breeding and wintering grounds, they need safe migration stop-overs too. 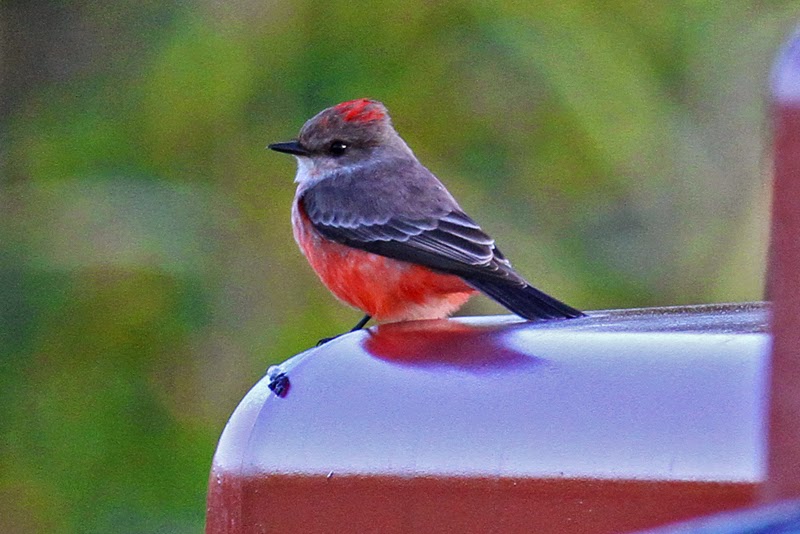 Male Vermilion Flycatcher at the Rea Farm today. The white throat and largely gray crown show this to be a hatch-year bird who is certainly a long way from home [photo by Mike Crewe].
Posted by Mike Crewe at 2:35 PM