As an unseasonably early cold snap sweeps across Cape May and brings a host of avian goodies our way, the nay-sayers are having a field day. Five feet of snow recently dumped itself on the unfortunate residents of Buffalo, NY and the term "Global Warming" comes under attack yet again. Unfortunately this term, which served a purpose when first coined, has given the nay-sayers much opportunity to deny the facts - and that's just what happens if you hang desperately onto a single piece of the jigsaw and ignore all the other pieces. And that's especially a problem when that single piece is, even as I write, tumbling inexorably off the dining room table and heading for the dusty spider web under the book case.

Science and understanding is about research, and research is best understood when each project is part of a much broader picture. Global warming over time is happening and is demonstrable; and yes, it has happened before, but right now, it appears to be happening faster than ever before - so we need to understand why that might be. The best way to do that is not to go join the spiders under the book case, but to hang on to pieces of the jigsaw that are firmly on the table. Long-term projects such as the British Trust for Ornithology's Integrated Population Monitoring program don't just look at a single facet of bird life, they take all the pieces and put them together. Though long term, scientific projects such as Constant Effort Sites, Wetland Bird Survey and the Nest Record Scheme are used, much of the work they use comes from citizen science data. The basic bird records and sightings that come from people's daily observations, their notebooks and local survey projects. These can then be tied in and compared with data from other projects; from longer-term, focused surveys with more rigid methodologies to help provide us with the facts - and to help to question all of it, such that we can be as certain as is possible that we have the right answers. And if we don't like the answers, well, ignoring them or denying them does not alter facts.

As an interesting example of how an integrated program means that we can gain the facts more effectively, we can scour academia for projects that might not be immediately apparent. A recent paper with the title of Temporal patterns of avian body size reflect linear size responses to broadscale environmental change over the last 50 years was probably discussed at far fewer family breakfast tables than the news story of the Buffalo snowfall, yet it gives us a much better insight into what is really going on. Who would have thought that measurable reductions in bird size were taking place over time on at least three continents around the world? Such reductions in size are consistent with local climate change over time. How do we know? Well, all such academic studies start with data gathering and that can come come from a variety of sources and a significant source of such data is the daily recording and logging of your local birds.

Let's all be a part of this - it is truly fabulous that we can go out and enjoy our birds, record what we see and leave academia to do the boring backroom stuff. Enjoy your birds, but record and report what you see - be a part of making a difference! 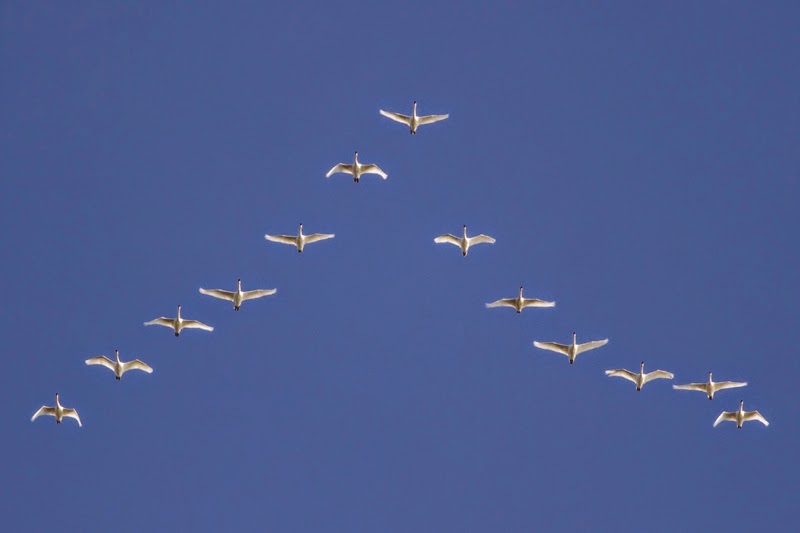 High on the list of indications that cold weather was heading our way was the recent run of Tundra Swan sightings. These impressive Arctic visitors seldom spend the winter with us, but pass through on migration and can be a highlight of any cold day in late fall or early winter here. An exceptional (in recent years at least) count of over 70 birds was on Bunker Pond on November 20th, while the birds in this picture were passing over the Avalon Seawatch. Where are they going and where did they come from? Answering such questions will give us an insight into the lives of these birds, while recording over time will show if population numbers change, or choose different migration routes and wintering grounds [photo by Sam Galick]. 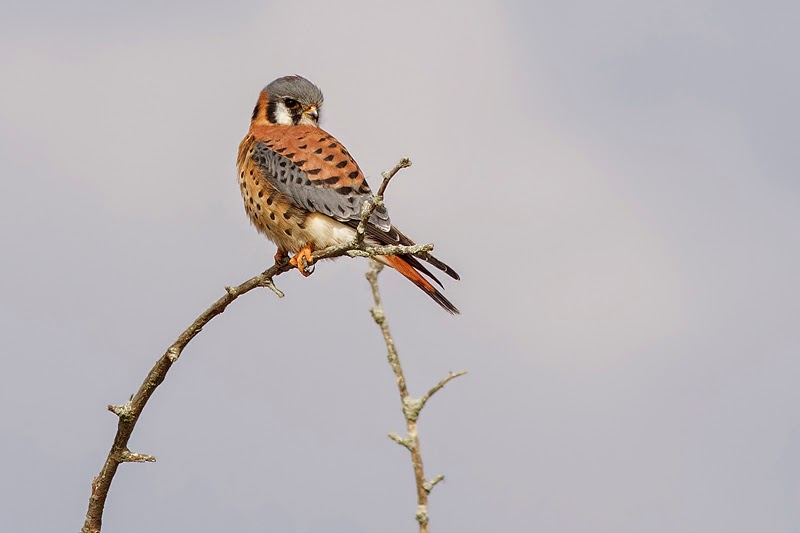 In the summer, American Kestrels feed largely on sizable insects such as crickets and grasshoppers, so how do small numbers of kestrels manage to survive the winter here, when such prey items are not available? Studies have shown that they switch to feeding more on small birds and rodents - but will this change if the climate changes? Can careful monitoring of winter distributions of kestrels and recording of prey items offer inferences about climate change? If we don't do the work, we won't know [photo by Sam Galick]. 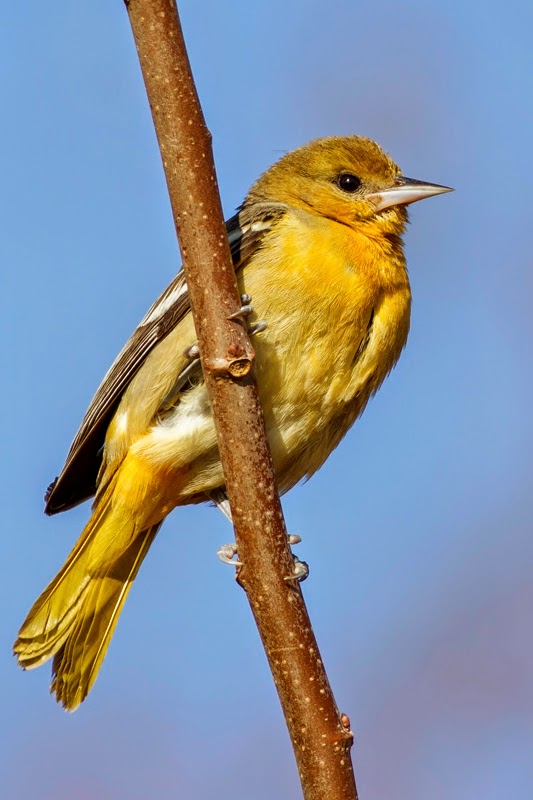 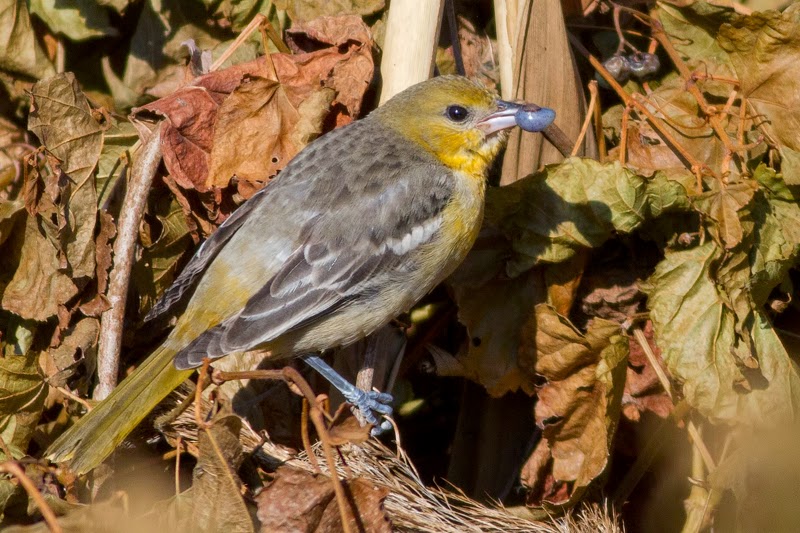 Baltimore Orioles are common migrants at Cape May, but there seems to be a peculiar trend in sightings; birds pass through in good numbers during September and October, but then there is something of a hiatus before another run of birds takes place in late November and December. Where have these birds come from and where are they going? Perhaps long-term banding projects at a large enough number of locations can answer this. These two birds are currently chomping on Porcelainberry at The Beanery [photo by Sam Galick] 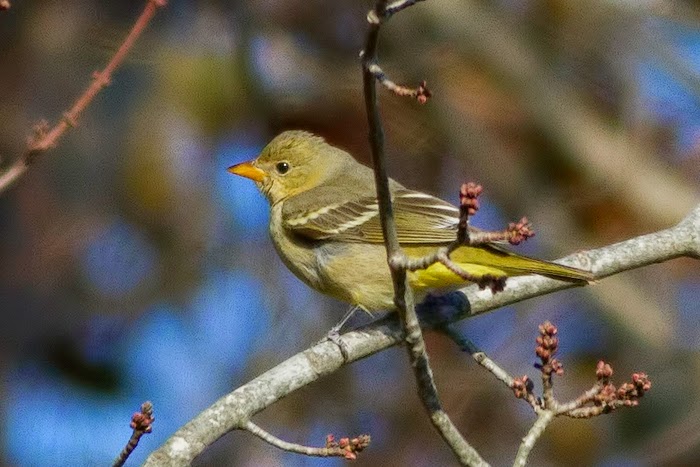 Western breeding species regularly show up on the east coast in late fall - this Western Tanager turned up at The Beanery yesterday and continues there today, feeding on Porcelainberries with a group of Baltimore Orioles. Such spacial patterns of dispersal were once thought to involve 'lost' birds that were not worthy of study, but such limited views deny us the opportunity to discover whether this is indeed the case. Careful recording and tracking of vagrants can be one piece of the jigsaw in monitoring changes in bird distributions - some of which might easily be due to climate change [photo by Sam Galick] 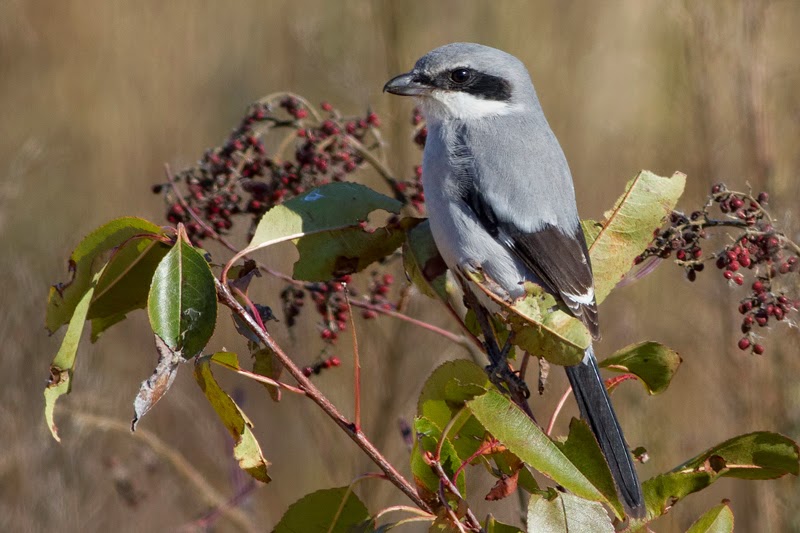 Although this Loggerhead Shrike has been present at Corbin City Impoundments since at least October 8th, it's taken time for it to come close enough to the trail such that good photos can be achieved. At a distance, Loggerhead and Northern Shrike can be hard to differentiate and this bird bounced back and forth for a while. At close quarters, the lack of visible scaling on the underparts, lack of white supercilium and relatively short primary projection all support the identification as Loggerhead Shrike. Much of our knowledge of the separation of these two species visually has come from scientific collections held in a number of museums and scientific faculties around the world (not to mention the science required to build the camera that took the picture!) [photo by Sam Galick]. 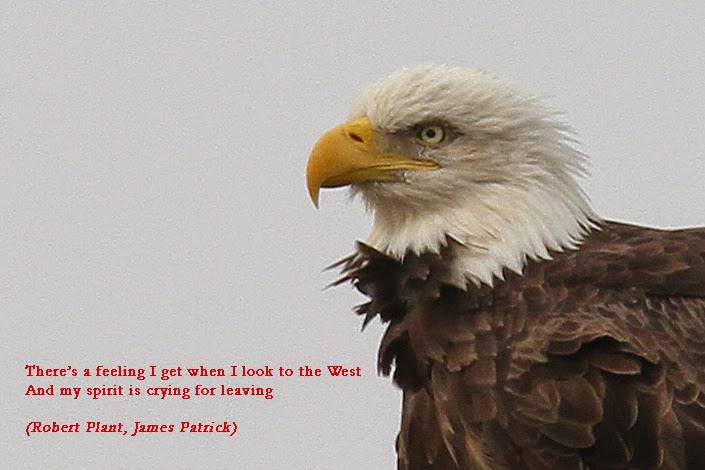