Birds are truly exceptional, perhaps close to unique - though dog and cat owners might disagree - in the way that they work their way into the hearts and minds of people. Throughout the history of our species, birds seem to have held a variety of roles, ranging simply from food, to essential companionship. Birds, it seems, are important to us and I was fascinated to discover recently another link between birds and people that I was unaware of, but that is very apposite given the pie-filled festival that looms on the horizon - Thanksgiving!

The humble Magpie has a checkered history with mankind; most often seen as a symbol of theft and implicated by many (mostly those who don't apply science to their thought process!) as instrumental in recent downward trends of songbird populations, conversely, they also attract a special reverence, often coming to light in the nursery rhymes of children, and regularly featuring in the writings of great authors such as Shakespeare and Chaucer. Magpies are found throughout the temperate Northern Hemisphere in both the Old World and the New World (modern taxonomy not withstanding) and are obvious to us due to their noisy chattering calls and their striking black and white plumage. We have no magpies in the Eastern USA - for which we should feel hard done by - but they still remain familiar to all, and tales abound that include magpies.

So what is this new connection? Well, etymology is a subject that has long fascinated me; that is, the origin of words and how they come about and evolve. It is well-known that the word 'pied' refers to anything that is black and white - thus,  the word magpie is said to be a contraction of 'maggot-pie', the pied bird that eats maggots. All well and good, but where does the word 'pie' come from originally - and why is it used for a black and white bird as well as for something that we eat. Well, I was recently reading that the word 'pie' for the thing that we eat actually comes from the pied appearance of the contents of a pie. Not so much black and white, but certainly an assortment of textures and/or colors. Similarly, the often widely varied list of ingredients that go into a pie is said to bear a resemblance to the Magpie's liking for collecting a miscellany of objects to adorn the nest.

There is much written about this in such learned tomes as the Oxford English Dictionary and no need for me to repeat it all at length here. Suffice to say that, as well as celebrating the humble Turkey on Thanksgiving, I think we should also raise a glass to the wily Magpie as we tuck into pumpkin pie - and I'm prepared to bet there will be other birds around the table tomorrow too. So here's a challenge: how many different birds can you find associated with your Thanksgiving celebration? For a few clues, don't forget to check out the wine or beer labels, the brand names of the various food items used in preparing the meal and pretty much anything else going on around you - what about the names of the sports teams you may very well be enjoying (or suffering, depending on performance!) on the day... 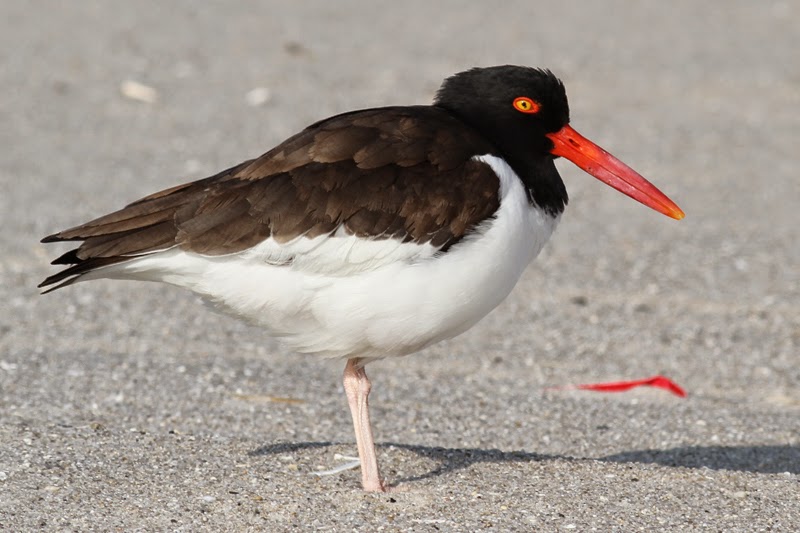 We may not have Black-billed Magpies in Cape May, but we do have American Oystercatchers. An old name for the oystercatcher was Sea-pie, a name which continues the affinity between a melding together of contrasting colors in birds, and the richness of ingredients in a tasty pie [photo by Mike Crewe].

Don't forget - we'll be out in the field on Friday with our 'Walking off the Turkey' stroll at the wonderful South Cape May Meadows. Come and join us at TNC's parking lot on Sunset Boulevard at 9:00AM for a light-hearted, end of season bird walk - surprises are guaranteed at this time of year!! [Photo by Mike Crewe]
Posted by Mike Crewe at 3:52 PM