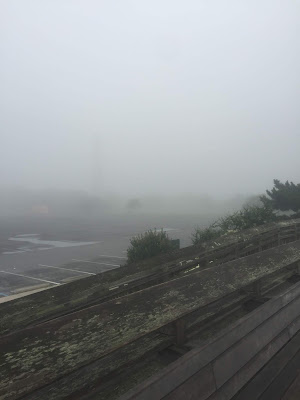 [Morning view from the Cape May Hawkwatch,
with visibility under a quarter mile. Photo © Tom Reed.]

Weather: Dense fog dominated the first half of the day, with gradual clearing and plenty of sun (temps reaching well into the 80s) during the afternoon. Scattered thunderstorms also formed during the afternoon, and while most stayed well inland, one affected the northwest corner of the peninsula. Winds were again light from the east/southeast and a trace of rainfall was recorded at West Cape May.

Birding summary: A predictably quiet day, but a few highlights included 2 Gull-billed Terns that spent time around Cape May Pt. State Park, a Sora at the South Cape May Meadows, fair numbers of songbird migrants along the State Park trails, a small pulse of Osprey and Peregrines that moved past Cape May Point during the mid-afternoon, and several Common Nighthawks around Cape Island during the evening.