Eagles in the Fog + Reports Here and There 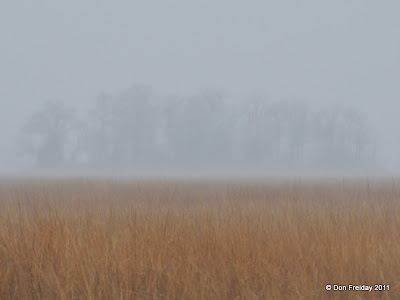 [Note the "obvious" active  Bald Eagle nest, just right of center. . .Newport Landing during Saturday's Cumberland County Eagle Festival. It was kind of foggy. . . off to your right, off screen, there's a light morph Rough-legged Hawk perched on a low post. A great day in challenging conditions. Click to enlarge all photos.]

Well, we got kinda fogged for the 10th Bald Eagle Festival, but nonetheless a good time was had by all.

Following Bill Boyle et. al.'s epic Razorbill flight on Sunday, which was completely off the charts, Tom Reed had a single at Cape May's Cove Pool heading south today. Tom also relocated the continuing Grasshopper Sparrow at Cove Pool, which is a.k.a. the Mt. Vernon meadows crossover in Cape May. An Eared Grebe was at Avalon today as well. 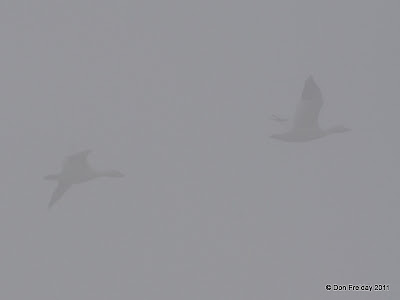 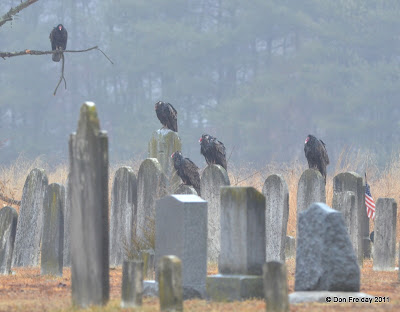 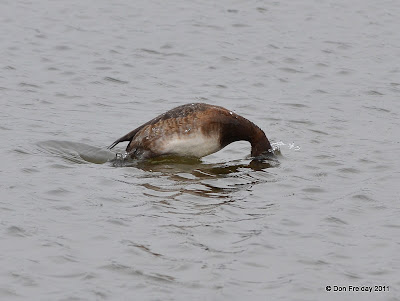 [In the wake of Tony's diving duck post below, here's our next quiz bird. . .note how fluidly it is diving, and that it doesn't use its wings, a good clue. . . it's a duck, anyway] 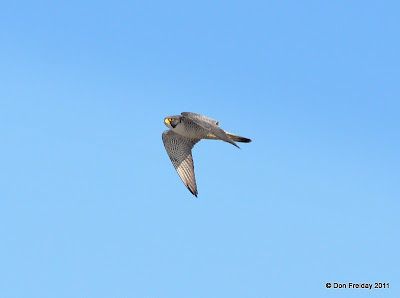 [Wandered up to Forsythe on Sunday, this is one of the resident Peregrine Falcons.]

[The white or whitish birds here are Canvasbacks. I counted 170 from the south dike tower at Forsythe NWR on Sunday, reaching the same number on two separate counts. . .either I can't count, or there were a lot of Canvasbacks, possibly northbound birds pausing at the edge of the east coast ice line. . .click to enlarge.]
Posted by Don Freiday at 7:19 PM