Spring and Spiffiness, both part II

With the temperature as measured by my car reaching 65 degrees today, I was out with Mike Crewe looking for something to be found. Though we enjoyed the day, the duo of Sam Galick and Tom Reed beat us out by actually finding some interesting found things. The first of these was a Tree Swallow (TRES) first heard high overhead and then coming down to make a circuit of the pond at the Beanery. As there certainly haven't been any around all winter, the wee beastie was certainly an arrival. In contrast, the two also saw an American Tree Sparrow (ATSP) there, one of the fair number of wintering individuals of this locally scarce species, and a flock of 143 Rusty Blackbirds (RUBL).

While Sam and Tom (mind if we call you 'Dave?') were scoring Tree Swallow, Mike and I were searching the bayshore for either or both of the Black-headed Gulls, with no luck. We started at the Ferry Terminal and hit most lookouts all the way up to the Cox Hall Creek mouth. Of course, during this time, Sam and Dave, I mean Tom, were reporting on six Forster's Terns (FOTE) at Miami Beach. Truly unfair. Here I am searching south on the bayshore for interesting birds, when I should have been looking from my yard at Miami Beach! As with the Tree Swallow, there have been no Forster's Terns around this winter, so they're arrivals of at least some sort.

Upon returning home, I immediately headed out to look for the terns, quickly finding them off the spit at the mouth of Fishing Creek. As it was dead low tide, I trudged out to get photos of the six birds on the beach with some 16 Bonaparte's Gulls (BOGU). The shifting and departure of a few Bonaparte's revealed a seventh Forster's Tern that had been hiding. Unfortunately, I couldn't get all seven birds in the same frame, but the below picture shows six of 'em, and I could barely get the sixth one in the frame. 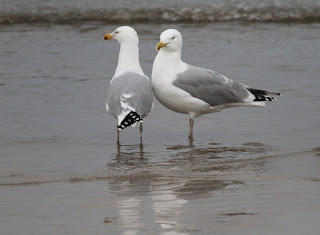 Note that their heads are spiffily white, thus probably local breeders, in strong contrast to the next-door Herring Gull, which is almost certainly a wintering migrant from farther north, as it retains most of its streaky-headed basic plumage (below). 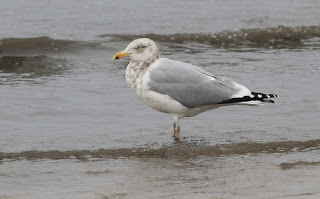 Finally, as another sign of the advancing season and hormone loads, Mike and I noted a pair of Black Vultures (BLVU) copulating just north of the West Cape bridge.
Posted by Tony Leukering at 4:03 PM