This is very cool: CMBO volunteer leader and Stockton College student Kyle Rossner sent me a note about what the Black-headed Gull in a previous post from me was eating (that previous post, by the way, developed some technical issues and had to be deleted, sorry about that!) Here's the original photo: 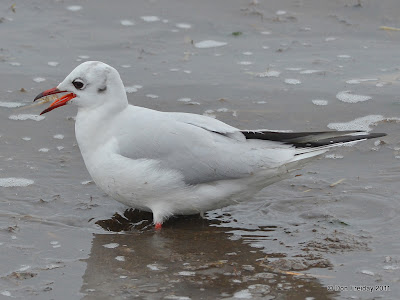 And here's a cropped image showing the gull's prey: 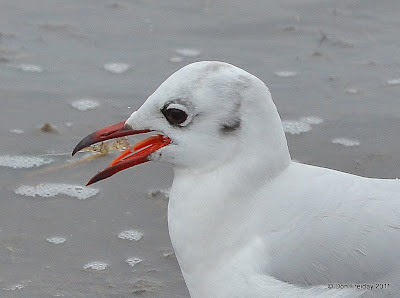 Kyle writes: "I talked to some Marine Science folks over at Stockton about the Black-headed Gull's food of choice in your recent post. At first, I thought that it was a sand shrimp (Crangon septemspinosa), and that seems to be the likely candidate. Sand shrimp are likely to be found in surf area sand, since they have a slightly shovel-shaped beak that allows them to dig under the sand in rough conditions or to escape predation. The size and proportions also seem consistent. This is also a species that, according to my younger brother, is caught in abundance by Cape Tech's Natural Science students around the area."

Now, on to the photo quiz: 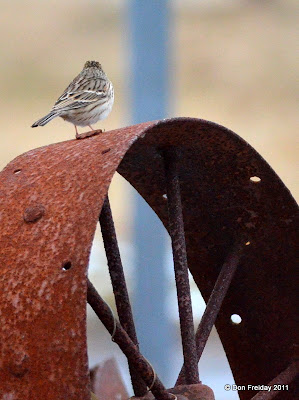 [This should have been a "gimme" if you noticed the little patch of chesnut on the shoulder (technically the lesser coverts), but what if you didn't or if we couldn't see that, as you often can't? Would this bird have stopped you? It's not scaly and it's out in the open, so not an Ammodramus. It's not showing much in the way of rufous tones, which eliminates a bunch of other possibilities. Not all streaked-backed things are streaked the same way. This one has very obvious, uniform streaks. . .] 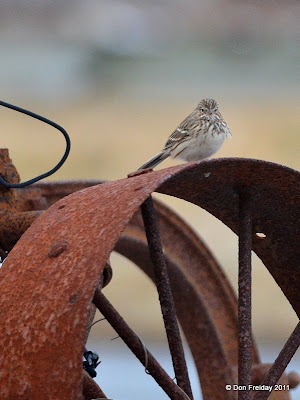 [. . .and it's a Vesper Sparrow. We can see the eyering, finely streaked crown, and even the white outer tail feathers, which fold underneath the tail so you can't see them from above unless the tail is spread. Field guides emphasize the dark frame to the cheek (auriculars) but I think of Vesper Sparrows as looking plan-faced compared to similar birds, in part because they lack a prominent eyebrow (supercilium). This Vesper Sparrow was at the corner of Bayshore Road and Stevens Street in Cape May last week, one of three consorting with Savannah Sparrows there.] 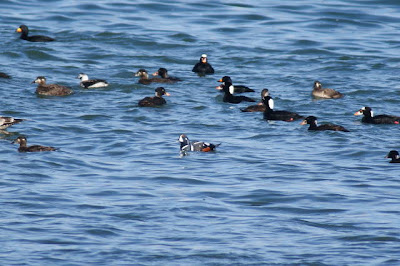 ﻿[Jeff White photographed the Harlequin that's been wintering at Avalon on Saturday. It's been a nice little spectacle of sea ducks there, normally best viewed from the jetty at the end of 8th street, with Surf and Black Scoters and Long-tailed Ducks, loons, etc.]
Posted by Don Freiday at 2:05 PM