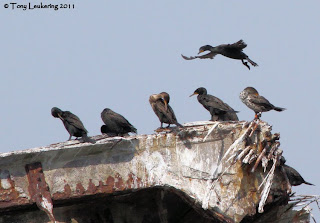 Yesterday morning (3 May), Michael O'Brien, Louise Zemaitis, and I had a late breakfast at the Sunset Grill at Sunset Beach. I was scanning through the Double-crested Cormorants perched on the Concrete Ship when I noticed the rightmost bird was wearing a somewhat-odd plumage, so I looked at it more closely. At that point, I noticed a big patch of reddish-orange on the leg and told Michael and Louise that the cormorant was color-banded! Off and on over the next hour, Michael and I ogled the bird through the scope at 50x. Unfortunately, we were looking right at the gap between two iterations of the alphanumeric code on the band, so we had the devil of a time trying to suss the alphanumeric. We eventually decided that it was something like '0E0' (maybe OEO). I took a lot of pictures hoping that I'd be able to suss the code on my computer, but to no avail. I sent a picture of the bird along with my report to the Bird Banding Laboratory (BBL) about the bird that afternoon.

Michael and I had discussed whether it was more likely from Lake Ontario or from farther up the East Coast, both options seemed about equally likely to us, or, at least, not of such differing possibility as to make one much more likely than the other. Well, I just got the reply from the BBL in the past half-hour: the bird was banded with color band 0E0 as a nestling by Dr. Susan Elbin in a colony near Fort Wadsworth, Staten Island, NYC, NY. Ain't great optics, well, great!!
Posted by Tony Leukering at 10:05 PM