[All pictures copyright by Tony Leukering. Click on image(s) to see larger version(s).]

In past Spring and Fall events run by the Cape May Bird Observatory, which were "just" weekend events, there was no time in which to run a real pelagic trip. The "Poor Man's Pelagic" trip, a trip over and back on the Cape May-Lewes ferry, was a feature of most of those events and were always well attended. This Spring, we made a change.

SeaLife Paulagics organized a pelagic trip to Cape May County waters on the Atlantic Star that departed around 11 pm on Thursday night and returned shortly before 6:30 pm Friday evening. We even scored one species with "pelagica" as part of its scientific name: Chimney Swift (about 75 miles out)! I will leave to Tom Reed the numbers aspect of the reporting of the trip, but will steal at least some of the thunder by presenting a few pictures from the trip.

Because it was a "real" pelagic trip on a chartered vessel, we could chum for birds, resulting in extremely good views of numerous species, including the above picture Wilson's Storm-Petrels. And the below Sooty Shearwater (one of many seen). 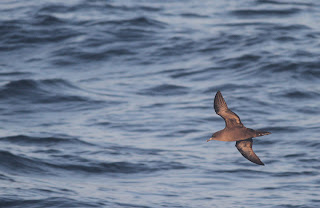 We cruised over water that was up to 1400 feet deep in nicely warm water (~70 degrees) with lots of Sargassumweed. Highlights in that water were a large number of Portuguese Man-o'-wars (Men-o'-war? Mans-o'-war?)... 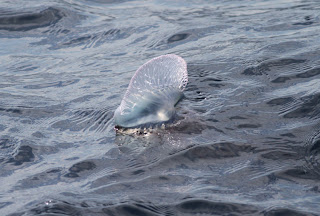 [A quite dangerous creature if you're in the water with them, Portuguese Man-o'-wars are strikingly attractive jellyfish with the subtly-colored bags of air that they use to coopt the wind into moving them around.]


... and a goodly number of pretty pelagic phalaropes.

[These Red and Red-necked phalaropes, most of which were in alternate plumage, made for quite a lot of 'oohing' and 'aahing.']

Interestingly, and perhaps predictably, we saw the most action when we were on our way in, trying to make the scheduled 5 pm return. It seemed that the ocean did not want us to leave, so kept throwing interesting things our way, including our only whale of the trip, a briefly seen Minke Whale. Of course, we were obliged to slow our passage or, even, turn around in order to enjoy these treats. 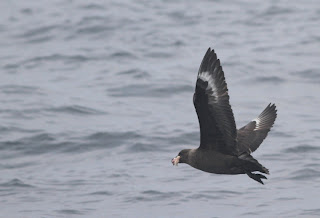 [This South Polar Skua put in a fairly long and much-appreciated visit on the run into shore. Mike Fritz threw it a big fish that probably kept it around longer than it might otherwise have stayed.]
Posted by Tony Leukering at 8:20 AM